Two weeks ago, Johnnie Watson was competing in the quite-incredible Tor des Geants (“Tour of the Giants”) race. This is Johnnie’s report of his week amongst the giants:

The Tor des Geants is a trail race around the Aosta valley in the Italian Alps. It’s been on my radar of a few years but I needed to wait for the green light from my wife. The stats are amazing, 330 km, 24,000 meters of climb, average altitude 2000 m and single stage. It was difficult to get a place as it’s very popular but luckily, I managed. I trained by doing as much climb as I could, and made sure I ran in the dark and through the night a few times. The longest I had run this year was the Fellsman, I was hoping for longer but injury and time conspired against me. People ask how you train for a race like this and I have no good answer, every race that you have ever done becomes your training and adds to your endurance. I did the Spine race a couple of years ago so knew I could cope with little sleep and constant motion. And I have also run the UTMB so thought I would be able to cope with the altitude. 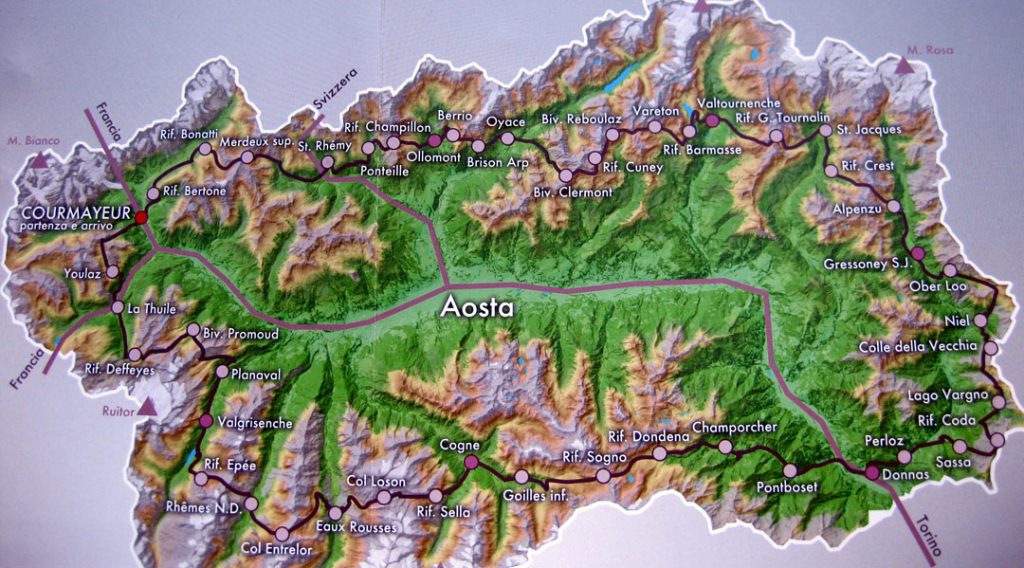 The race starts in Courmayeur and loops anticlockwise around the Aosta valley. It passes through a main town every 50km or so. Here, there are ‘life bases’ where runners can get a meal, shower, massage, sleep etc, but the clock keeps ticking. Each runner also has a drop bag that is transported to the life bases. The race also passes many mountain refuges where food and rest can be found but you’re limited to a 2 hour stop. Before the race, people talked of race and sleep strategy. I was hoping to come in in around 120 hours so had a rough schedule but was not sure about sleep. I had heard the life bases were very noisy so planned to sleep for short periods at the refuges.

I can’t give a step by step account of the race as I don’t remember a lot of it, so I will concentrate on the key points.

This is without doubt the most spectacular race I have been in. It gives you a sense of an epic mountain journey and exposes you to every mountain landscape. The climbs go on for ever, you go through town, wood, pasture and then up to the high mountain. A lot of the climbs are 1500m and more. The highest point on the race is col Loson at 3300 m. this is after a 1650m climb. I was struggling to breathe up there and was glad it was daytime and in good weather. Some of the descents seem to go on forever with endless switchbacks and village lights that get no nearer hour after hour. The ground is generally no more technical than what you will see on the higher Lakeland fells but there is some via ferrata and fixed ropes on the higher cols. Navigation is easy, just follow the yellow flags with reflective strips for night time, every 10 to 20 meters without fail. I took maps but never used them. 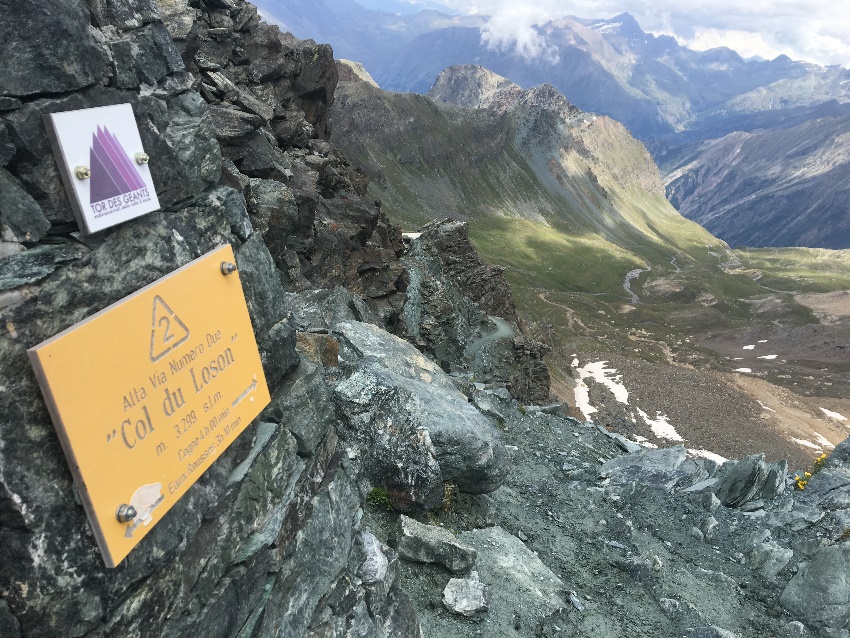 We were lucky with the weather, warm sunny days and cold clear nights generally. A weak front came through on the second half of the race and gave some rain and snow as well as some strong winds, but it only lasted for 12 hours and just made the place look more dramatic. I heard some people had to use their crampons (mandatory kit) to get over Col Malatra (last climb). It was just muddy when I went over, but at night this would have frozen. I was just lucky with timing. The course was very dry, with very little mud in general. A lot of people suffered with bad chests from breathing so much at altitude (where the air is much dryer). Covering my mouth and nose with my buff seamed to help but I was still coughing loads at the life bases.

I ran in Montrail trail shoes with orthopaedic insoles. I did take my size 11 Salomon Fellraiser but my feet never swelled up that much, maybe because it was so dry. I tended to my feet at every chance and got some blisters but never suffered with them. Shorts and t shirt during the day and tights and long top during the night. High cols at night were very cold, I packed my woolpower 200 top and this was perfect. Some runners wore down jackets. An altimeter was part of the mandatory kit list, useful to monitor your progress up to a col or down to a refuge. However, a double edge sword when on the countless switchbacks, so much time and distance for so little change in altitude can play havoc with a tired mind.

The mandatory kit is what you might expect, shell and warm clothes, basic emergency gear, altimeter, crampons, food and water etc. Everybody used poles, except me. I didn’t see another runner without them. So many people commented on this fact to me. Maybe they had a point… 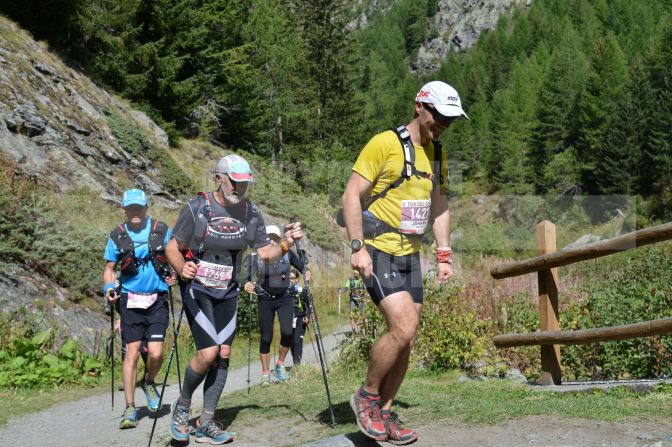 I know I am a slow runner, to give myself a chance of a 120 hour finish I knew I had to keep the sleep to a minimum. I ran with Matt Neale for the first section of the race, we kept up a comfortable pace and made the first life base in 13 hours. Here Matt had an hour’s sleep, I carried on and had my first sleep at refuge Sella (about 100km) after 29 hours. I asked for an hour but woke after 45 mins. I think I slept 10 times during the race, most were for 45 mins but I had longer sleeps at the last two life bases, not sure how long but less than 2 hours. I tried to get into the routine of sleeping just after sundown and then just before sunrise. Sunrise in these mountains is spectacular, this gives you a lift, and coping with tiredness is much easier in the daylight. I did not sleep during any daylight hours for this reason. I did however have a few powernaps, just close my eyes for a minute, let your head bob and this means you had some sleep. Even if it was for 5 seconds it helps you concentrate and keeps you going. In total, I think I probably had between 6 to 8 hours sleep during the race. This is much less than I had on the Spine race and I didn’t really suffer with sleep deprivation or hallucinations.

This race is so well organised it is amazing. It just works perfectly without being obtrusive or officious. I cannot think of anything that could have been done better. Local volunteers staff the life bases and are very keen to help anybody who needs it. They will take you to find your drop bag and find a bed, and wake you up when you ask. There is a sense of great pride in the race and in the area, many check point have local dishes or delicacies, I remember having some fantastic ravioli somewhere and fried crispy cheese with soft cheese sandwich somewhere else. Everybody you run past on the course shouts encouragement. Earlier on there are groups of people on the higher passes who have obviously made a special trip to support the race.

I would put this race harder than the Spine race, others disagree. Maybe I am just well-practiced at running over bog. I struggled with the altitude on the Tor, I have been to higher altitudes and not felt it as much. I must have acclimatised a bit during the race as I was less affected later on. I finally finished the race on Friday evening at 20.31 giving me a race time of 131h 18m. which was good for 206th place. The GPS tracker clocked up 339 km and 30908 m of total climb.  If I did the race again I would probably use poles, I would also learn more Italian and would try to get some acclimatisation in beforehand. My memory now of the race is rose tinted by time. At the time, I remember thinking the race was just too hard, I was cursing myself for entering as I would now have to suffer to finish.

The race-ratings page now has a summary for all of us of our results in 2013.

While the LCT website is (hopefully temporarily) out of action, here are the results in the Lakeland Classics Trophy after the final race: