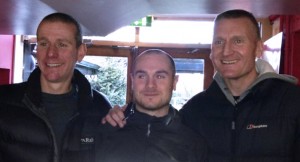 Ashurst Beacon, perhaps the most famous landmark of Skelmersdale is the Beacon at the top of Ashurst Hill and stands at 173m above sea level. One of a chain of Lancashire beacons which stretched from Liverpool to Lancaster Castle, it was built in the 16th Century by Sir William Ashurst to serve as an early warning system against invaders. Now it commands a magnificent view point over many counties and on a clear day visitors can see the mountains of Snowdonia, the Cheshire Plain, Blackpool Tower, the Lake District Mountains and the panorama of Liverpool and the Mersey.

Getting Calder Valley Fell Runners over the border is not easy but with no other races on it was a case of get over there, show them Lancashire folk how to run and and get back quick! With a couple of CVFRs elite men, Tim Ellis and Shaun Godsman, on the start line, the team prize was almost certainly in the bag with Robert Paradise and Stephen Smithies hoping to join them.

Although bright and sunny it was bitterly cold but with a fast and furious downhill start the majority of runners were happy to run in vest and shorts. This race is unusual as it starts with a fast and furious descent and finishes, for those not in the know, with a sting in the tail climb. The descent from the pub adjacent to the Beacon is probably as fast paced as you can ever run and there will be plenty of aching calf muscles in 40 or 50 minutes time! The descent takes you down to the Leeds/Liverpool Canal before climbing up towards Parbold Hill. A short stretch of road precedes the descent through Delf House Wood and then it’s across muddy fields before crossing the canal again and starting the climb up to the Beacon.

Tim and Shaun immediately hit the front and with Tim looking stronger he eventually won the race by almost a minute and a half. Shaun eased home in second place almost a minute clear of local runner John Hunt. Stephen in thirteenth place edged out Robert to secure the team prize. Ironically, Tim, Shaun and Stephen are all Lancashire lads!

159 runners completed the race and the lady winner was Amanda Crook of Southport Waterloo in an excellent twelfth place overall. Ladies team prize was won by the superbly named local club, Parbold Pink Panthers, in their equally superb pink vests. Rumour has it that Robert ‘Catbeast’ Paradise has put in for a transfer.