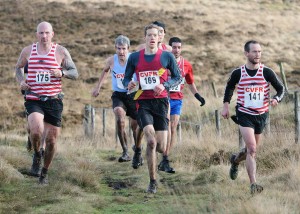 Calder Valley’s Thirza Hyde whipped everything including the weather into shape to deliver a hugely successful Half Trog. 114 runners set out across the moors on a bright and sunny November 11th, with Calder Valley’s Tim Black taking a commanding lead by the first checkpoint and looking well on the way to taking his first race win. By the third checkpoint the field was down to 112 as one unfortunate runner fell and apparently broke her wrist, and another pulled out to help look after her. This incident illustrates once again why the safety kit requirements exist, and that you never know what a run on the moors is going to throw at you.

By the fourth checkpoint, saving a total navigational disaster or unpleasant injury, Black had the win sewn up. Battling it out some way behind him was a group of runners containing Calder’s Robert ‘Paz’ Paradise and Ian ‘Ultra’ Symington. Paradise felt strong, but didn’t have the local navigational knowledge to try and push on ahead in the second half of the race, where a little local experience of the many narrow trods across the moor can make all the difference.

As expected Black took the win easily, at more than seven minutes ahead of second place John Raho from Holcombe Harriers. Sprinting in for third place behind Raho, Symington just pipped Paradise to the finish, showing that he has the speed for the shorter races as well as the stamina for the ultra runs we’re used to seeing him excel at.