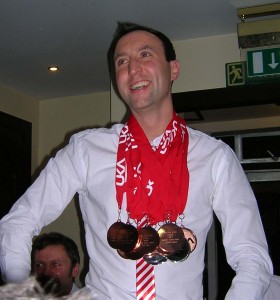 Not content with winning the majority of medals on offer in the English and British champs this season, CVFR set out to dominate the presentation evening dinner too……and dominate we did!
Our lads were immaculately clad in matching outfits (surprisingly nothing too offensive or skimpy!) we were the envy of every other club in the country as they soon realised that our banter and team bonding have both been taken to a whole new level this season.
It was a night of pure celebration from start to finish… Earl Gray, Sally and La Capitana earned the biggest applause by far, mainly because we were out in force and collectively in very fine voice. Shaun also won the award for tightest pants of the night, not hard really as we all know he’s let himself go this season. It must have taken him ages to get them on over that waist – I imagine a lot like trying to get toothpaste back in the tube. Although he didn’t win a medal for this he got plenty of abuse from everyone in the room #standard
As El Capitano I obviously represented the club in a very sensible manner, I only had a pint of two and then was in bed at an early hour 😉 Everyone else partied long into the night and celebrated a historic season, without doubt the best yet for our talented club (just ask Mad Legs Mulholland for further details- I think he’s still hungover hahaha!) It’s also worth pointing out that we were a dominant force on the dancefloor, we all busted some serious moves and showed everyone else how to party CVFR style!
It was a fantastic night and one which I hope we can repeat and perhaps even surpass next season! If you didn’t go then please get involved next year…I’m already thinking of outfits for next time…be afraid, be very afraid 😉
El Capitano xx