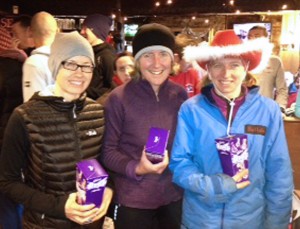 One of Yorkshire’s best-loved fell races went off in dry conditions last Sunday, as 270 runners lined up for the Yuletide 5 miler that is the Stoop which attracted some quality athletes to the hills and fells near Halifax.
Winners on the day were Ilkley Harrier, Tom Adams and Calder Valley Fell Runner, Helen Fines, though both were a little shy of the course records.

The men’s race was probably going to be a three-way battle between Adams, 2011 winner, Sam Tosh and Lancashire raider Rob Hope. Pudsey and Bramley man Hope had a fine run at the Really Wild Boar race the week before and was looking in sprightly form as he, Tosh and Adams headed up the field in the first mile or so.

One stand-out figure was Ian Holmes. The Bingley man decided that he was going to wear a little more than the obligatory Santa hat which all runners wear to this race, and donned full Santa regalia. Still, didn’t seem to hinder him too much as he claimed an excellent 5th overall, and of course a clear win in the V45’s.

As the leaders headed back on the descent it was Hope though who tried to get away, putting in a dig, but Adams wasn’t going to let him get away. The Ilkley man claimed a 15 second win in the end, looking comfortable as he crossed the line in 31:30, with Hope (31:45) holding off a fast-finishing Tosh (31:49) for second.