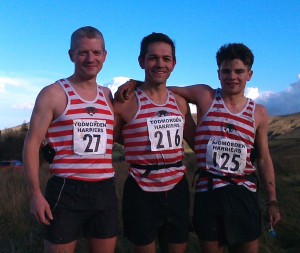 The twenty seventh running of this very popular race was held on a clear but very cold day from the Shepherd’s Rest Inn, above the town of Todmorden. The race is classed as a ‘B Medium’ with 1,150 feet (350m) of climb over the six and a quarter mile (10k) course.

With almost three hundred competitors and a bottle neck within yards of the start a lightning fast getaway is needed by any ambitious racer. The first mile is a steady runnable climb up to Langfield Common followed by a fast but boggy and rocky run across to Stoodley Pike via Coldwell Hill and Stoop. The descent off the Pike is via the shortest, steepest route and for those brave enough to take it on there are places to be gained and seconds to be saved here. At the foot of the Pike the route hits London Road where faster running is available. For those in the know it is wise not to goo to rapid across here as a second climb waits. This climb has a tougher gradient and with mud and bog thrown in only the fittest run back to Stoop. From Stoop it’s a gentle climb back over Coldwell Hill before a fast and tricky descent back to the Inn.

272 runners entered the race and all but seven managed to complete the course. The first three runners home were all representing Calder Valley Fell Runners (CVFR) with Karl Gray leading in James logue and Max Wharton, Max being first under 18 competitor. Karl’s time of 44:56 was a couple of minutes slower than expected due to the wet, boggy and muddy conditions underfoot. Not surprisingly CVFR men took the team prize with Stephen Smithies making up the fourth member.

This year’s Original Mountain Marathon or OMM as it is known took place in the Howgill Fells above Sedbergh, Cumbria and taking part in the Elite class were Calder Valley’s Jo Buckley and Barbara Lonsdale. Jo and Barbara not only know how to run all day but also how to navigate at speed too and these skills enabled them to win the lady event in a time of just over 16 hours! A tremendous achievement for Jo and Barbara.    OMM competitors need to carry everything they need for two long days in the hills, including tent, sleeping bags, stove, food and clothes.