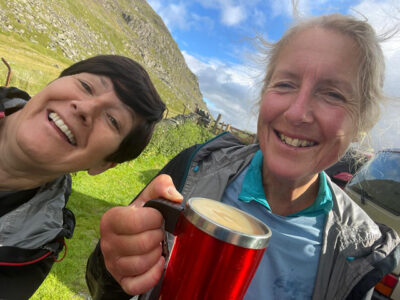 Having just celebrated her 60th birthday only 4 days before, Jackie Scarf set out at 4.37am on a luxurious 17 hour 30 minute schedule, on Wednesday 14th July 2022 to complete the Joss Naylor challenge. This is a challenge for … Continue reading →

After the National and Club Championship races of last weekend, it was time for the Calder Valley ultra-bunnies this weekend at the Lakeland 50 and 100 races.

The 100 mile circular route encompasses the whole of the Lakeland fells, includes in the region of 6300m of ascent and consists almost entirely of rocky public bridleways and footpaths. The route starts in Coniston and heads south before completing a clockwise loop which takes in the Dunnerdale Fells, Eskdale, Wasdale and Buttermere before arriving in Keswick. From here the route heads to Matterdale and continues over to Haweswater before returning via Kentmere, Ambleside and Elterwater to the finish at Coniston.  It has a dropout rate of 40% to 50%. 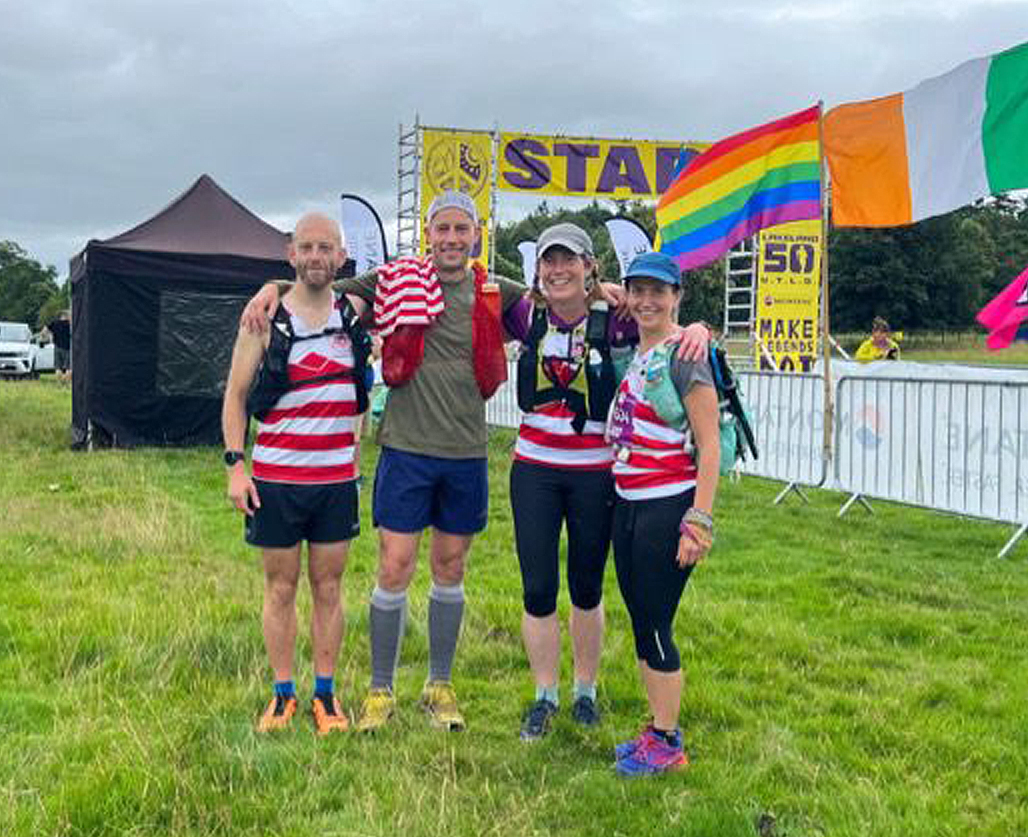 The 50 route starts at the half way point of the 100, the northern end of Ullswater.  The ‘shorter’ route has a 24 hour time limit for completion.

The route does not pass over any of the popular Lakeland summits. Instead, it weaves its way through stunning valleys, contours picturesque fells and cuts its own line through the amazing Lakeland topography.  As with any ultra race the key is to keep moving. 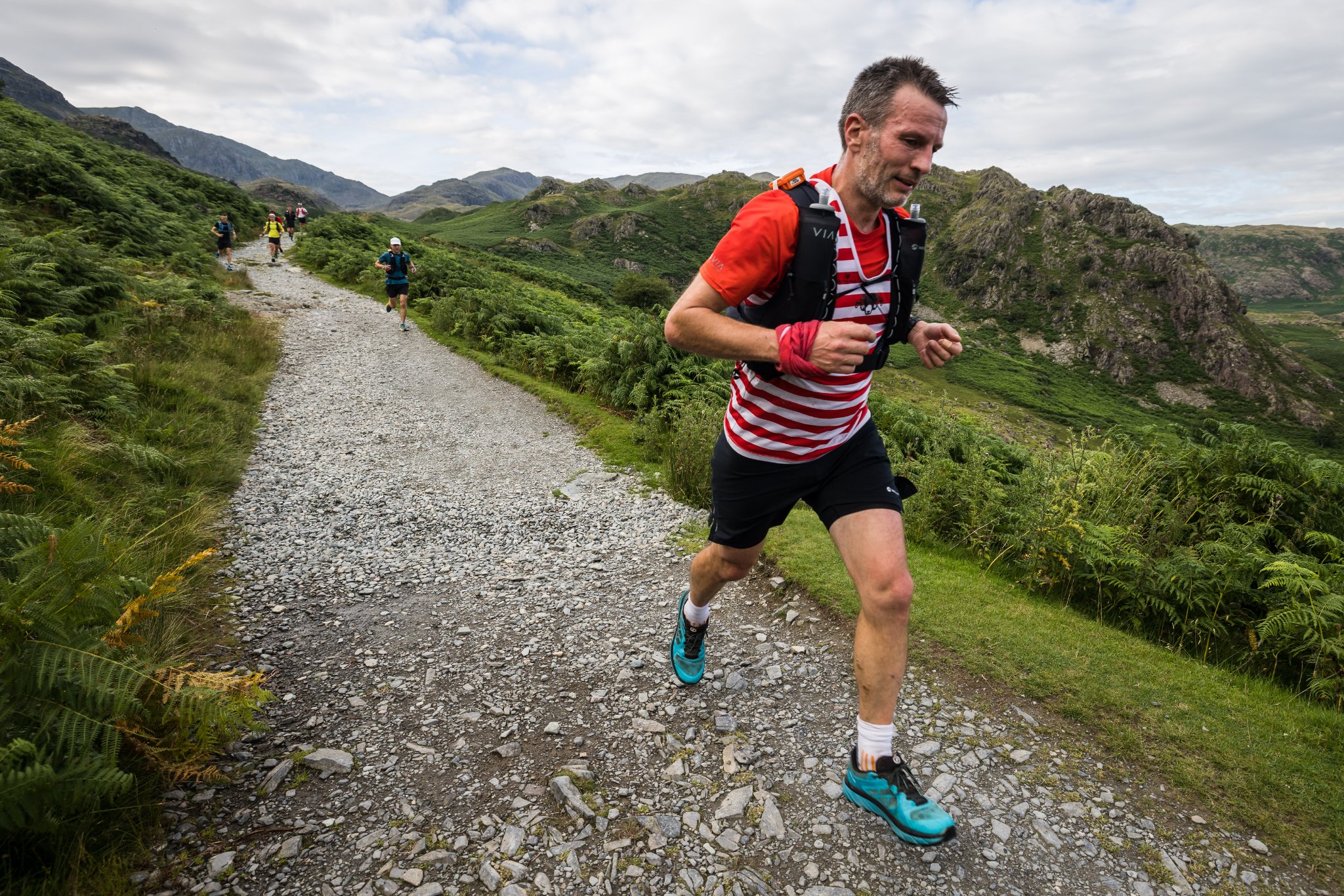 First back for CVFR in the 100 was ultra specialist, Dougie Zinnis in 16th place.  He said “A humid first night and tired legs made the going tough from the start. The rain held off until Black Sail Pass with  light showers turning to heavy in the morning. My stomach wasn’t good and I couldn’t hold food down which made every mile into a slog but decided to get it done, joining forces with Martin Davies (CVFR) and another lad called and Michael.”  Dougie finished in 25hr 29mins.  The winner was Ali Bailey in 20hrs 46mins and 1st female was Emma Stuart in 23hrs 5mins 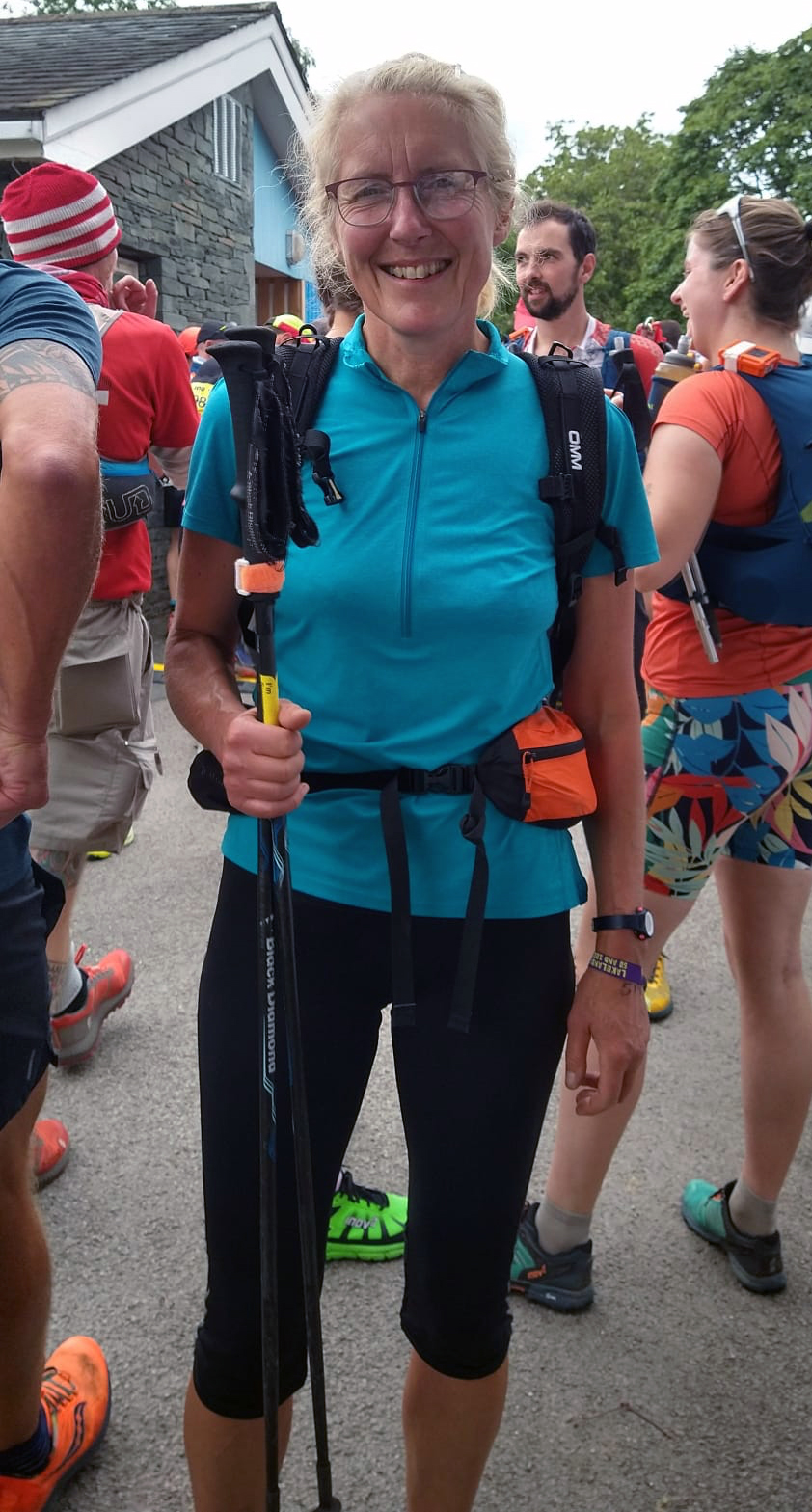 Jackie at the start still with intact feet!!!

Long time ultra-runner and adventure racer, Jackie Scarf, said “My feet have trench rot and huge blisters, the weather was a mixed bad of sun, cloud and drizzle.  The food and service at 14 checkpoints was good, marshals even did us a free alarm wakey-wakey if you wanted a power nap (I did twice). But I don’t intend doing that race again.”  Jackie completed the 100 in 39 hrs and 15mins.  Johnny Watson finished in 33 hours 37 minutes and Dan Biggs was the fifth CVFR completer of the 100 in 39 hours and 27 minutes. 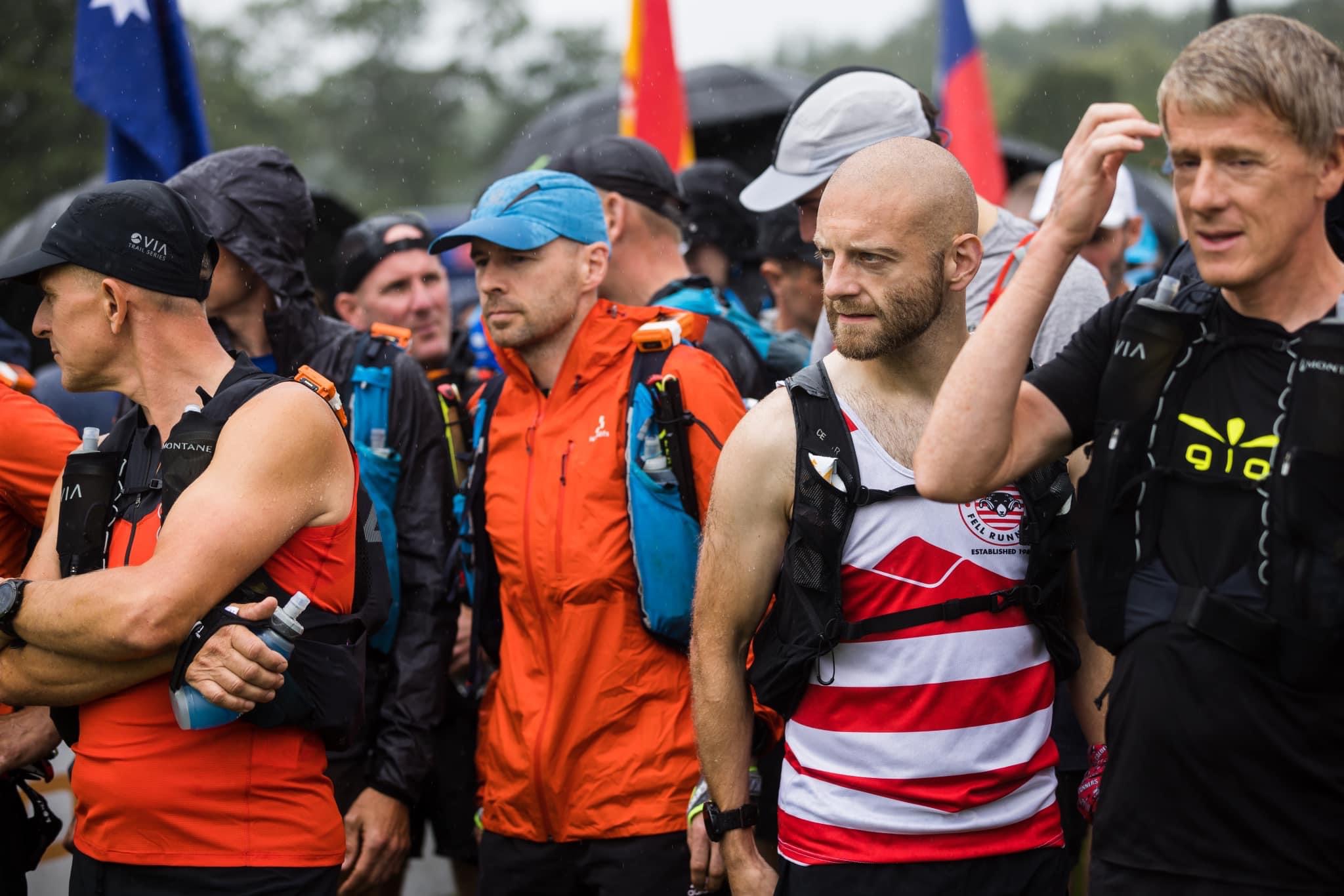 Andy with his ‘game on’ face. Photo courtesy of No Limits Photography

In the 50, Andy Ford started like a whippet on a 5 mile race.  He suffered for it later though, struggling to eat. However he was first Calder runner back in 15th place covering the 50 miles in 9 hours 5 minutes. Luke Meleschko was 131st in 11hrs 24mins and Laura Green and Gill Dickson paired up to finish in 16 hours 15 minutes at 3:45am.  Laura said it taught her a lot about pain in general and trench foot in particular. 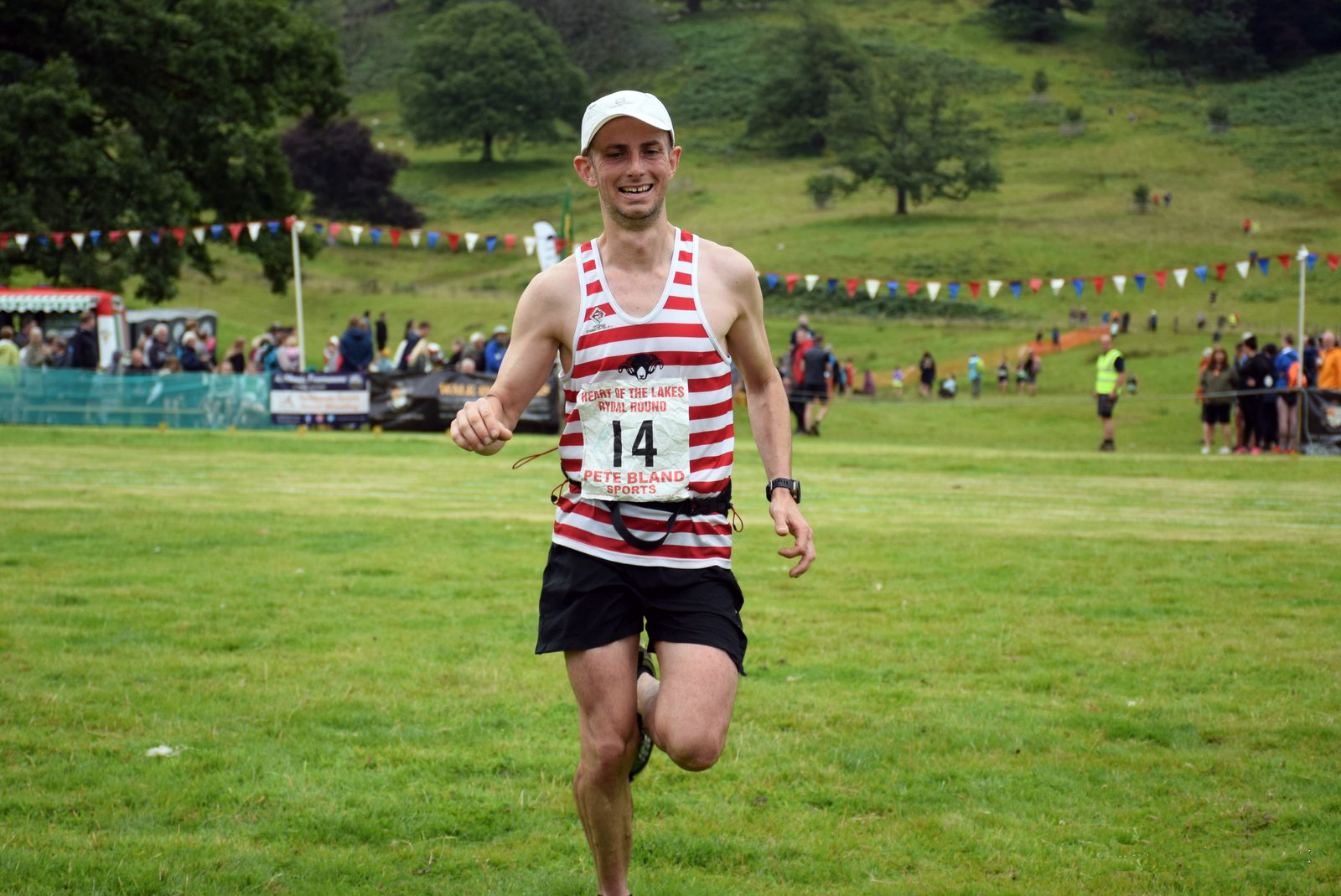 The Grasmere Sports are a celebration of Cumbrian sporting activities.  This includes two fell races along with grass track racing, grass cycle racing, children’s fun races, hound trailing and Cumberland wrestling.  Last Thursday, Calder Valley’s Andrew Worster, Steve Smithies and John Underwood all decided to try out the 9 mile Rydal Round fell race, with 3000’ of climbing up to Fairfield and back. Andrew describes the race; “Starting in Ambleside in the light drizzle this made the rocks very greasy leading to slower times for everyone.  From the start Ricky Lightfoot and local runner Tom Simpson from Ambleside soon had a good lead on the rest of the field. They kept the lead all the way round the race but Ricky who’s the record holder and multiple winner of the race did at one point on the descent ask Tom which way to go! I was 7th on the base of the climb and I stayed with an Ambleside runner called Sean who took some good lines and avoided unnecessary summits. By the top of the climb I was in 5th having closed a 45 second gap to 15 seconds in the battle for 3rd place. It was clear from the first tricky rocky descent that Sean, who was in 4th place at this point, wasn’t quite as quick on these greasy descents. I overtook him and held him back on some very sketchy lines on slippy rocks. 3rd place Steve Jaques had the legs to keep me off the podium by keeping a gap until the finish line.”

After finishing the Rydal Round Andrew said he felt pretty fresh and probably should have pushed harder on the up at the previous race.  So he quickly signed up for the BOFRA Ambleside Sports Guides Race. In contrast to the last race this is 1.8 miles with around 800’ of climbing. On the start line were the BOFRA pros including Ted Mason of Wharfedale, Simon Bailey of Staffordshire Moorlands, Rob Hope of Pudsey and Finlay Grant from Dark Peak.

Andrew said “I had nothing to prove. Being my first BOFRA race I asked some people for advice, start strong and finish strong seemed to be the advice. The flat field was my worry not the up or the down. The starting pistol went off and it was straight into that flat field. To my surprise the race wasn’t as quick as I thought it would be at the start so was in about 8th at the start of the uphill climb. I quickly took a few more to be 4th at about 50 metres from the top but I could feel the wheels falling off as Rob Hope passed me on the very straight forward easy grassy hill. My legs were like jelly but I had a good descent to hold 5th. All in all a good day out with a 4th and 5th finishes.”

The latest press report is now live!! Take a loo

🙌 if you're excited for weekend racing😁 Goo

Another week, another night of burning the midnigh

It's Tuesday which means, whilst we're not all run

#throwbackthursday to a massive week of racing las

BG Ladies set out on an adventure last night. As a

What a momentus Wednesday packed with changing new