Calder Valley’s Holly Page was back in the UK this week visiting family.  She decided to do a couple of low key fell races as a warm up to the Sierre-Zinal mountain race in Switzerland next week.  The results show she is on top form with a good chance of a podium finish in Switzerland.

First up was the Whittle Pike fell race from Cowpe in Rossendale.  A short but steep midweek race that packs 1400ft of climb (and descent) in less than 5 miles.

Holly was 3rd overall, 8 seconds ahead of Todmorden’s Graeme Brown.  The race was won by James Kevan of Horwich RMI Harriers.

Sunday saw the first running of the Saddleworth Round, a 17 mile yomp around the moors east of Uppermill, taking in Broadstone Hill, Dovestones Moss, Laddow Rocks before hitting the high point of Black Hill and a 5 mile gentle moorland crossing back to Uppermill.  Holly Page went two better than Wednesday night and won the race outright, despite taking an early detour to the Obelisk on Alderman’s Hill.  She beat Holmfirth’s Mike Fanning by 7 and a half minutes, setting the course record in hot conditions – perfect preparation for Sierre Zinal. 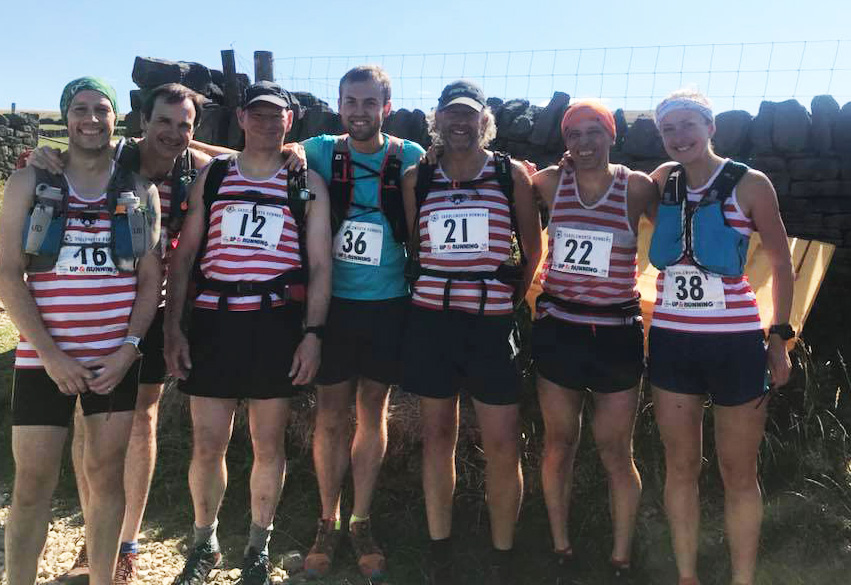 The team at the start of Saddleworth Round

As a counter in this year’s club championship a few other CVFR members ran at Saddleworth. Luke Meleschko came 7th in a shade over 3 hours; and new member Elliot Corner surprised himself by taking 11th place in 3:04:48.  Bill Johnson and Toby Sydes were 16th and 19th respectively around the 3 hour 20 mark.  Tim Brooks was 34th just under 4 hours and John Nunn was 44 in 5:09:30.

As one runner said at the end “Proper hot; fantastic route; great marshals and more cake and chips at the end than it would be physically possible to eat.”

And In France the legend that is Karl Gray won the ‘Trail de Megeve’.  There are 2 races one of 15k and 3000 ft of climb and 27k with 5200 ft of climb. Karl won the 27k race outright. An excellent result but not a surprise to us who know the calibre of the legend. 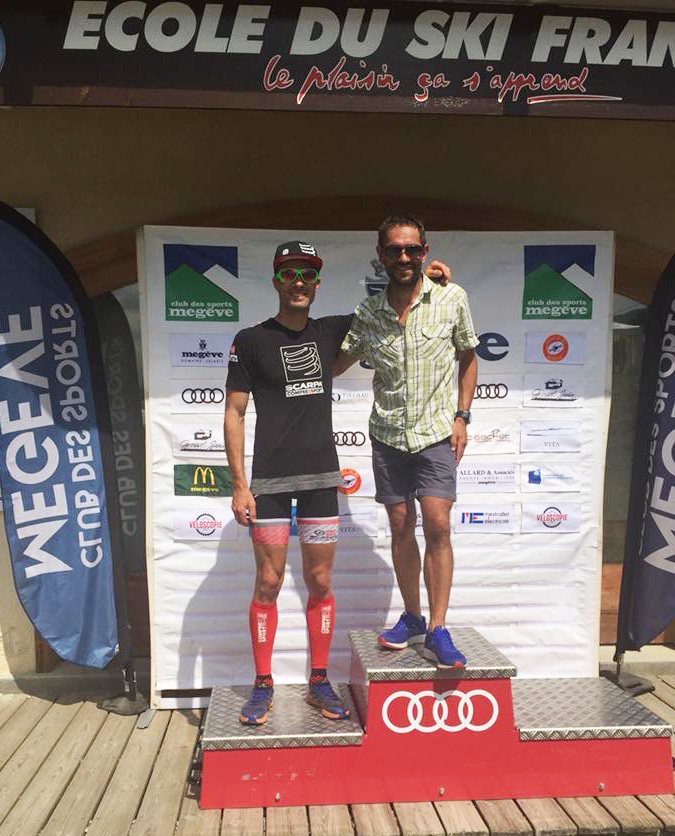 Karl on the top spot

Saturday’s Hellifield Gala race was also a short counter in this year’s Calder Valley Championship.  Perhaps because some were saving their legs for Saddleworth and some were on holiday, only two runners from CVFR took park, Johnny Croston and Karon Foster, both gaining the maximum 100 points.  Jonny in the open and Karon in the womens.