4 CV runners taking part in the epic Lakeland 50/100 mile ‘Ultra Tour of the Lake District’, renowned as the UK’s most spectacular long distance trail race. The circular route encompasses the whole of the lakeland fells, includes in the region of 6300m of ascent and consists almost entirely of public bridleways and footpaths. The route starts in Coniston and heads South before completing a clockwise loop which takes in the Dunnerdale fells, Eskdale, Wasdale and Buttermere before arriving in Keswick. From here it heads to Matterdale and continues over to Haweswater before returning via Kentmere, Ambleside and Elterwater to the finish at Coniston. It weaves its way through stunning valleys, coutours picturesque fells and cuts it’s own line through the amazing Lakeland topography. Some may consider that, with 40 hours available to complete this epic route, there is time to stop to admire the view but many competitors choose not to stop or sleep, challenging themselves to compete it in just over 24 hours. .

3 CV Ultra runners, Kevin Hoult, Simon Bourne and Johnnie Watson, completed the 100 mile route and Micheal Hyde and Dan Biggs opted for the 50 miler.  CV’s Ultra legend Simon Bourne is familiar with the route having completed it successfully last year and finishing 8th overall. But this year he went up the leaderboard finishing 4th overall and 3rd male in 24:11:41. And if that wasn’t enough, his running buddy Kevin finished 3rd overall (2nd male) in an impressive 23:30:01. This was out of a field of over 400 runners. Said Simon:

‘Kevin and I both started the race steadily in around 20th place then moved through the field to finish 3rd and 4th respectively. We’re both delighted to have achieved our best ever result in the UK’s toughest single day race, which involves a 105 mile loop around the Lake District fells. . Weather conditions were challenging with hail, rain and strong winds which meant only 50% of the 420 competitors finished within the 40 hour time limit’ 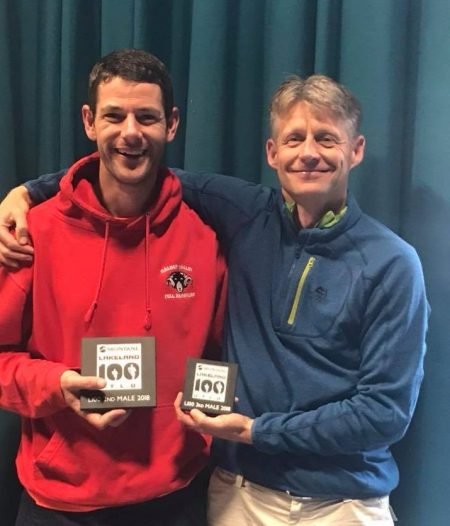 Earlier this week, Instead of the usual pack run last Tuesday, club members gathered by Overden windfarm in the blazing heat to  take part in the annual CVFR Summer handicap, keen to take on the challenge and the chance to experience that ‘winning sensation’, regardless of ability. The relentless heat had diminished the legendary waist deep bogs but the tussock ‘killing fields’ were still out in force. 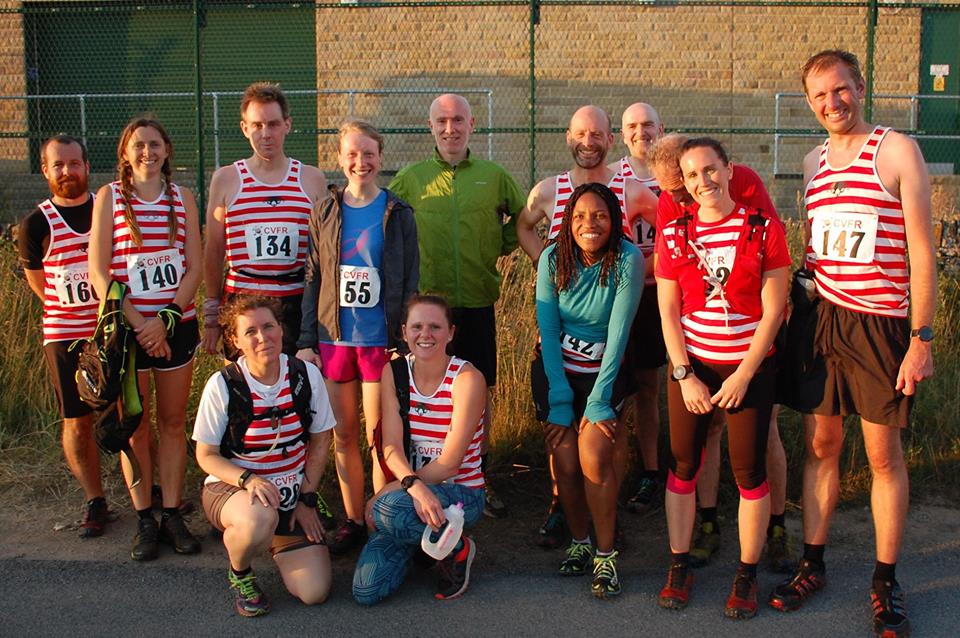 Rather than the usual mass start, the handicap race has staggered start times, with each runner allocated a starting time based on their performance in recent races. In theory, everyone should finish together but this is seldom the case with all runners putting in extra effort to beat their club mates. 42 determined CV runners, including 5 juniors, took part in the 6.6 mile route across the moor to High Brown Knoll and back, encountering difficult tussock terrain as they went. Ellie Eady was first over the finishing line. Said the ever modest Ellie: 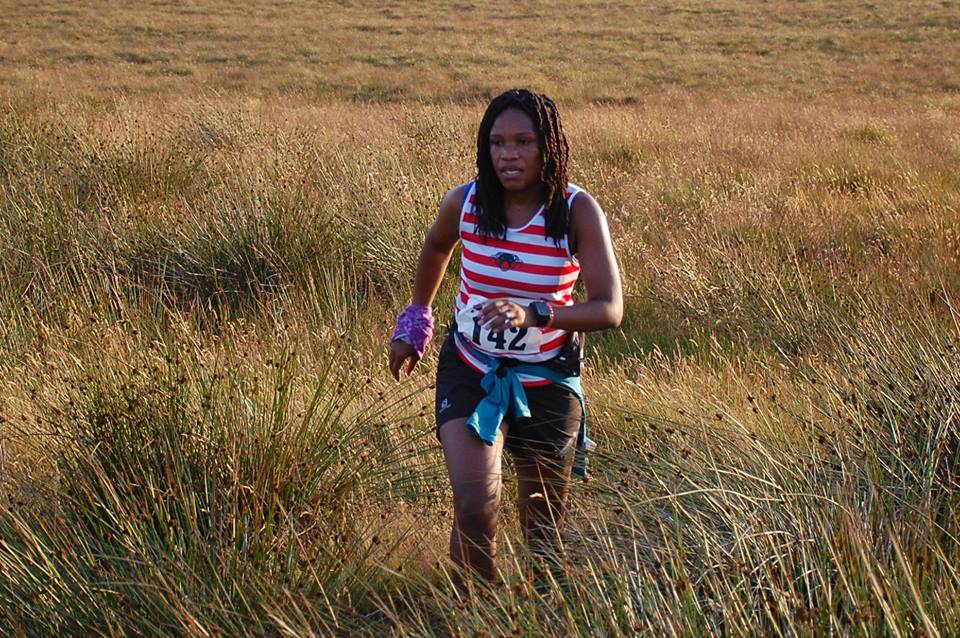 Ian Symington was the fastest runner (52:10) with club newbie Natasha Butterfield the fastest woman (59:51). Joe Hobbs was the speediest junior finishing in an impressive 59:08. 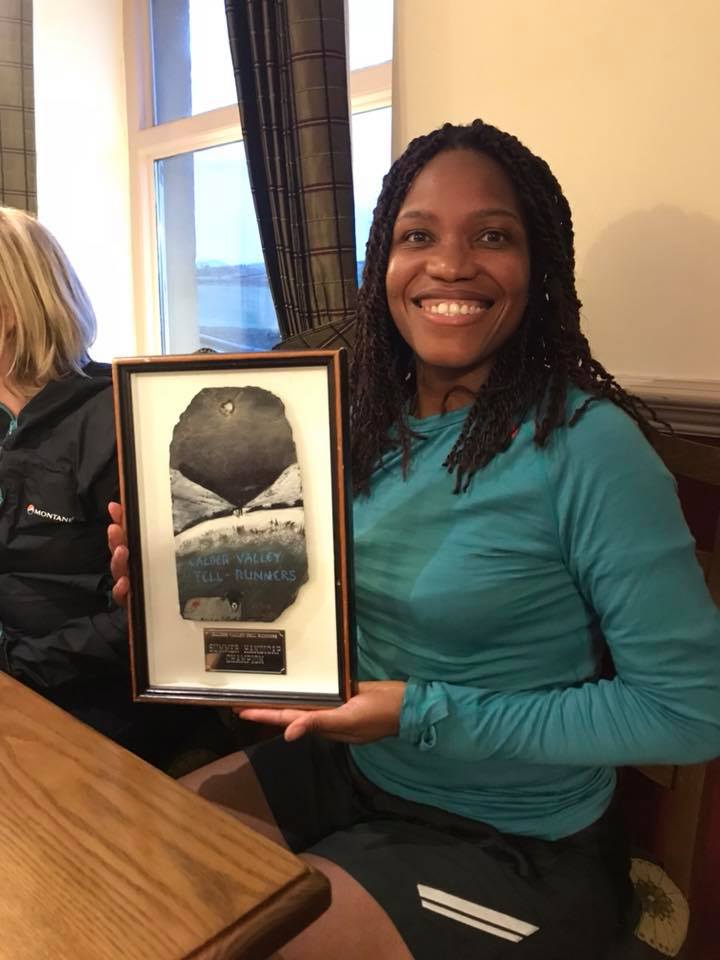 Runners at Saturday’s Turnslack race, this year in the club’s championships, experienced bizarre weather conditions and a very random prize haul. Renowned for it’s gruelling tussocks and fern bashing fun, the route goes from the hill from Calderbrook Church, Littleborough then off along the main path to Watergrove Reservoir, before branching off over the moor which leads to an up and down of Hades Hill. This is followed by a hard push on the long ridge to Trough Edge End with two tough climbs then approaching in quick succession.

This year, the race had hardly begun and then the heavens opened and the hail started in earnest. The racers retreated to find cover as what seemed like sniper fire attacked from above. Those hardy souls at the front continued with the winner going on to break the course record. Tim Ellis was 2nd with Gav Mulholland 1st v45 in 5th place. They were joined by Jonny Croston in 9th and Paul Haigh in 11th to win 1st male team. Catherine Holden  was 2nd woman home and claimed a prize of strawberries for her effort  whilst Steve Smithies got his Lambrini for being 2nd v50. CV’s prize haul ranged from toilet paper to wagon wheels and a pump rocket. 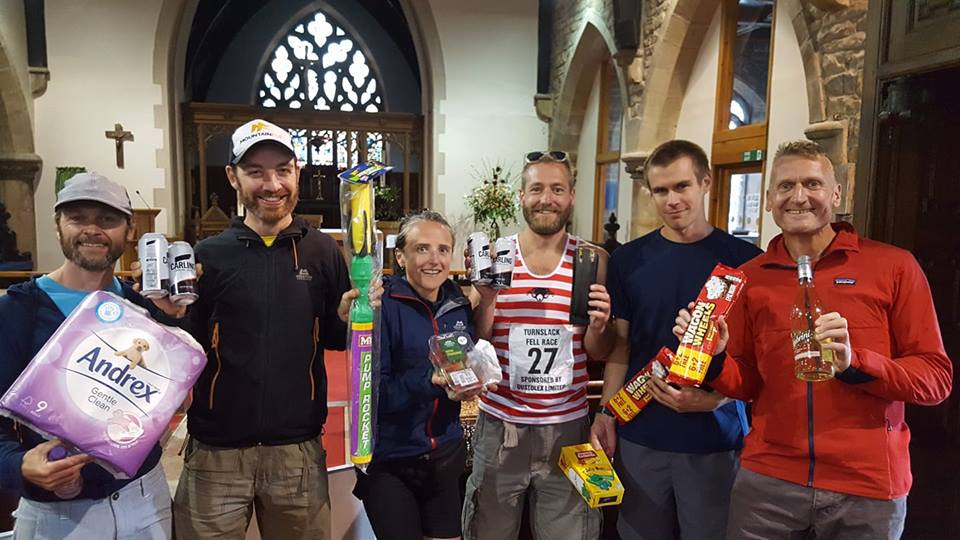 After limping to the start line, hampered by his ongoing battle with the dreaded plantar fasciitis, Mark O’Connor shot away through the town of Bourg-St-Pierre. Giddy as a kid in a candy store, he led the 150 strong field into the woods to begin the first climb, an energy sapping 4600ft to the Monastery at Valsorey. O’Connor was slowly reeled in by the relentless Jon Smith. Smith, worried about overheating was benefiting from the purchase of an extra large white running cap the night before the race. It worked, he extended his lead over O’Connor to 5 minutes before topping out.

Further down the field Ben Frechette, delighted with the way the Swiss were pronouncing his surname, was helping Iain Powell overcome some debilitating bouts of vertigo. As the climb went on the tables turned and it was Powell helping Frechette up the last scramble to the monastery, where they were met by marshalls drinking prosecco at 3000m.

Nathan Kennaugh, fitting in wonderfully with his European cousins had invested in some some racing poles. He used these with great effect in his battle with Richard Ingram, managing to get the better of Bert as they hauled their way up to the Monastery.

Back at the front of the race, the happiest man on the mountain, Mark O’Connor set about the first decent to the glacial valley of La Gouille. Using his massive quadricep muscles O’Connor narrowed the gap to his nemesis Jon Smith only to see Smith power away up the second climb to the checkpoint at the precipitous Petite Velan. A quick refuelling stop before re-tracing his steps and starting the long descent to the finish saw Smith and O’Connor passing each other in opposite directions. Exchanging customary insults whilst passing it became clear that the gap was large and O’Connor’s chance of being first CVFR home almost gone. Cramp just 2 miles from home put an end to his very slim chance. Smith finished an impressive 15th overall in 3hrs 41mins. O’Connor 20th in 3hrs 53mins.

Meanwhile Fresshay and Powell’s temporary alliance was over and hostilities were resumed. Feeling strong on the second climb it was Powell who pushed on to Petite Velan, reaching the checkpoint two minutes ahead. He turned for home and started the long switchback downhill section hoping to hold off the now marauding Fresshay who was gradually closing the gap. Powell’s lead was down to less than a minute when cramp hit. Fresshay, struggling to stifle a grin as he check on his comrade, now had the advantage. With his Frog Graham training in his legs he slowly eased further ahead of Powell. Fresshay finishing 43rd in 4hrs 20 mins and Powell 48th in 4hrs 23.

Kennaugh and Ingram were approaching Petite Velan, engrossed in their own tussle, as the weather turned. An Alpine thunderstorm moved in, the heavens opened, thunder and lightning crashed all around the CVFR pair and Kennaugh panicked. Realising his racing poles were the perfect lightning conductors he stopped to stow them in his racing pack and Ingram made his move. Nimbly moving from boulder to boulder Ingram’s lead grew. Both remaining CVFR team members finished soaked to the skin, Bert 73rd in 5hrs 8mins and Nathan 85th in 5hrs 25mins.

Many locals commented on how magnificent the lads looked in their red and white hoops, showing their continental compatriots how to run as a team. A night out in the French ski resort of Chamonix followed, of which there will be no written report.

Trail du Velan is fairly low key as European mountain races go but is exceptionally well organised, runners receive a huge amount of support and encouragement en route, it is extremely challenging, technical and even terrifying (for some) in parts. It comes highly recommended. 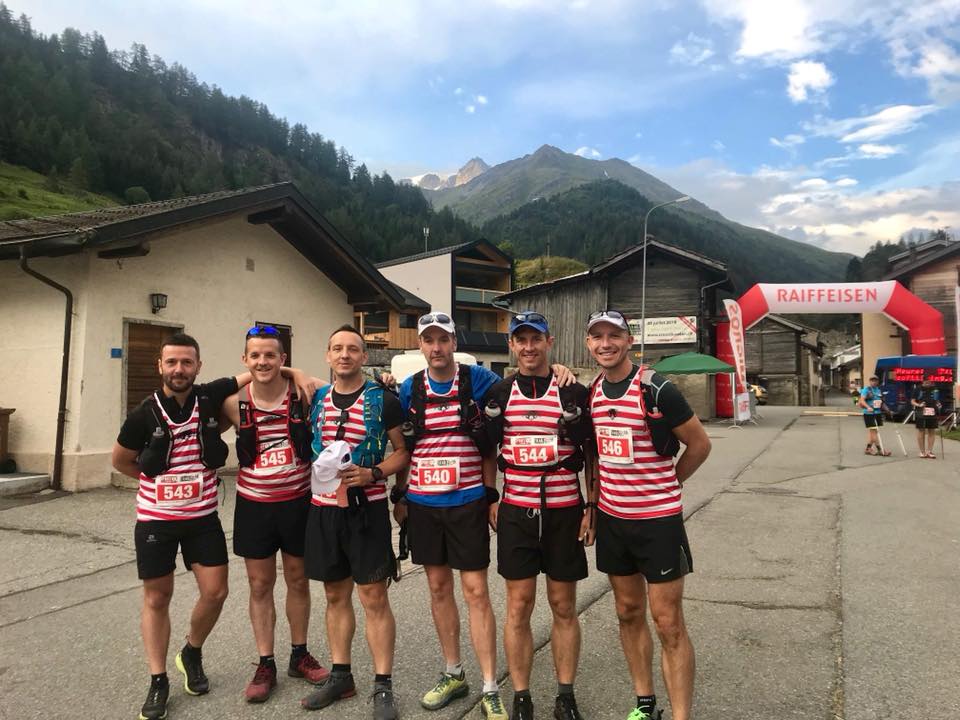 Switzerland gang getting ready at the Trail De Velan 2018