The Castle Carr Fell Race was a counter in this year’s English Fell Running Championship. Over 200 of the country’s best fell runners descended on the Hare and Hounds at Old Town where the race starts. Over 50 marshals helped out including some of the finest CVFR runners helping direct parking before doing their race.

The runners set off to the pulse-racing beats of the Hebden Bridge Samba Band then took in 15 miles of moorland, tussocks and faster tracks over and around Midgley and Warley Moors. The route includes running twice through the grounds of the Castle Carr estate, past the famous fountain and the ruins of the old hall. The private estate allowed access for the race thanks to the generosity of the farmers, the Scholefields. Thanks are due to all the local landowners for their helpfulness.

Sam Tosh (Rossendale) and Carl Bell (Keswick) are both vying for the men’s title and had a good tussle throughout the race. Carl pushed the pace on the flat and downhills, while Sam went ahead on the climbs, with Tosh ultimately victorious by just over a minute. They were in a leading group of 4 with Simon Bailey (Mercia) and newcomer John Spill (Pudsey and Bramley) for much of the race, but John dropped out injured around halfway, and Simon fell back before the final sections of the race. Sam and Carl both were under 2 hours, amazing speed over such tough terrain. Bell is currently leading the English Championship but if Sam can win at the final race of the season, Great Whernside in October, he could pip him at the post.

Calder Runners, Karl Gray and Gav Mulholland worked together for the first 3/4 of the race, then Karl surged ahead as the route crossed the Luddenden Dean valley. Carl was 8th in 2 hours 4 minutes 49 seconds and Gav was 13th in 2:08:02. Gav’s result will put him at the top of the V45 Championship, but Karl’s 1st in the V45 at Castle Carr will mean he could take the title if he does well at Great Whernside. 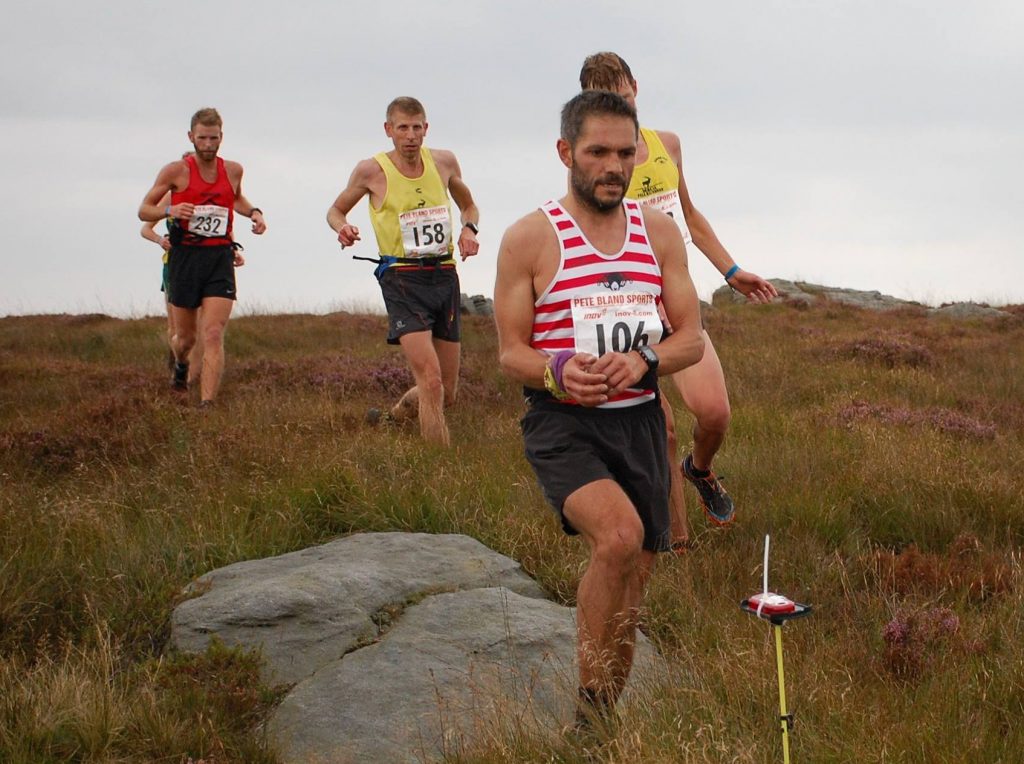 In the women’s race Victoria Wilkinson (Bingley) continued her winning streak and looks to be unbeatable in this year’s Championship. She has won it for the previous four years an must surely count as one of the all-time top fell runners. Having beaten the record at Kilnsey Crag earlier in the week, her time at Castle Carr was quicker than Ben Mounsey’s race-winning time last year. Under 23, Annie Roberts’ 3rd place amongst the women was superb. Helen Roberts was Calder Valley’s first woman back in 22nd place.

Many of Calder Valley’s runners who were marshalling at Castle Carr on Sunday, took the opportunity to race at the Blackshaw Head fete on Saturday. Taking in a rapid circuit of Heptonstall Moor and finishing with a steep uphill run into the fete field from Jack Bridge the 5.5 mile race was won by Callum Hanson of Pudsey and Bramley, shortly followed by Calder’s Shaun Godsman who was 1st V40. Backed up by Iain Illstone in 8th and Paul Haigh in 12th, Calder took the men’s team prize. Christina Turner was first woman back for Calder and second female V40 overall. 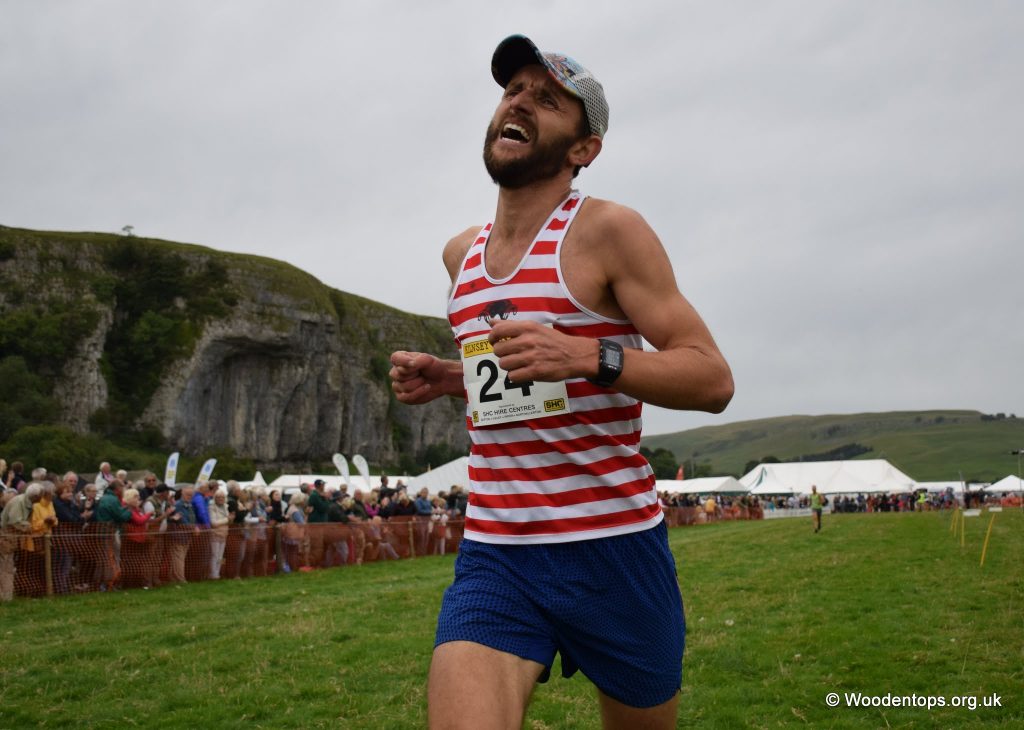 Some of Calder Valley’s fastest runners headed up to the Dales the Tuesday after the August Bank Holiday. The Kilnsey Crag Fell race is a traditional, short fast and steep race from the Kilnsey Show. It includes an infamous scree descent known as The Chimney. Math Roberts, Ben Mounsey and Darren Kay were 6th 7th and 9th respectively out of 110 runners, all under 9 minutes. William Hall was first in the under 12s race, with James Duffy 3rd and Patrick Casey 4th out of 34 runners. Fearne Hanson was 6th girl. 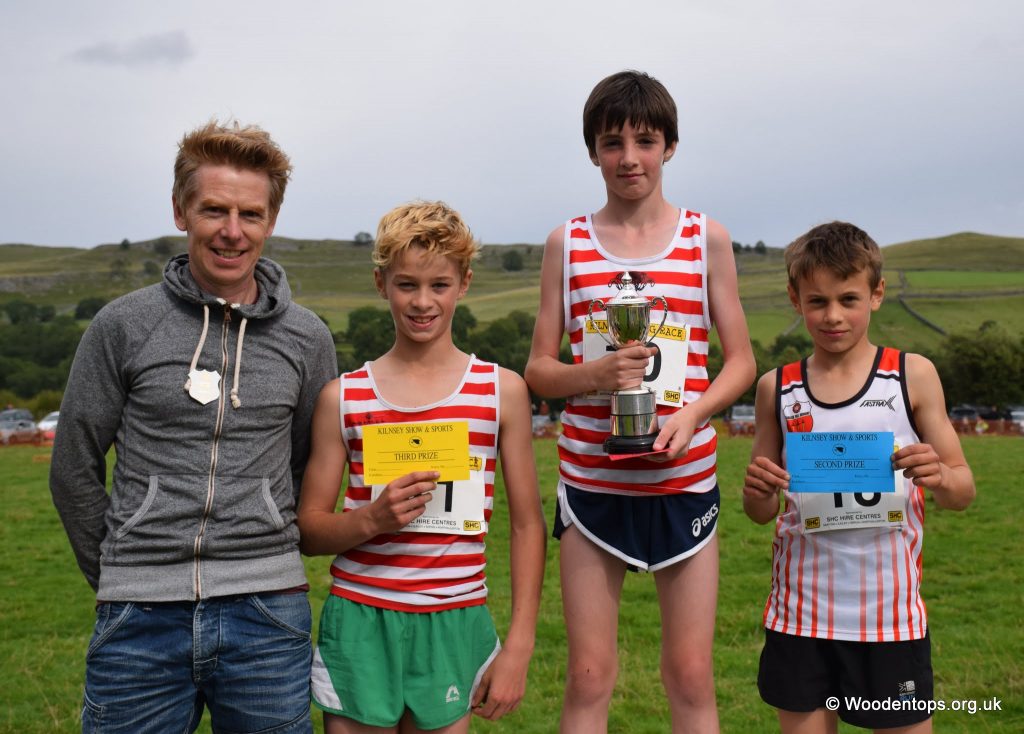 Will Hall and Patrick Casey at Kilnsey

Amazing results for Calder Valley Fell Runners out at the World Masters Mountain Running Championship in Pruske, Slovakia. Ben Mounsey was 5th in the V35 race, Jason Wilf Williams was 7th in the V40 and Mark Wharton was 20th in the V50. Last but by no means least, Max Wharton was 2nd in the open race.

A handful of Calder valley made the long journey to Fort Willam’s for the Ben Nevis race. Standing at 4400ft this is the UK’s largest mountain. A quick 4.5m straight up and then a zoom back down, however, this does include a mile run in on tarmac to the finish, which is known to catch out many jelly legged runners. A few impressive results saw Calvin Fergus PB and Jon Smith in fine form, ran a sub 2hr for his Nevis debut.