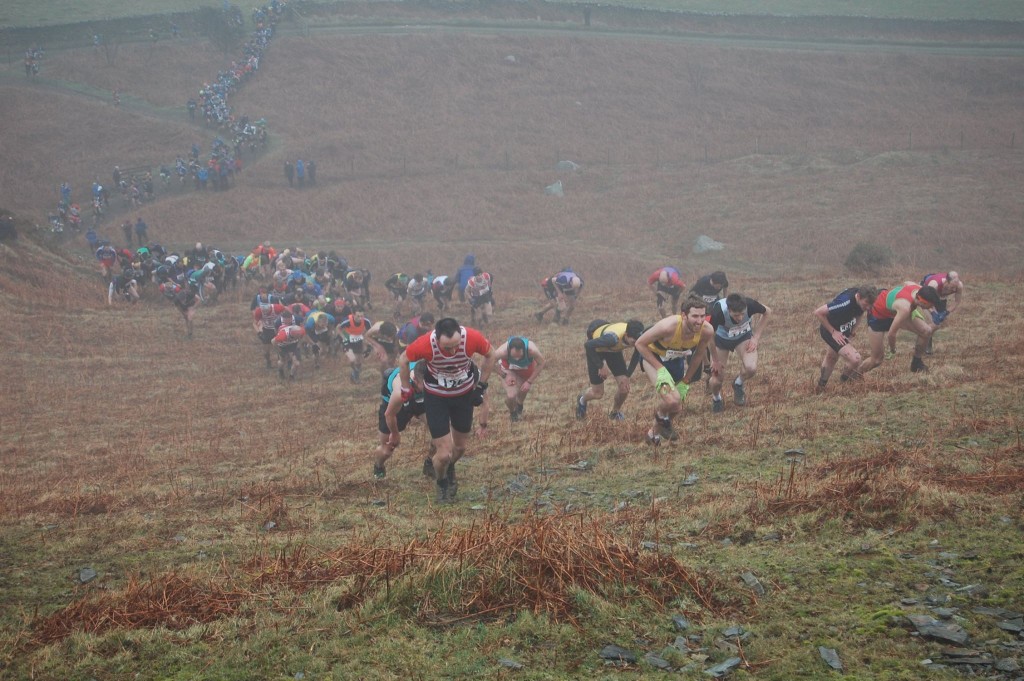 At the south western tip of the Lake District is Black Combe, a little climbed, 600 metre high hill. It was also the venue of the first race in the English Fell Running Championship for 2016.

The weather promised an eventful race as the clag was down with visibility less the 100m on the higher parts of the course. In the run up to the race the money was on Ben Mounsey to take the win.  He had reccied the route a couple of weeks earlier.  You can be as fast a runner as possible but if you don’t know the course inside out and the fog comes down, you’d better hope your navigation is up to the job. 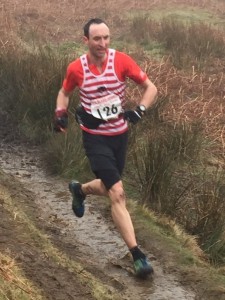 Ben went out hard and broke away early with Sam Tosh of Rossendale. They opened up a good lead at the top of Black Combe before taking a poor line off together on the way to White Combe. They re-joined the race in 4th and 5th behind Rhys Findlay-Robinson and Kris Jones of Dark Peak. Their calm heads and navigation saved the day. The four of them broke away as a group and worked together till the final climb when Ben used his leg strength, built up on reps of Trooper Lane, to pull away on the ascent. His final mile run in, with 1000ft descent, was clocked at 4 minutes 38 seconds.

Ben said “There was some serious pressure and weight of expectation on me before the race and I am absolutely chuffed to bits that I didn’t disappoint and managed to deliver the win! I can’t describe the feeling of winning at the end – unreal. Thanks to everyone for their support and kind words.  I’ve achieved a career dream of winning a Championship race against the very best competition in the country, and on unfamiliar Lakeland soil. This is a big deal. I now have a realistic chance of becoming English Champion 2016. Whether it will happen I don’t know but I’ll certainly give it my best shot!”

Gayle Sugden, Lucy Collins, Lindsey Oldfield, Jo Buckley and Rachael Crossland made a strong challenge in the team competition to pick up third women’s team prize. Captain Helen Buchan was disappointed not to be running, having recently picked up a neck injury. The women’s race was won by Victoria Wilkinson of Bingley in 33rd place.

Unfortunately some of Calder’s other runners were ‘navigationally challenged’. Karl Grey headed east in search of checkpoint 4 coming off White Combe, essentially ending his race.  Steve Smithies was really pleased to finish and see Karl along with Rob Hope and Simon Bailey come in behind him. 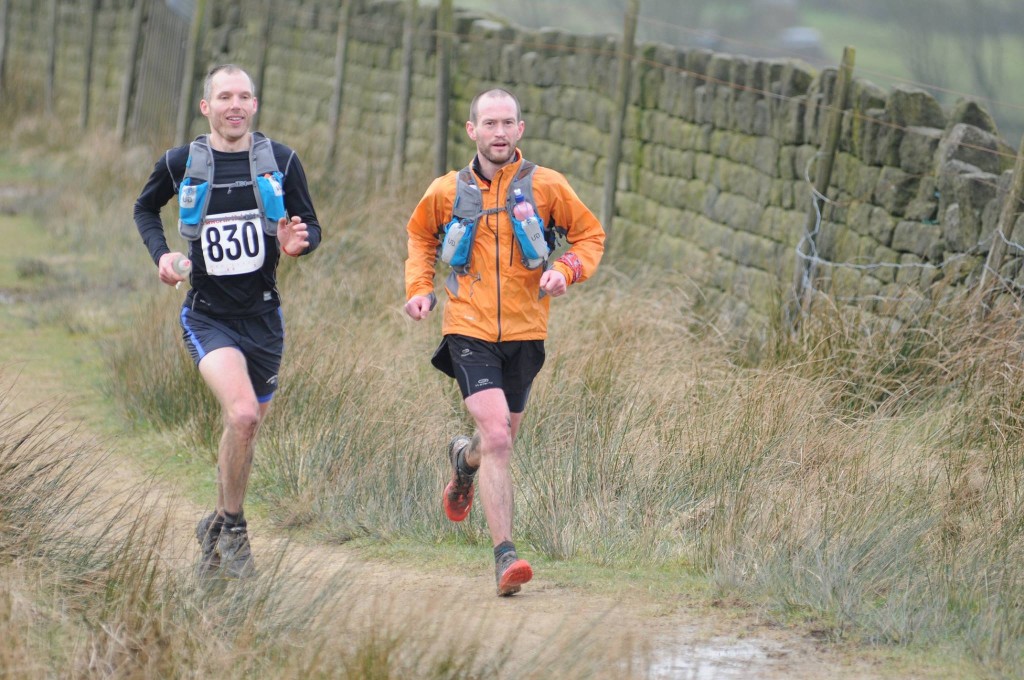 The Howarth Hobble is a 33m ultra distance race that is rightly a classic in the fell running calendar. Starting in Howarth the route heads over Top Withens, past Widdop to Lancashire before heading to Stoodley Pike and returning to Haworth via Heptonstall.

Calder Valley’s ultra experts, Ian Symington and Kevin Hoult stamped their mark on the race, gaining 1st and 2nd places respectively.  Ian, the reigning Runfurther Ultra champion, ran with Ken Sutor who will surely be challenging Ian for his crown this year.  They came home in 4 hours 16 minutes. 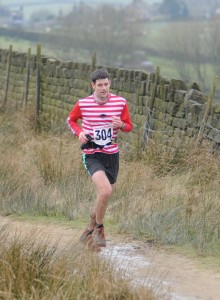 Kevin Hoult at the Howarth Hobble

Ken and Ian had decided to run together towards the end of 2015. They are in the 2016 Goretex Transalpine running as a team and needed to check their compatibility. During the Trog in February,  they ended up racing together and were pretty much step for step the whole way until Ken broke free on the final climb over the muddy fields.  Ken has been Ian’s regular Ultra rival for the past two years.

Ian said “He always starts faster than me so it is quite a nerve wracking experience waiting until about the 30 mile mark to see if I’ve paced it better than him. I’m convinced he is a better runner, he just runs Ultras like a greyhound out of the trap”

“I think we may have been a bit faster if we were racing each other. I made Ken run conservatively and I thought the biggest threat was from Kevin Hoult storming through at the end if we faded. With Kevin in mind I just knew we had to keep going at a reasonable pace on the 2nd half and we would be OK.

“We whittled it down to a pack of three on the climb out of Widdop and were on our own as we dropped down into Tod.  We took it really easy going up the pike but none seemed to close in so I was fairly confident we had it.

“I like the Hobble but I always get cramp on it. It is the amount of fast runnable climbs that do it. I felt the twinges as I was passing Tod golf course then had it fully lock out coming off the pike. I’ve had this often enough to know you keep going it can go away (don’t stop and try and stretch it out, keep running). I stamped it out on the way down into Hebden and it wasn’t so bad for the rest of the run home.”

Simon Bourne made a pleasing return to racing after a calf injury side-lined him earlier in the year. Starting off in about 30th place at the first checkpoint he worked his way thought the field to finish 8th overall.  The women’s race was won by Lucy Colquhoun in 5hrs 10mins.  John Minta, not content with the 33 mile Hobble on Saturday also completed the 16 mile Edale Skyline race in the Peak District on Sunday.