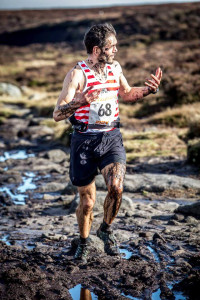 Calder Valley’s Karl Gray got into the Halloween spirit, emerging from the bogs like a grotesque creature of the night to win in the Peak district at the weekend. Gray not only seized a mud splattered victory, but also set a new course record.  He was one of small group of Calder Valley runners to head down to Langsett for the “Grin and Bear It” Fell Race. 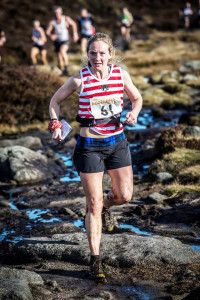 The event was organised and marshalled by Woodhead Mountain Rescue. The gruelling 16 mile race takes in 2000 feet of climbing  over a mix of rocky paths and open exposed peat fell.  One hundred and twenty six runners set off from Langsett Barn. They headed through Langsett woods onto the first and toughest climb of the race, scaling a rocky path onto the Peak District summits. They then progressed across Hingcliff Common, parallel with Mickleden Beck, along Mickleden Edge, Cut Gate, and onto a series of exposed edges.  The race then turned onto Featherbed Moss over the first section of open moor, full of treacherous bogs and energy-sapping tussocks, presumably the inspiration for the portentous “Grin and Bear It” moniker.   Valley’s Gray led a strong break-away group, including the formidable Tom Brunt of local club Dark Peak, Chris Arthur of Bowland, and Andy Swift of Penistone, as the race reached the trig  point at Outer Edge.  Gray skillfully navigated his way over to a check point at Cat Clough, but must have had a sinking feeling as the moors added the race leader to a host of victims sucked into its boggy depths. Undeterred Valley’s “Earl Gray” extricated himself from the mire to head up to the small stone cairn at Loftshaw Clough Head. He then passed the ‘1894’ stone, to the checkpoint at Swains Head, and onto the checkpoints at  Salter’s Brook Bridge, and Cabin Hill. The leading group were still together as the race reached its nail-biting conclusion. Taking control, Gray upped the pace past Wicken Hill and Upper Hordron Barn, and held off a host of rivals on a sprint finish through Langsett woods. He steamed home in a record breaking 2:01:32. Gray was just 10 seconds ahead of Arthur, and a full minute ahead of third placed Brunt (2:02:31). Valley’s leading lady was the in-form Helen Buchan, who turned in an impressive 2:56:34 to take a top half finish in 58 place. Team mate Helen Lambert was 101st in 03:31:50.

Calder Valley took the men’s team prize and Todmorden Harriers the ladies team prize at Saturday’s historic Race You To The Summit contest.

The 4.3 mile contest, with 831 feet of ascent, is from the Summit Inn at Littleborough to the White Horse pub at Blackstone Edge. Organised by Allan Greenwood and sponsored by Running Bear, next year’s 50th running could be the last because Greenwood is retiring.

The race came into being after a mill worker wagered that he could run to the White House, touch the wall and return within half an hour.  He reputedly won the bet so must have been quicker than this year’s winner Joshua Boyle, who clocked 30.06. The diminutive Blackburn runner, racing for Scottish club Cambuslang Harriers, beat ex- Calder Valley member Joe Crossfield, now of Halifax Harriers, by 31 seconds. Valley’s Lindsey Oldfield was second female finisher (37.07) behind Glossopdale’s Caitlyn Rice (34.26), who was completing a hat-trick of wins. Calder’s winning team was led home by Jon Smith in fifth (32.37), Richard Sunderland in 11th (34.11) and Mark O’Connor in 12th (34.16). Valley junior Martin Howard was 17th (35.30). The race was in Calder Valley’s club championship, meaning a healthy field of 101.