In the world of fell running it really doesn’t get much better than the adrenalin inducing Langdale Horseshoe.

Taking in a high level circuit of this sublime Lakeland valley the race is a true classic in the fell running calendar. A healthy contingent of Calder Valley thrill seekers were among the 400 runners lined up at the foot of the fells with legendary organiser, Roger Bell, starting the race for the last time, to a warm round of applause from his grateful customers. It was then onwards and upwards to the mouth-watering beauty of Landgdale’s summits and tarns. With a cumulative ascent of around 4,700ft, the race starts from the Old Dungeon Ghyll Hotel, taking in Stickle Tarn, Pavey Ark, Thunacar Knott, before a glorious descent over the deeply squelchy Martcrag Moor (the closest the race gets to the terrain in Calder Valley’s home terrain) ahead of a steep ascent to Esk Hause. 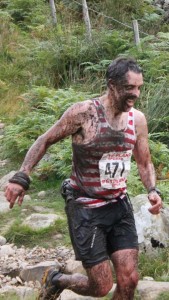 A truly horrific traverse under Esk Pike follows, leading to Ore Gap and the climb up to the Bowfell summit, the highest point on the course at around 2,959ft. Things get distinctly tricky on the rocky descent to Crinkle Crags and the infamous “Bad Step”. Runners briefly become climbers as they cling to a sheer rock face that bars the exit from the rocky summit. There follows a break-neck descent to the foot of Pike o’ Blisco and the last ascent to Blisco’s shattered, boulder-field, peak. The grand finale is a 2000 feet, helter-skelter grassy descent, all the way to the finish in Langdale. Cruising to well-earned pint, Valley’s Mark Wharton was forced to turn the throttle up as he noticed his team mate Tim Brooks looming in his rear view mirror. Throwing caution to the wind Wharton ran head long into the deepest bog on the 13 mile route, losing his footing he slid face-forward through the quagmire, emerging to complete the race just ahead of Brooks, in a mud-splattered scene reminiscent of a zombie B movie. Meanwhile Valley’s Charlotte Whetton was so captivated by the staggering beauty of the Langdales that she decided to take in the neighboring valleys, veering off the race route from Pike of Blisco she dropped into Little Langdale and Blea Tarn, before eventually making it back to the pub well before nightfall, to the relief of her worried team mates. At the front of the field Valley were noticeably absent, with the A team runners saving themselves for other races. First home was Sam Tosh of Rossendale in 2 hours 11 minutes followed within 14 secs by Morgan Donnelly of Borrowdale, and Andy Fallas of Carnethy. Jasmin Paris from Carnethy was first lady in 2 hours 26mins in 24th place only 3 mins outside the ladies record. 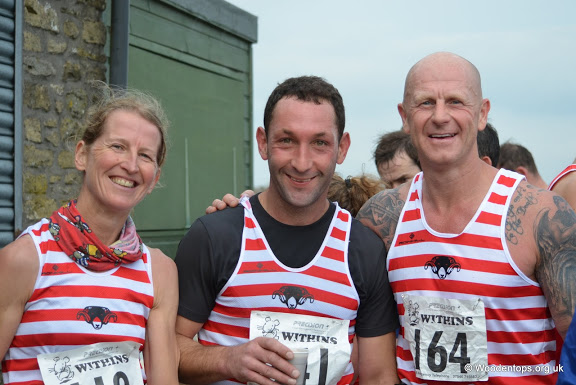 Anne Johnson was Calder Valley FR’s star performer in the Withins Skyline Fell Race. She was one of six runners to break senior records in Sunday’s 24th running of the seven mile event, winning the female veteran 50s in a time of 53.03.

The race reflected all the hard work of David and Eileen Woodhead, organisers of the hugely popular fell races from Penistone Hill in Haworth, who have just received their well-deserved MBEs. Junior and senior runners revelled in the fine conditions and Johnson came 84th in a field of 315 senior runners, clocking 53.06. She was closely followed by Lindsey Oldfield who was only 6 seconds adrift. Not bad considering she had a weekend of celebrations following her birthday. Making a comeback from injury Gillian Wisbey had a good run to finish strongly in just over 62 minutes. Calder’s new club champion Jon Smith led the way in 12th (45.17) 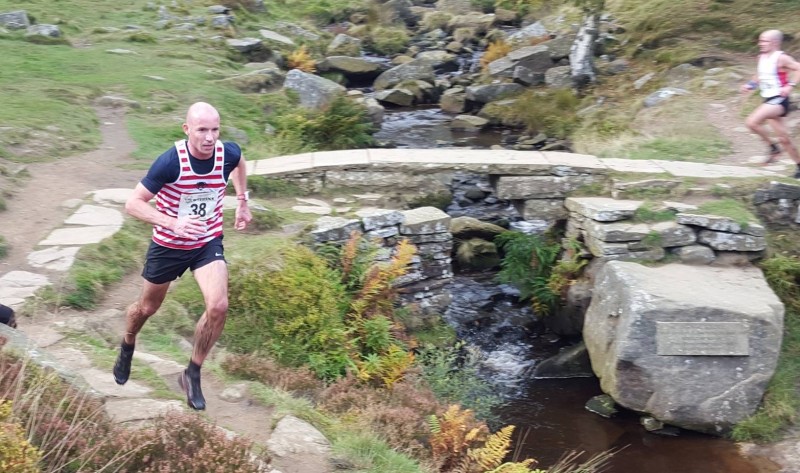 John Smith on form at Withens

clubmate Tristan Sheard 34th (48.04) and Jake Ackroyd 78th (52.56). John Minta had a very busy weekend doing the double with Langdale on the Saturday and Withins on Sunday finishing in just over 55 minutes.