Jason and Alex Kick off the IH Relay

“You lot are bloody useless. You can get 8 runners in the top 10 of the English Champs and we usually have 1. You’ve been beaten by a bunch of old men”.

After a season of such collective and individual highs, the sporting Gods brought Calder Valley back down to earth at Sunday’s Ian Hodgson Mountain Relay (IHMR) in the Lake District. The toughest relay in the country is reserved for elite runners only and has famously been won by local club Borrowdale every year for about as long as anyone can remember.

After an agonising second place last year, Calder’s elite man were determined, and not lacking in confidence, that this was the year to topple the mighty Borrowdale in their own back yard. However, it was not to be, and even worse, with a large dollop of hubris, they were beaten into third place by Keswick AC, another set of Lakeland aces.

To win the IHMR you need to be consistently good over all 4 legs. You can’t afford to make mistakes, you can’t afford to be ill and you can’t afford to get lost in the mist. Everything needs to go well, your runners have to be well matched and you need to have the right pairs on the right legs. Borrowdale are rarely the fastest team on paper but they’re by far the smartest club and they know how to win. They don’t make mistakes. You have to admire and respect them, it’s as simple as that. More importantly you have to respect the race. It’s the toughest relay in the country for a very good reason taking in the bulk of Lakeland’s famous peaks. 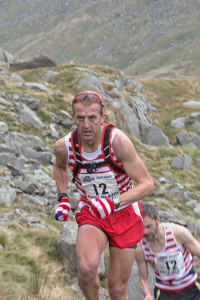 Darren and Gavin pairing up at the IH relay

Calder’s GB international Ben Mounsey picks up the story. “In truth we were always going to be chasing the race after leg 1. Jason Williams paid the price for racing the road relays the day before and we then had nearly a minute to make up on the first pair. Tim Ellis had also been struggling with a cold for the last couple of weeks and unfortunately he and Math Roberts finished leg 2 a few minutes down on the top 3 teams, Dark Peak, Borrowdale and Keswick. In stepped fashion icon Daz Kay to save the day with Gav Mulholland on leg 3 and they managed to claw back some time on the front lads to set up a titanic battle on leg 4.”

The excellent Davies brothers set off 1st for Borrowdale knowing that they would have to run an excellent leg to protect the 3 minute or so lead they had after the changeover. Next went Dark Peak with Neil Northrop and Dave Taylor, before Calder set off in tandem with Carl Bell and Steve Hebblethwaite for Keswick. Ben led out the chase to the first checkpoint and set a very quick pace. It was clear from the start it was going to be a ‘sufferfest’ as Ben and newly crowned World V45 Mountain Running Champ Karl Gray raced hard and attacked the climb, looking to claw back some time on the other teams. Interestingly all four of the top teams took a different route to Hart Crag and when Calder reached the summit Keswick had appeared to run the better line, or just ran faster, Karl worked his socks off on the ascent but was visibly spent and by this point Calder had already lost too much time to Keswick and realistically were running for third place.

Much to learn then for Calder’s star studded team, and a hugely satisfying win for the invincible purple of Borrowdale, who struggled to contain their smugness. 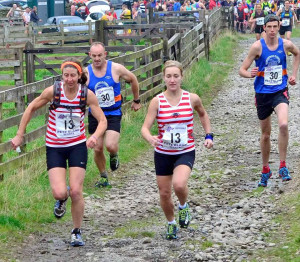 IH Relay and Lucy and Jo team up

And to the ladies who made history for Calder Valley by being the first female team from the club to do this prestigious relay. Lindsey Oldfield and Anne Johnson had a blistering 1st leg to place 2nd ladies team at the change over at Hartsop. They handed the baton to Jo Buckley and Lucy Collins and they were still in the mix sitting in 3rd ladies team as the passed onto club Captain Helen Buchan and new signing Molly Heitz. These 2 ran a good solid leg in the mist and as Gayle Sugden and Sally Newman took the reigns it was a hard task to try and claw back enough time to get on the podium. They had a fantastic run and only missed out 3rd place by a couple of minutes. Given that the winner Ambleside and 3rd place team Keswick who Calder were chasing down live in the Lakes and know these hills like the back of their hands the girls can be very proud of a great result and it was so so close …. Perhaps not wearing number 13 will help next year!!! 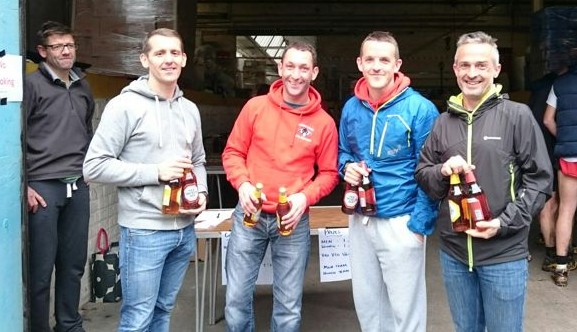 It was thick clag on the edges at saddleworth which didn’t discourage the 16 calder valley runners including the flying Dan Biggs AKA The Biggenaught  who is continuing to play havoc with Bills ratings each race.  There was plenty of good individual performances notably Richard Sunderland, Jake Ackroyd and John Killerby who raced there way into the Ale prize giving and took the CVFR men’s team prize.