In a season full of achievement for Calder Valley fell runners, they can now boast a bona fide World Champion among their ranks. Brighouse’s Karl Gray, for many years the club’s leading light, claimed the crown last weekend at the World Mountain Running Championships in Betys –y Coed in Snowdonia.

Gray, widely regarded as one of the country’s leading all round fell runners, being expert over multiple distances, showed that even at the ripe old age of 46, he is still a runner of fabulous ability. This he demonstrated fully over the demanding six mile route.

Gray said “It feels amazing being a world champion. I’d had an eye on this race for most of the year and started to do shorter, intense training sessions through the summer to prepare me for the fast six mile course. I’m much more suited to races over 15 miles now and usually only start getting warmed up at the six mile mark.”

Pre-race, Karl’s ambition was to be among the medals, but was wary of the strong field and knew he had a job on his hands. “I felt great and led the field up the first climb,” he said.

“Near the top, and as the terrain started to level out, Salford Harriers’ former British and English international mountain runner, Martin Cox, took up the running and pushed the pace.  I noticed that we were away on our own at this point and I was on my limit following him. I hung in there and managed to open up a gap on the descent, and with the recent overnight rain making for a wet course, this suited my fell running style especially on the descents and tight twisty terrain. I managed to maintain this gap on the very tough second climb and opened it up a bit more on the descent into the finish, allowing me time to saver the moment during the last 100 metres to the line.” 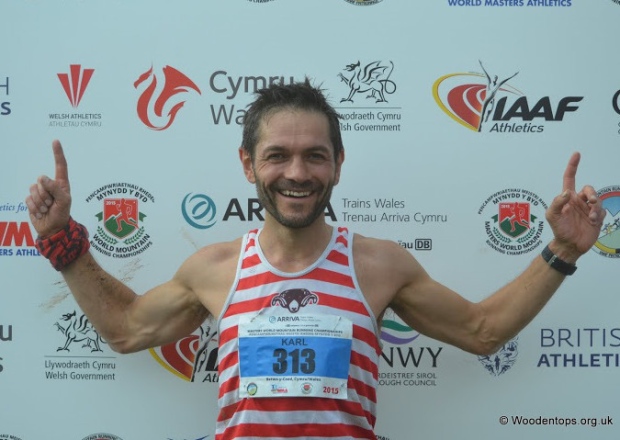 Karl, who has had to live with star team mate Ben Mounsey hogging the headlines of late, was understandably thrilled with his success. “This is without doubt the proudest achievement so far.”  Gray said it had been a great year so far for himself and Calder Valley Fell Runners.

“The club has won both the men’s English and British open and veteran 40 fell titles. The female v40 team has secured an English bronze and I’m the 2015 vet 45 joint English champion.  “The amazing team spirit has kept me focused and motivated all year.”