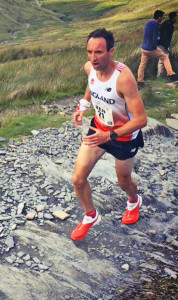 Building on his brilliant 3rd place at the recent Snowdon Mountain race, Calder Valley’s Ben Mounsey was yet again to the fore at last weekend’s Home International race at delightful Betws-y-coed in North Wales. His ripping run at Snowdon had cemented his England credentials and Saturday’s race saw him pitted against the best fell and mountain runners the UK can muster.

Perhaps it was the red and white of his new England vest that reminded Ben of his beloved Calder Valley, fell running’s original red and white hoopsters, but Ben was more than at home alongside the great and the good of today’s elite. One can either be daunted or inspired by such company, and adrenalin, nerves and self-doubt can wreak havoc in even the most able athlete’s mind. But Ben, fortified physically by his now legendary 500km training months, a record of number one spots that would do One Direction proud, and of course, that confidence boosting 3rd place at Snowdon, showed why he is now the real deal and feared across the land.

The stakes were even higher with places ultimately up for grabs to be picked for team GB and a chance to run alongside runners of near Olympic calibre. Ben, understandably nervous before the race explained, “I’m not going to lie, when I saw the line-up for the Home International (which was also the 3rd counter in the UK Mountain Running Championship AND the World GB Trial) I honestly thought I was aiming for a top 15 at best. The field was seriously stacked with the very best mountain runners in GB, Ricky Lightfoot (serial 3 Peaks winner) the only absentee. It’s the strongest field I’ve ever raced against in my 10 years of competing. However If anything I do thrive on the competition and I was well up for this one. The only thing I wasn’t happy about was the course- seriously fast, runnable and not technical at all which really suited the roadies who flirt with mountain running.”

Ben’s usual trick of firing off from the gun has worn somewhat thin in recent months in local fell races. He is a one man winning machine and has struggled to find any takers to go with him. Races are over within a 100m or so. However, among a field as good as this, they all play this card so the start is akin to an F1 grid, where its right foot down for the first corner and we’ll see who blinks first.

The race was based on three laps of a specific course. Ben had to gird his loins and swallow hard to keep tabs with the leaders on lap one as a fearful pace ensued. Ben picks up the story once again, “The positions changed after every lap, all except 6th which I was never prepared to give up. The 3rd and final lap nearly broke me, I’ve never destroyed myself as much to protect a position in a race. With England International Chris Steele breathing down my neck on the final descent I throw myself down the track and gave it everything I had left to hang on for 6th. We also won the team beating Scotland to first place. I still can’t believe I’ve managed to do it, especially on a course which really didn’t suit.” To put the result in perspective Simon Bailey was 10th, Rob Hope was 12th and Lloyd Taggart 24th – all three recent British Champions. The race was won by Scot, Robbie Simpson, a seriously good athlete who will spearhead the GB team, a team that will now include Ben whose astonishing 6th place has done the trick and assured him of a team GB vest.