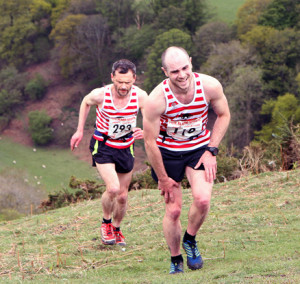 A large contingent of Calder Valley Fell Runners ventured south to the Shropshire hills for Saturday’s much anticipated Stretton Six Summits Fell Race. The picturesque market town of Church Stretton hosted the 2nd race in the 2015 English Fell Running Championships. Organised by Mercia Fell Runners the 6.3 mile route climbs 3200 “grassy”  feet to the six summits, showing little in the way of mercy to those who dare to rise to this “Category A” graded challenge. Calder Valley’s championship hopefuls included the likes of Ben Mounsey, Karl Gray, Tim Ellis, Gavin Mullholland, Darren Kay, and Jason Williams, all seeking to build on recent victories at races up and down the UK, but perhaps lacking the advantage of local knowledge over unfamiliar terrain. The severity of the course was best illustrated by the £200 incentive on offer to any runners able to finish in under 60 minutes; by way of comparison, if it were run on the level, the Calder guys could get round a similar distance in around 30 minutes if they ever had the inclination. 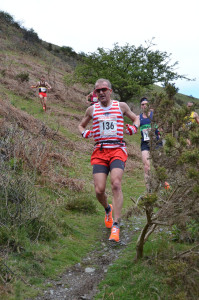 As the race set off in near perfect conditions, Mounsey quickly jumped to the front of the 310 field, and tucked in behind Mercia elite runner, Simon Bailey hoping Bailey’s local knowledge might help avoid any embarrassing navigational errors. After recent unplanned race detours Mounsey wasn’t going to build a lead and risk getting lost. Tim Ellis tucked in just behind Mounsey and together with Pudsey and Bramley’s Rob Hope, Borrowdale’s Morgan Donnelly and Bingley’s Rob Jebb it was a pack of 7 of who set the pace for the first couple of miles. Unfortunately despite some excellent climbing, the Calder pair began to lose ground on their elite opponents. Mounsey and Elllis clung onto the back of the group for a while before Ben started to suffer with a hamstring problem  picked up after last week’s Cake Race victory. The repeated ascents of the 6 Summits then began to take their toll. On the next big climb Mounsey’s race was effectively over, forced to watch in frustration as a host of rivals breezed past, including club mates Mullholland and Gray who now took up the mantel in Calder Valley’s bid, closing in on the front runners, and catching up with Tim Ellis on the last climb. And so it was that this formidable trio raced together to the finish line, like a well drilled cycling team with Mulholland taking the honours in 9th place (1:01:04), Ellis 10th (1:01:28) and Gray 11th (1:02:20) in an impressive demonstration of Calder Valley’s strength in depth, hinting at what might have been had Mounsey and Gray been fully fit. Mounsey eventually finished in 19th (1:04:32) with Darren Kay 21st (1:04:41) securing a prestigious Calder Valley men’s team victory. With Jason Williams having another a storming run in 26th (1:05:32) the  veterans also secured 1st team place. Tom Addison was first back in 59:01, followed by Rob Hope, Morgan Donnelly, Simon Bailey and Rob Jebb all under the hour. The club reigning champion Mark O’Connor showed fine form finishing 64th in 1:11:30. 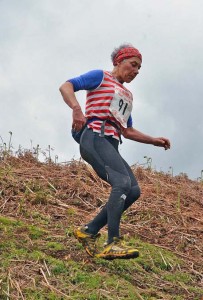 Sally as she descends the final hill