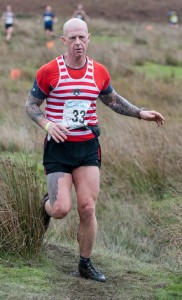 John on his double up racing weekend

With long summer days now behind us fell races are now limited to the weekend and in this season of ‘mists and mellow fruitfulness’ last weekend saw two races dominate the fell racing calendar.  First off was Saturday’s Langdale Horseshoe Fell Race, a true test of Lakeland mountain craft amidst the spectacular scenery that inspired Wordsworth and Coleridge. Checkpoints in this half marathon distance race include the Langdale peaks of Bowfell and Crinkle Crags and the splendid isolation of Pike O’Blisco.  Reaching them all requires over 4000 feet of climbing and descending, including the infamous down-climb of the ‘bad step’ if your route choice takes you that way. It was Dark Peak’s Rhys Findlay-Robinson who continued with his most successful year of racing yet to win outright in a time of 2 hours 16 minutes and just 1 second in front of fast finishing George Crayston of Borrowdale. Crayston will be one to watch next year and he is renowned for his audacious descending, finishing the race with typical bravura and blood flowing from one of his knees.  In fact, it was quite a busy day for the local hospital as runners returned battered and bruised from their epic encounters with the poetic landscape’s rugged features. Wily Jim Davies, also of Borrowdale, finished intact and in third. Calder’s ace navigator James Logue used all his skills in the low cloud to find himself in 1st place at Bowfell. He finally finished in a fantastic 5th position in what was a very strong field.  In the Women’s race it was a much more elegant although no less determined finish from Judith Jepson, making it a double victory for the Peak District’s premier fell running club.  For Calder Valley Steve Smithies (who didn’t get lost), Rod Sutcliffe, John Minta, Mike Wardle, John Nunn, Tony Steward all ran well in this beguiling landscape. 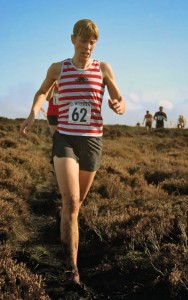 Sunday saw the staging of the Withins Skyline fell race in the bleak, withering Bronte moorland.  The race sets out from Penistone Hill Country Park and visits Withins Ruin, the alleged inspiration for Emily Bronte’s classic Wuthering Heights.  Simon Bailey was the day’s Heathcliff; Mercia’s main man once again putting in a heroic performance to win the race by a comfortable three minute margin from Wharfedale veteran Nicholas Charlesworth.

In the women’s race Lindsay Brindle continues to show race-on-race improvement, the Horwich lass running two minutes clear of Belper’s Rachel Chambers. Haworth and its surrounding moorland are made famous by the literary sisters of Anne, Emily and Charlotte Bronte, and it was a triumvirate of local ladies that dominated the team contest.  First Calder lady was Gayle Sugden who is in the form of her life as she notched up a third placed finish and a notable victory over club mate Jo Buckley, who finished fifth.  For the club to be successful in both championships as well as at the forthcoming national relays it needs strength in depth and the signing of Lindsey Oldfield is a coup for the Calder club as she continues to finish well up the field in her first year of running for Calderdale’s finest. Lindsey was not far too adrift of Jo Buckley, coming home in eighth place.

Graham Hill ran a fine race to finish just in front of Gayle, although he was just beaten by local V50 rival Dave Collins of Todmorden. Carl Coughlan has had a good year for Calder Valley and he was perilously close to claiming bragging rights over club colleague Ben Frechette. Richard Sunderland and John Killerby were neck and neck all the way to the finish line with just the mud on the front of his vest separating the veteran man from his younger club mate.  And to make sure his legs would work for 2 days on the up and coming OMM John Minta raced here after the tough Langdale Horseshoe the day before. He said his legs felt a little bit heavy but he still ran well. On what proved to be a glorious day in the Yorkshire countryside, winter clothing was definitely not required, but there were a couple of Scarfs in evidence as ace orienteering couple Phil and Jackie took to the hills, although their route finding skills were not tested on this oversubscribed autumn event.