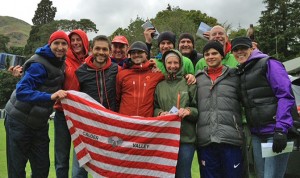 Calder Valley’s elite runners put in a brilliant performance at the weekend’s Ian Hodgson Mountain relay held out of Patterdale in the Lake District. The event, held in memory of Ian Hodgson, an elite fell runner who was tragically killed in a cycling accident in 1985, the day after he’d won the illustrious Karrimor Mountain marathon.

As such, the event presents a particularly stern test of fell and mountain craft, in a team relay format, and is widely regarded as one the plumb fixtures on the fell calendar. It has been a goal of Calder Valley for some time to excel at this event and break the hegemony of some of the larger, more established clubs. The race unfolded into a spellbinding duel between Calder and local giants Borrowdale. Borrowdale, blessed with some of the country’s finest runners and the huge advantage of local knowledge, were not going be budged off their perch without a fight. 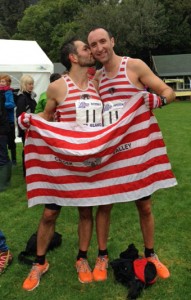 g run by Alex Whittem and young Max Wharton saw them tie with Chris Steele and Ben Bardsley, steaming over the handover point neck and neck at breakneck speed. Captain Shaun Godsman and new arrival Darren Kay kept the hammer down to stay in contention in second place then Tim Ellis and James Logue carded an excellent navigation leg, made especially tough by the heavy mist that had come down. Going into the final leg, star pairing of Karl Gray and Ben Mounsey ran the leg of their lives to post the fastest time of the day, but were unable to haul in Borrowdale’s old hands, Jim and Phil Davies.

In the mixed event, it was second place again for the crack team of red and white. Special mention must go to lead off pair, the femme fatales of Gayle Sugden and Jo Buckley who were comfortably fastest ladies. 29th place overall and second place mixed team is a superb result. 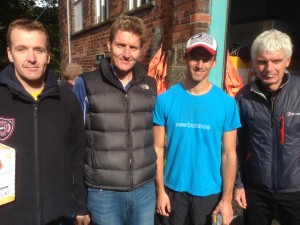 More mundane proceedings took place closer to home at the Saddleworth Edges race, an 8 miler run out of Greenfield. A fabulous race and route organised by Saddleworth Runners, it was Calder Valley exile Andy Fleet who took the honours with an excellent run. The diminutive speedster held off a valiant challenge from local physio Joe Washington. Joe collected another second place, but can take solace that there were no costly navigational errors this week, only the vapour trails coming from Andy to deal with. Pint-sized Andy, five foot nothing of sheer class, loves running so much that he recently entered himself into a four man relay event, and ran all four legs himself, coming 5th out eighty teams overall in the process.

Calder took the team prize with excellent runs from Graham Hill, the debonair Chris Standish and golf ace Iain Powell securing the spoils. Other fine runs came from Michael Dean, Super Dave Culpan, Blair ‘Getting Faster” Garrett and Calder’s Lakeland warrior Dan Biggs, who continues to shed weight at a rate of knots. He’s living proof that the fell running diet is second to none!