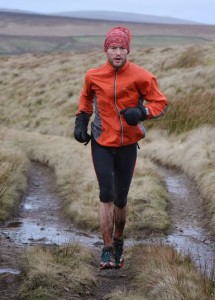 Calder Valleys Flying Scotsman Ian Symington showed his ultra distance credentials in the local Runfurther event the “Longer” Calderdale Hike placing a fine second behind the experienced Kim Collinson of Borrowdale Fell Runner on Saturday. In a time of 5 hours and 28 minutes Symington was only 4 minutes adrift of Collinson. The Hike, organised by St Pauls Scouts in Sowerby Bridge, traverses in its 37 miles some of the stunning local tourist attractions in the Calder Valley heading up to Stoodley Pike, Great Rock, Widdop Reservoir returning via Jerusalem Farm before it finally stops where it started at Sowerby Bridge Cricket Club. In what was a chilly, windy day team mates Simon Bourne in 4th and Chris Mawdsley 5th its all looking good for a top team placing in the Lakeland 100 Ultra ‘Tour of the Lake District’ event in July. In what is classed as the shorter Calderdale Hike of ONLY 27 miles Calder’s Kevin Hoult took the win in a record time of 3 hours 48 minutes … a marathon around the Calderdale hills and bogs in that time now that is some going. He beat his team mate Ben Frechette for the win as Ben is battling back to fitness after a lay off with an ankle injury. It was the turn of the club runners on Sunday, who were chasing championship points, to do battle at Boulsworth Bog near Wycoller. The 8 mile route, a mixture of good track, woods and as the name suggests bog, ascents to the hill of Bouslworth before descending steeply on the moor to pick up the return route for a short way before a welcome detour to the woods on the way to the finish line. Calder’s new recruit Karon Forster had a great run to secure 1st women in 1 hour 8 minutes with team mate Jackie Scarf pushing her all the way and only less than 30 seconds adrift. Savile Parks Andy Thorpe made his first appearance in the club championships and took maximum points in a fine 4th place time of 55 minutes and 3 seconds. The winner Nick Charlesworth (52 mins 30 seconds) from the host club Wharfedale Harriers also led his team mates to secure the top team prize.