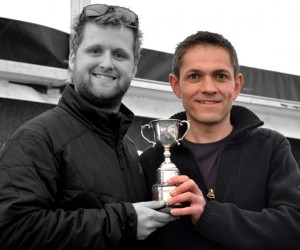 The Three Peaks Race is one of the most established and possibly the most revered of all fell races, don’t mistake this superb race with a misguided charity event that involves driving around Britain trying to get to the highest points of England, Scotland and Wales in 24 hours.

Starting from Horton-in-Ribblesdale, the route leads out of the village and heads towards the first and lowest peak, Pen-y-ghent, with the summit of 2,262 feet reached just before the four mile mark. Last year’s race winner, Joe Symonds of Kendal, but this year running for the Salomon International Team rather than his Scottish club, Hunters Bog Trotters, was ominously first to the summit in 28.46. Next summiteer, was Joe’s team mate, Tofol Castanyer of Spain in 29.02. The only other runners to reach here in under 30 minutes were Andrew Fallas of Carnethy, Carl Bell of Keswick, Adam Osborne of Leeds and Rob Jebb of Bingley. In ninth position at this point in 30.16, and possibly running slightly more sensibly, was our very own Karl ‘Earl’ Gray or ‘Karlos the Jackal’, as he is known amongst his fellow elitists! Just in front of Karl were Oli Johnson of Dark peak and fell running legend, Ian Holmes of Bingley. In the ladies race, another Spanish Salomon International Team member, Oihana Aranzeta, was leading, by 20 seconds in 34.42 from Claire Gordon of Hunters Bog Trotters. The next three ladies, Jasmin Paris (35.37), Jill Mykura (35.55) and Helen Bonsor (36.29) were all from Carnethy.

With runners being greeted by wind and sleet on Pen-y-ghent, the leaders turned and made the mile or so descent before starting a fast four and half mile section of track, with a little road running, to Ribblehead. This fast running can be the curse of many a runner as they later toil up Whernside and Ingleborough after pushing too hard too soon. At Ribblehead Joe had increased his lead to 78 seconds with Carl and Tofol in joint second place in 1.15.05. Karl was pacing well and was still in ninth place in 1.17.43. Oihana was now in control arriving at Ribblehead in 1.29.21 nearly two minutes clear of Jasmin with Claire over a minute further back just in front of Jill and both nearly a minute clear of Helen.

The three mile stretch of boggy and slightly uphill running from Ribblehead to the base of Whernside is possibly the toughest running of the whole course. Then from the base of Whernside there’s no let up as the climb steepens to the highest summit of the peaks standing at 2,374 feet. With Joe’s strength being his climbing it was no surprise to see his lead extended to almost four minutes as he hit this checkpoint in 1.42.06. Andrew and Rob had moved up to second and third respectively with Rob also showing his climbing prowess, moving up from seventh. With Karl taking a more leisurely climb he fell a little further behind in time, but moved up to eighth in 1.47.53, with Ian starting to fade. Tofol on his Three Peaks debut had also slipped to sixth. Oihana and Jasmin held their pace but were starting to pull clear of Claire and Helen who in turn had left the slowing Jill.

Some say the race starts from the top of Whernside and the descent to Hill Inn is Karl’s forte. His time of 16.05 for this section was by far the quickest of the day and maybe his tactics were paying off? We are now sixteen miles into the race and Joe was now just over four minutes clear, obviously he’s not just a fast climber! Rob Jebb had established second place now and had a 44 second lead over the resurgent Tofol but there were just 14 seconds separating Tofol and Karl, still in eighth, but with five runners now in his sights. By now Jasmin was only 24 seconds behind Oihana (2.2544) but as both ladies were first time Three Peaks racers who would be stronger was hard to call. Helen had moved clear in third in 2.30.14 with Jill 2.33.01closing in on Claire (2.32.01).

Another tough section of slightly uphill running is from Hill Inn to the base of Ingleborough. Then it’s the last climb of the day which is slightly gentler and lower, at 2,370 feet, than the Whernside climb. Again, showing his climbing is supreme, Joe hit the top of Ingleborough in 2.24.46 with a lead of over five minutes from Rob. Andrew now in third had started to close in on Rob moving away from the chasing pack with Carl over a minute behind in fourth. Karl had now moved up to fifth just twelve seconds further back but with over a minute in front of sixth placed Oli. Noticibly, Tofol, after his fast descending had slipped back to eighth, over twelve minutes behind the leader. Oihana, maybe sensing that Jasmin was closing in, accelerated increasing her lead to 50 seconds having reached the summit in 2.57.42. Helen was now in no-mans land nearly five minutes behind Jasmin but over six minutes clear of Claire and seven minutes clear of Jill.

All that remains now is a downhill dash of about four miles over the limestone pavements back to Horton. With first place almost guaranteed to Joe barring any terrible mistake the race was on for the remaining podium positions. With Carl and Karl being the best descenders they managed to overhaul the tiring Rob and Andrew to take second and third, with Carl edging out Karl by just six seconds in 2.59.44. Joe avoided any tragedies and was waiting with tea in hand having finished in 2.54.39 to take his second Three Peaks win and now needs one more to emulate his father Hugh. With the win in her sight, Oihana took a nasty tumble on the limestone allowing Jasmin to win the race in 3.33.04. Oihana managing to hold in to second in 3.36.29. Helen took third in 3.39.07 with Jill in fourth in 3.46.20. Claire struggled from Ingleborough and eventually finished in seventh after being overtaken by the fast finishing Helen Elmore of Dark Peak and Deborah Gowans of Accrington.

A lot of CVFR members completed the course for the first time and a big pat on the back to all of them but special praise to Kate Mansell who finished the course in agony after suffering an ITB injury coming off Whernside. Special praise also to Helen Buchan who compromised her own race to accompany Kate over the final stages of the course.

Next year is the 60th anniversary race and Karl is already targeting his maiden Three Peaks victory and there could be no more fitting result than a win for ‘Diamond Geezer’ Gray.