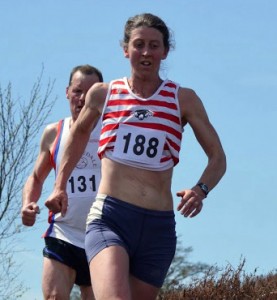 Calder Valley’s Jo Buckley was in record breaking form at a sun-drenched Coiner’s Fell Race in Mytholmroyd on Monday. The race (7.5miles/ 1330ft ascent) runs from near Mytholmroyd Community Centre up to Stoodley Pike, then sweeps back round passing the famous Bell House farms of the notorious Coiners baddies of yesteryear, with a steep, contouring final descent back down towards Mytholmroyd.

Jo powered home to set a new course record of 1:00:15 and claim the coveted ladies’ prize, finishing 11th overall. In the process she nabbed the course record of her Calder team-mate, England runner Helen Fines. Backing Jo up to help CVFR win the ladies’ team prize were the indefatigable Jackie Scarfe and Charlotte Whetton who both put in fine runs.

Jo set the early pace and pulled clear of the ladies field across Cock Hill Moor, then demonstrated her climbing virtuosity with a rapid ascent up to Stoodley Pike from London Road. This steep section was added to the route last year and has proved a popular addition, giving Coiners a truer fell race feel, and about 400ft extra climb thrown into the bargain.

In the men’s race, Wharfedale’s Christian Holmes took the honours in 54:38, with the resurgent Ben Frechette being top-placed Calder in a career-best 5th place. Just behind Ben were Rob Dobson and ever-present Rob Paradise in 6th and 11th respectively. Paul Hobbs was highest placed Tod Harrier in 4th.

Big thanks go to Nicky Murphy, Jon Emberton, Graham Lloyd and the rest of the team who staged such a slick event, and to all the helpers at the finish line handing out the water to some very hot and bothered runners.

On Saturday, it was Calder maestro Jo Waites’ turn to lift the silver as she won the ladies race in the popular Cake Race (10 miles/1700ft) out of Diggle in Saddleworth. Jo finished 19th overall posting a strong time of 1:14:37.

In the men’s race, Calder’s Jason Williams was a superb 2nd as he tamed the testing course with a high calibre run with his team mate Andy Fleet taking a superb 3rd place. As the name suggests, the theme of the race is ‘bring a cake’ and there was certainly no shortage of confectionary at the end in Diggle Church. However, most of it was polished off by Calder’s Ben Frechette who, after underestimating the 22 mile trip from Cragg Vale on his push bike, arrived in the nick of time for the race, ran the ten mile route in 1:25:35 and then, on the verge of exhaustion and acute sugar deprivation, darted straight into the tea room and devoured a plate full of Battenburg slices, three chocolate éclairs, two Bakewell tarts and a prize Victoria Sponge. He then had to ride home.