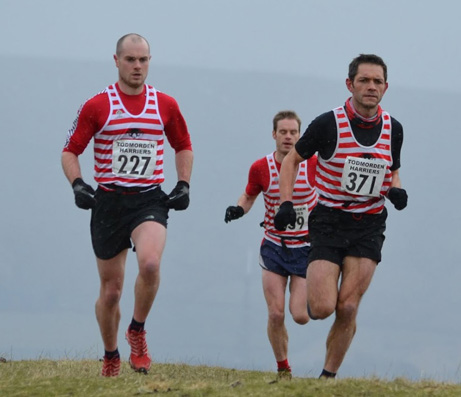 Calder Valley fell runners were in the ascendency on Saturday with an impressive 1-2-3 at the Flower Scar Fell Race in Todmorden.

The 6.5 mile race centres on Todmorden Cricket Club and takes in over 700m of gruelling climb, a fair old chunk for a race of this length. The route takes you steeply out of Centre Vale to Todmorden Edge, passing close by the old Sourhall Pub that older readers may well remember fondly – if somewhat hazily, then onward out toward Flower Scar Hill. You then descend to Roundfield, then contour along Barewise Wood and Robinwood, followed by a sanity-testing climb back up to Todmorden Edge before the eyeballs-out descent back to the cricket field.

The race has taken on a different guise this year, being slightly longer in route, and also moving from its former midweek summer slot. It now sits in the calendar in the weekend of the old favourite race, the much missed beast ‘Noonstone’, and is expertly staged by John Wright and his fellow Todmorden Harriers.

But it was Calder Valley that upstaged their local rivals with Karl Gray again showing why he is one of the country’s best fell runners with a virtuoso display. There is only one shade for Gray these days and that is victory, but he had to be at his high speed best to hold off the valiant challenge from club mate Tim Ellis, who pushed him very hard to the tape. A mark of how well these two ran is that Alex Whittem – no slouch himself – was a distant third, a hefty three and half minutes behind.

First lady was Todmorden’s Lauren Jeska who finished in an outstanding tenth place, with first Calder Valley lady home being Sally Newman, still as sprightly as ever, in an impressive 61st place. Special mention must also go to Middleton’s legendary Roy Lee, a one-man Vet 80 category, who came in in 239th place. Not bad at all for a guy of 82, and a shining example to us all.

Nearly 250 runners competed demonstrating the increasingly popular nature of local fell running, especially over this sort of distance, and many stayed on afterwards to enjoy the fine hospitality laid on by Tod CC & Tod Harriers in the clubhouse.