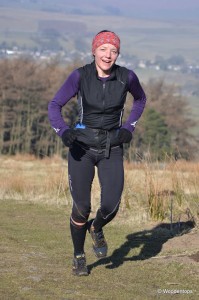 Near to the village of Silecroft in the south-west corner of the Lake District National Park, stands Black Combe. 2000 feet above sea level, 10 miles away from any higher ground, the isolated peak makes a daunting location for a fell race. Clearly visible from below is the immense, dark-coloured glacial corrie, known as Black Combe, from which the mountain derived its name. The Black Combe Fell Race makes 2 epic ascents of this fearsome fell, resulting in a total of 3400 punishing feet of climbing, in only 8 miles. The race attracts some of the best fell runners in the country, many of whom live and train on the local Lakeland Fells.

Demonstrating her credentials as one of the UK’s strongest female fell runners Calder Valley’s Helen Fines produced another magnificent performance, conquering Black Combe’s crags, to win the ladies race in a top class field, with the elite Lakeland pair of Lizzie Adams and Anna Lupton hot on her heels in second and third place. Fines was first lady (1:23:27) and finished in 24th place overall in a field of 161.

Fines was fortunate not to be disqualified however, as it later emerged that the Calder runner had been so focused on her race strategy that she had left the vital timing chip in her car, and was consequently unable to check-in at the various control points. Race organisers took sympathy on the distraught Calder runner having confirmed that she had correctly followed the route and was not guilty of any under-hand tactics. Helen’s face matched the red hoops of her shirt as she was warned to be better organised in future.

Fines had to give the race itself her full concentration; she was made to fight hard for her victory, finding herself in second place on the first climb, as Black Combe Runner Lizzie Adams took an early lead. Adams used her speed to pull away from Fines on Black Combe’s summit plateau, but Helen exploited her technical expertise to fly past Adams on the plunging descent from White Combe to Whitecombe Beck, with elite international, Anna Lupton pushing Adams into third place.

As the race then made the stream crossing, Fines had a slight advantage over Lupton, but the 3 runners were still locked together, only separated by 20 seconds. Adams then made a bid for pole position, using her up-hill strength to move ahead of Lupton on the final climb. Adams was gaining on Fines as the runners made their torturous return to Black Combe’s summit, and it seemed that she might be destined to steal the lead. Fortunately the Calder Valley runner held off the Adam’s surge, to reach the Black Combe summit cairn 15 seconds ahead of her rival. Fines was then able to throw herself down the 1500 feet descent to the finish line, with another display of high speed courage and skill, leaving the chasing Adams and Lupton to fight it out for 2nd and 3rd place, surely wondering how Calder Valley’s Fines managed to steal the glory in their Lakeland backyard.

Equally impressive was Calder Valley’s Tim Ellis who finished in a tremendous third place (1:11:08 ) behind the international, and national champions Ricky Lightfoot (Ellenborough AC) and Rob Jebb (Bingley Harriers). Ellis finished only 3 minutes behind the winner and was within 2 minutes of Jebb, whilst beating off the formidable Borrowdale quartet of seasoned race winners; Ben Bardsley, Jim Davies, Gavin Bland, and Simon Booth. Ellis must now be due a series of race wins particularly if he returns to events with less star-studded fields.

The delighted Fines said “My race plan is always the same, I’m one-paced so I run at threshold capacity throughout short and medium races, and hope my legs don’t give way if there’s a lot of uphill. They were getting a bit knackered by the top of the last climb, but I glanced behind and saw Lizzie so I had to find a bit extra!”

Jo Waites made it 2 wins in one weekend for the unstoppable girls of Calder Valley. Jo travelled to the Yorkshire Dales to take on the Trollers Trot long distance challenge. The 25 mile race is a true test of endurance with 3750 ft of ascent across some of the finest scenery in the Yorkshire Dales . Blassed with glorious spring sunshine, the event started at Bolton Abbey, and visited Simons Seat, Trollers Ghyll, Burnsall, Linton Falls, Winterburn Reservoir, and Rylestone Church, before returning to Bolton Abbey over Rylestone Fell. Jo Waites not only won the ladies race in 3 hours 11 minutes, but was an incredible 3rd overall in a field of 230. The Blackshawhead runner has now won 3 races in recent weeks having made an immediate return to form following her 2012 injury woes. Jo’s partner Paul Bidulph was not far behind in 10th place (3.29). The race was won by Richard Pattinson in 2.50.