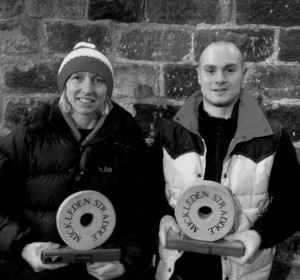 A busy weekend for the red and white saw some blazing performances and silverware aplenty returning to the Valley from various races in the region.

Local Blackshawhead star, Jo Waites demonstrated her class by winning the 23 mile Rombald Stride Winter Challenge for the fourth consecutive year, making light work of the tough terrain in a superb time of 3hrs 9mins. After recent tribulations with injury, Jo is now firing on all cylinders once more and can no doubt look forward to many more victories soon.

The race isn’t for the faint-hearted with 14.3 miles and 2431 ft of climb, typically fruity High Peak weather and muddier than Tod’ Park underfoot. The fact that Helen finished fourteenth overall gives you an idea of the quality of the race she ran. She was heroically supported by Jackie Scarf and Helen Buchan, enabling CVFR to take the Ladies’ prize.

In the men’s race, more laurels followed with a fantastic Calder Valley one-two – Tim Ellis beating a strong field to take first place with a lively time of 1:39:27 and Club Captain Ben Mounsey not far behind in second place. The men’s team were second overall.

Completing the clean sweep was Jason Williams who won the Lads Leap Fell Race, held at Crowden just off the Snake Pass. This illustrated that fell racing isn’t all about speed, especially in a thick clag with various route options. Jason combined sound navigation and common sense, a touch of fortune, and a sterling second half to come in first. A few of the leading pack got lost, including local fireman and top runner Shaun Godsman, who mislaid his bearings upon the moor. Rumour has it Shaun is very good at putting fires out, it just takes him a while to find them! Well done everybody on a great start to the season.