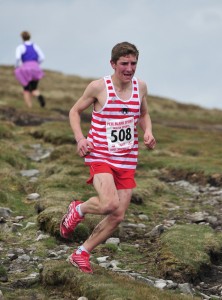 The Pendle Fell Race is a lung busting 4.5 miles with 1500 feet of ascent. The racers start in the village of Barley from where they head almost to the summit of the hill before hurtling down a rocky track to its foot again. From here it’s a leg burning ascent up the steep face, before charging back to the village.

The under 18 runners competed in the senior race, which attracted some of the very best talent in fell running, including race winner Robb Jebb, the double English and British fell running champion, and international runner. In such esteemed company, Brad finished an excellent 9th overall in a time of 34.04. The Traviss family had double reason to celebrate: Brad’s younger sister Molly (Halifax Harriers) was second female in the under 16 race. Other Calder Valley competitors in the field of 284: Bill Johnson (37.52), Steve Smithies (47:53).