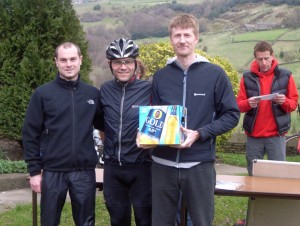 Winning team with race organiser Shaun looking at Karl's record winning time & wondering "Just how does he do it"!!!

Calder Valley Fell Runner’s Karl Gray shows no sign of slowing down when the Veteran fell running maestro smashed his own course record at Saturday’s Midgley Moor Fell Race. Gray broke the eleven year old course record last year and he lowered that time by more than a minute at the weekend.

The race is one of the truest fell races in the area because it features a mixture of terrain and it allows runners to make their own way between some of the checkpoints. As the heather grows and patches are burned off each year, the opportunity for new routes opens up while previous short cuts become a slow churn through coarse vegetation.

The race sets out from Booth and climbs high up to the summit cairn of Midgley Crow Hill within its first mile. The race then crosses the moor to the nearby summit of Sheepstones before the long descent into Luddenden Dean. A long climb up the valley and traverse across the moor precedes a rapid descent into the starting field.

Gray led the race from start to finish, but was tracked by club mate Tim Ellis. As Gray pulled away from Ellis on the final climb, Ellis used his racing nous to wait for the next set of runners to ensure that he didn’t take a wrong turn on the tricky unflagged sectionacross the moor. Ellis was then able to kick on and hold off Rossendale’s Ashley Holt to finish in second place, with the Rossendale man finishing in third. Calder’s Andy Thorpe demonstrated the benefit of some winter training by taking a deserved sixth place and those three comprised the first team.

In the Women’s race, Helen Fines ran Janet McIver’s course record very close, although Calder Valley’s Sally Newman was hot on her heels in second place. Anne Johnson returned to racing with a fine third place to make it a clean sweep of prizes for the organising club.