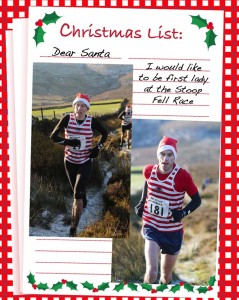 With snow covering the fells Christmas Wishes came true for some of the members of Calder Valley Fell Runners at The Stoop race on Sunday. The sun shone but with it was a chilly day for the 256 starters on this 8k fell race. Conditions underfoot varied from an ice rink to deep frozen, energy sapping bogs. Race winner young Sam Tosh of Rossendale Harriers found his fair share of the bogs and mud but managed to slip slide his way to take a great victory from fell legend Ian Holmes, past race winner on countless occasions. An improving Alex Whittem was the best placed runner from the local club taking a great 3rd place and just 30 seconds behind Holmes. Calder’s Steve Smithies is getting back to race fitness with a top 20 place and 4th V40 overall. The ladies race was dominated by the Calder ladies with Helen Fines taking the honours as first lady home. After a frustrating year due to injury this will be a good year end confidence booster for the Calder ladies captain. Anne Johnson was hot on her heels in 3rd place and also took the top lady vet 40s prize. Team mate Jo Buckley, who has had a very busy successful running year took time to enjoy the race and placed 4th lady and in doing so helped her club mates to a team victory. 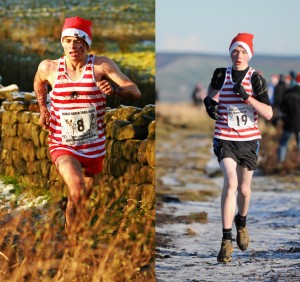 Calder Valley juniors rounded the year of the way they have run all year with two excellent performances. After an invite from the race organiser of the Hurst Green Turkey Trot that he found impossible to ignore Max Wharton raced through the cold wet conditions to finish second. Max could have no complaints about not winning as on the day the only other runner able to beat him was non other than International marathoner Andi Jones.

Meanwhile closer to home Edan Whitelaw decided to round of his U14 career with a tilt at Max’s course record for the quarry runs over at Haworth. Despite icy conditions and finding himself with no one able to give him a race Edan managed to record the 4th fastest time over the race route just 17secs outside of Max’s record. Had the conditions been better under foot then who knows whether he would have got it. Non the less a great effort and showing that he is also running extremely well at the moment.