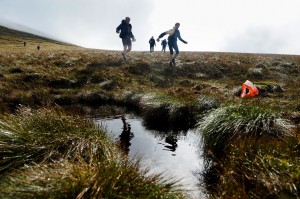 A checkpoint on day 1

Held this year from Bethesda in Snowdonia, the competition is a “score” format: visit as many checkpoints dotted in the mountains as possible in 6 hours on Saturday on your way to the overnight camp, carrying tent, stove and all the equipment you need for a night in the wilds. Then run back next day, visiting more checkpoints in a maximum allowed time of 5 hours. The leaders cover 20+ miles on Saturday and only a little less again on the Sunday, climbing something like 12,000′ of ascent over the weekend.

The standard course winner was Steve Watkins of Baildon Runners, and the elite winners were Bob Johnston (Dark Peak) and Charles Stead (NFR).