Slogging it out for good causes in extreme weather

Two more CVFR club members gave it their all in the last fortnight for charities close to their hearts. 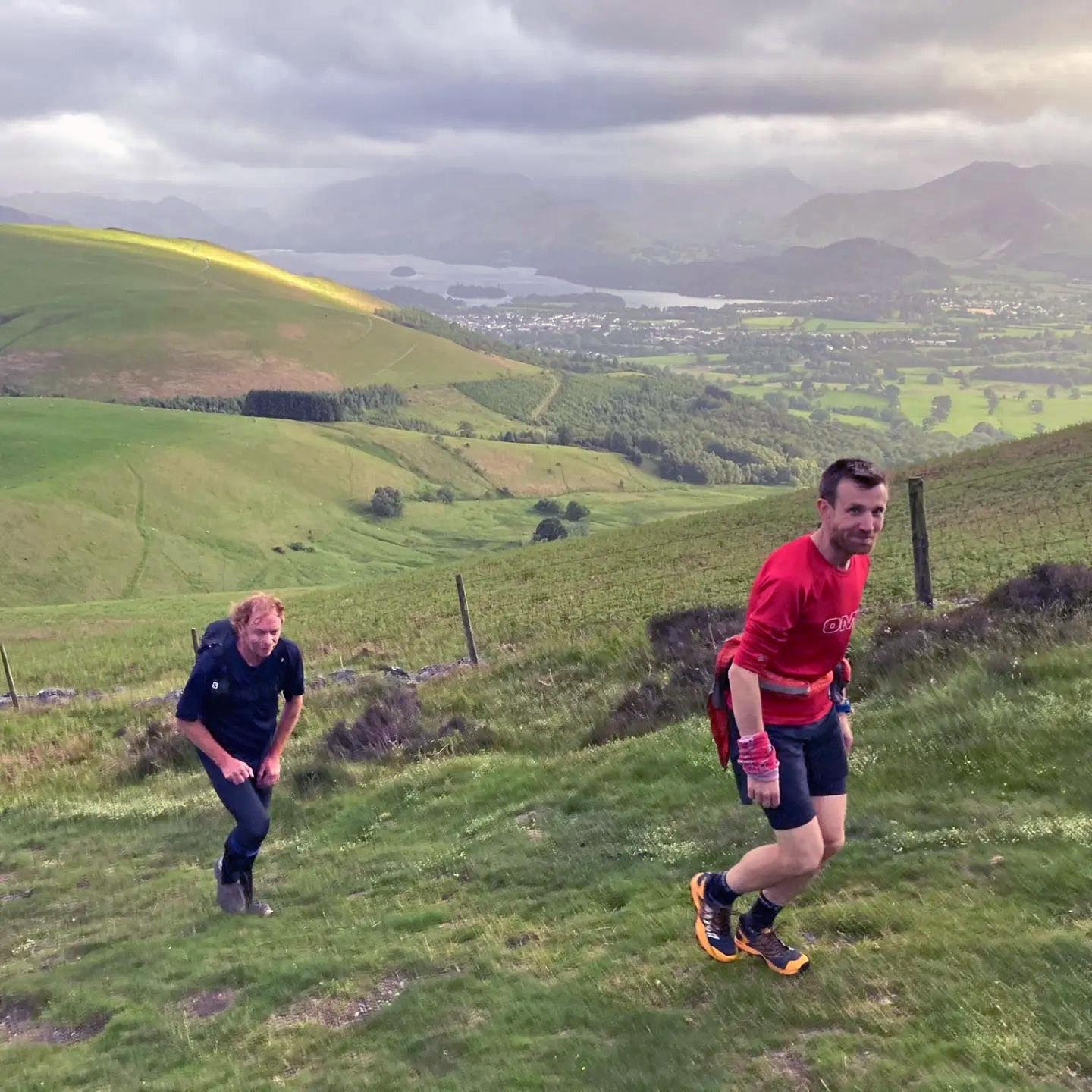 The briefest appearance of the sun

On Friday, 10th June at 8pm, local jeweller Toby Cotterill set off on the beast that is the Bob Graham round – a route with a 200 year history, first run in its current form in 1932 by Bob Graham on his 42nd birthday. This 66 mile circuit takes in 42 mountains in the Lake District, and includes a mind-boggling 27,000ft of ascent (pretty much the height of Everest). To ‘successfully’ complete the round, runners aim to finish this physically and mentally challenging route in under 24 hours. 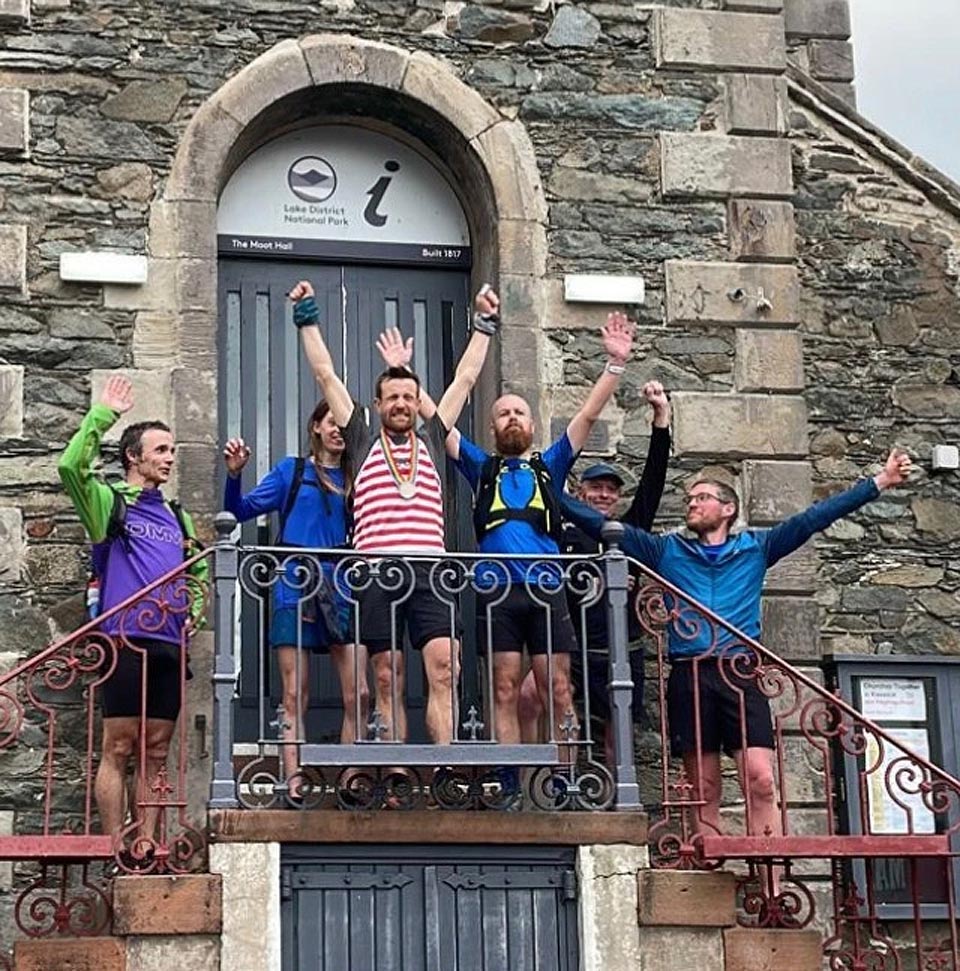 Cotterill stormed the round in 21 hours and 49 minutes – with ‘storm’ being unfortunately the optimum word. As if the distance and the terrain were not enough to contend with, the weather also definitely decided to not play ball. Leaving Toby and his support team contending with 50-60 mph gales on multiple exposed summits. As all experienced mountain runners do, they discussed the wisdom of pulling the plug on the exploit – not least as local races were cancelled. However, given their combined mountain experience, they decided to fight on and were rewarded with a successful round.

Cotterill describes the final stretch into Keswick as ‘the finish of his dreams’, with his two children running the last bit with him up to the iconic start/finish steps at Moot Hall, plus random people cheering. He then found himself rewarded by a beer and the most special award he will ever be given, a hand-made medal loving crafted by his youngest.

This challenge was undertaken in memory of Cotterill’s wife Cat’s Mum – Gabrielle, who following a pancreatic cancer diagnosis last summer, didn’t even make it to Christmas. Pancreatic cancer has some of the worst survival rates of all cancers – only 3 out of 4 people survive even one year post-diagnosis.

At the time of going to press, Cotterill’s Bob Graham has raised over £1000 for this worthy cause.

You can donate to fight this terrible illness at @pancreaticcanuk or via Cotterill’s JustGiving: https://www.justgiving.com/fundraising/tobycotterill

Much further afield, Calder Valley committee member and club stalwart, Manhar Patel was the first (and only) red and white stripped vest to take part in the Uganda Marathon, on Saturday 4th June in Masaka. Patel is raising money for the Uganda Foundation, a charity which works to create projects to alleviate poverty in rural Uganda, by helping local people to save money and aiding local communities to become more self-sufficient. Rather than being funded by grants and external funding sources, the Uganda Foundation gives supporters the opportunity to go out and experience the projects for themselves, raising money as part of their trip. 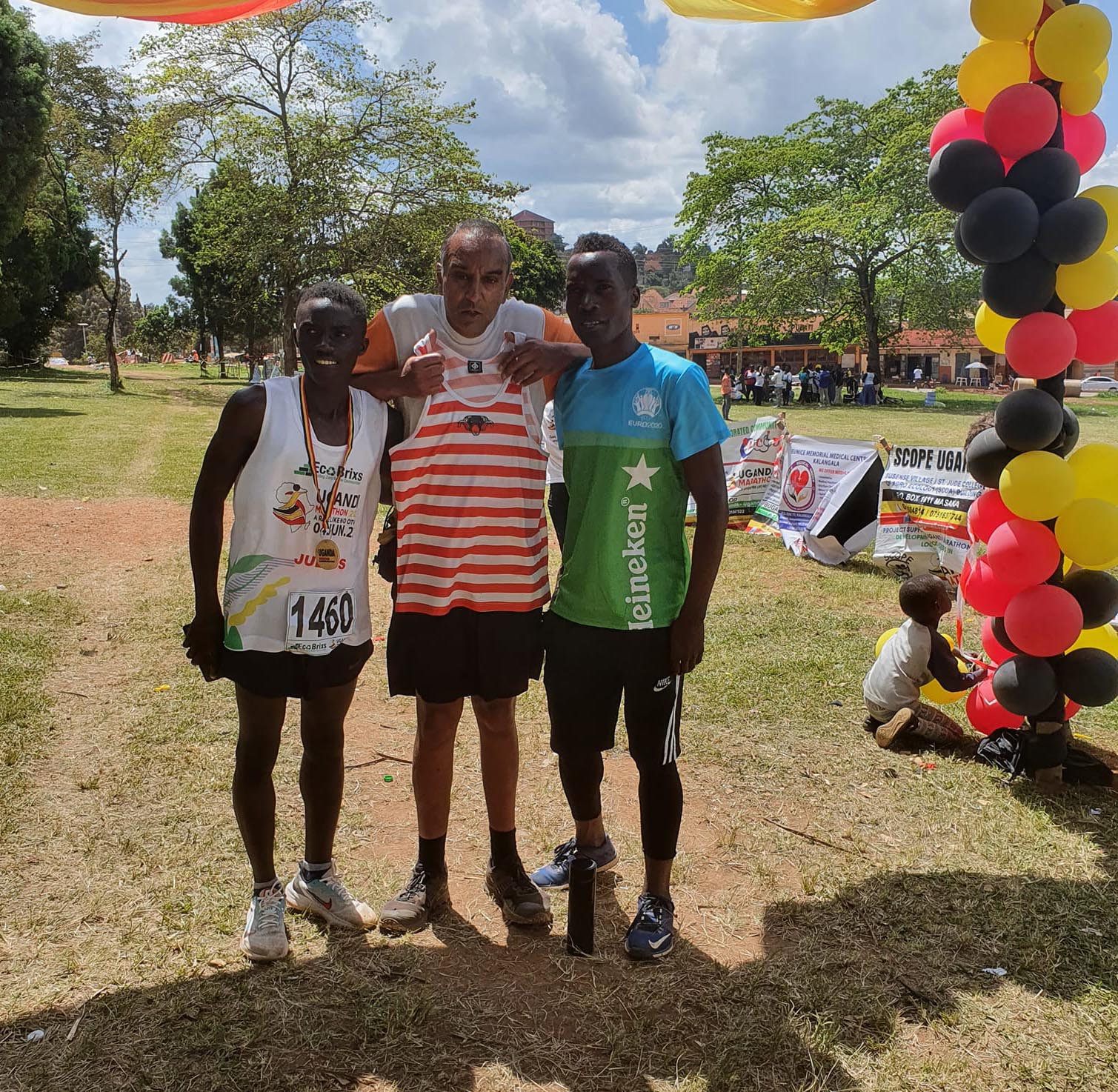 When asked how he found it, Patel’s first reaction was a typical understatement, ‘Boy, was it hot!’ He reports never having drunk so much water in his life! Alongside the amazing feat of competing in a marathon in May in East Central Africa, Patel also did some volunteer work during the week at a local school supported by the marathon organisation, amongst other projects.

To find out more and sponsor Patel’s marathon, go to: https://www.justgiving.com/fundraising/Manhar-Patel

Tuesday, 7th June marked the 11th of 12 Joe Brown Midweek Series races (also known as the Tuesday Evening Series). Each race in the series is only up to four miles long and held at a different location in North Wales and billed as part of introducing newcomers to the joys of fell racing. 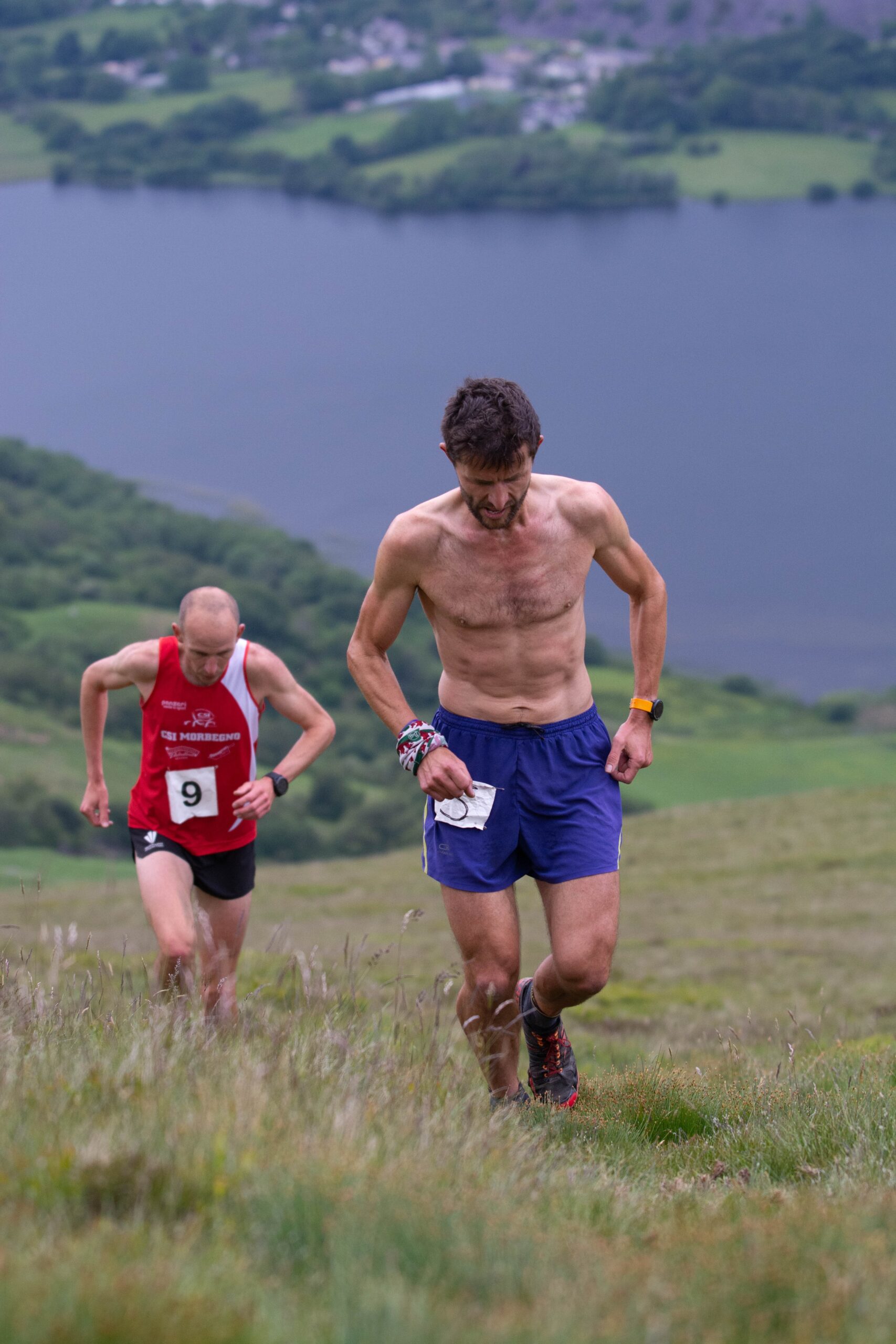 This week’s event was another good race-off between Math and Gavin Roberts. It was also essentially the decider in this series, where the best five racing results count (all ‘thrown into a scientific calculator with some odd equation to give you all a percentage score’, to quote Math). Gav went into this race – arguably the best in the series, held at Tal y Mignedd, the site of the 2018 British Championship Race, slightly in the lead.

In humid conditions, Math set a decent pace from the off, just about holding Gav off to the summit on a climb that involves an eye-watering 1800ft of ascent in only a shave over 1.5 miles. On the descent, Math put the throttle down, hoping to gain as much time as possible on Gav, but also looking to beat Karl Gray’s descent time from the British Champs in 2018.

Math took the win in 33:12, beating his previous PB on the course by four seconds, but unfortunately still four seconds off Al Anthony’s Vet 40 record on the course, and importantly 12 seconds shy of Karl Gray’s blistering descent from 2018. Gav soldiered home in 2nd place, crossing the line in 34:06.

Math now has the lead in the series, though there remains one race for Gav to fight back. Watch this space!

On the same Tuesday night in Bowland in North West Lancashire Preston Harriers’ Paddy Pole Fell Race also saw Darren Kay flying the flag for Calder Valley. This 3.7-mile/6-kilometre race with its 336m/ 1102ft of climb was comfortably won by Matlock AC’s Billy Cartwright, who finished just shy of two full minutes ahead of the remaining 97 racers, crossing the line in 26:44. Kay ran well to finish second overall and first male veteran runner in 28:41 – nearly a minute and a half in front of the third placed runner.

Also in the mid-week races, but closer to home this time, Thursday 9th June saw four CVFR runners take on 83 others in the Kettlewell Anniversary fell race, expertly organised by North Leeds Fell Runners. This is a ‘short and sharp lung-buster’ of a race ‘but still great fun’ – to quote CVFR runner Olivier Beaumont, with the route packing 1500 ft of elevation into its five miles/eight kilometers. There was a strong turnout of runners for this challenging race over varied terrain (track, grass and several bogs). Tom Adam’s took the win – finishing in 35:35, nearly a minute and a half clear of any other runner. Calder Valley’s veteran runners Karl Gray and Darren Kay both ran strongly to take the second and third place, with all three podium runners finishing well ahead of the rest of the field. Grey not only took second overall but also the win in the MV50 age category in 37:02. Ten seconds later Kay crossed the line in third overall. 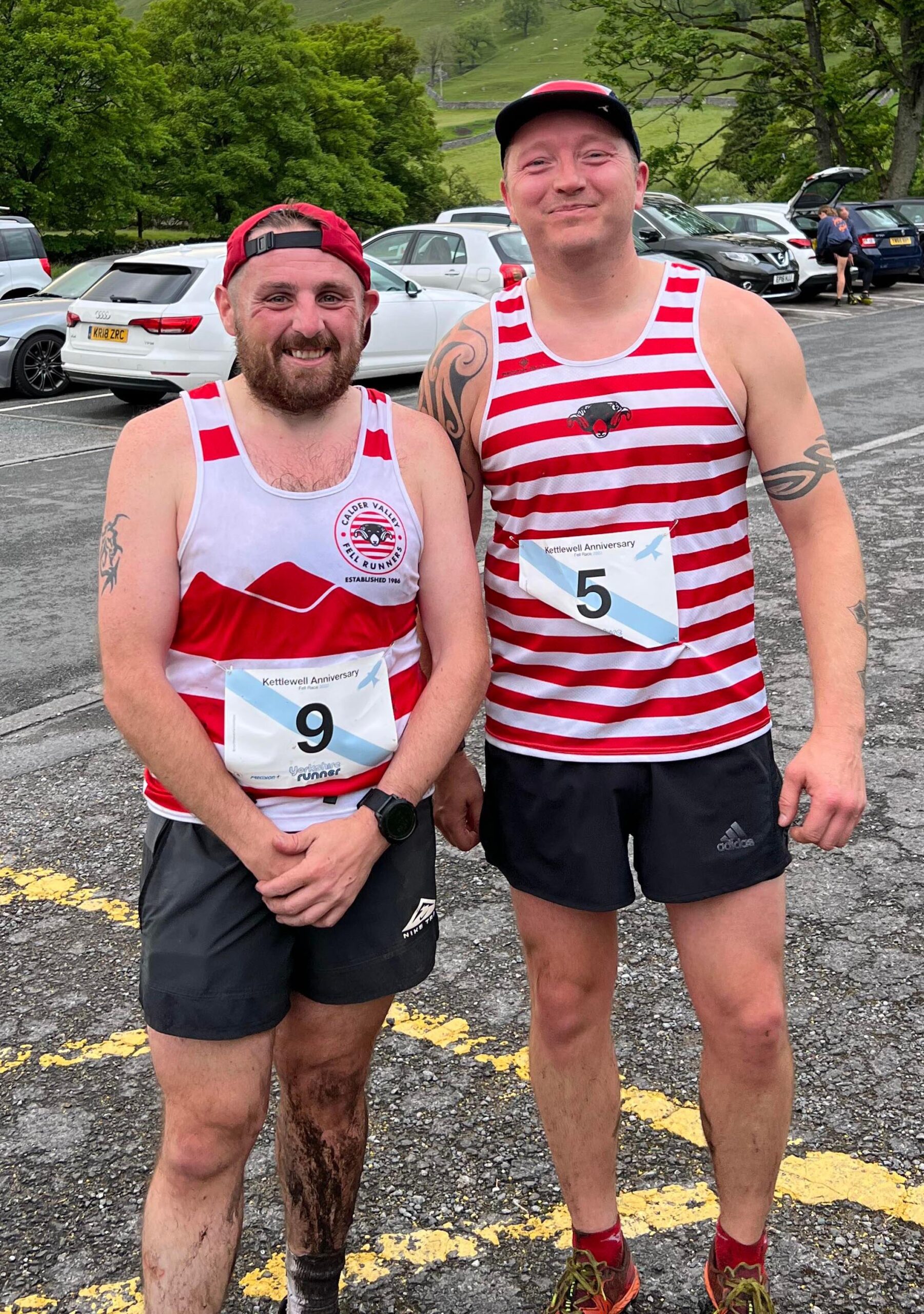 Dom and Olivier at the end of the Kettlewell Anniversary Race

There were also strong personal runs from CVFR’s Dom Camponi in 58th and Olivier Beaumont in 60th overall, with credible times of 56:27 and 57:18 respectively.