The post Easter into early spring Bank Holiday has properly marked the start of the Fell Racing calendar with weekday evening and weekend events to pick from all across the north of the country. And true to form, Calder Valley athletes – juniors and seniors – have been making the most of the dry weather and light evenings to get out and test themselves against each other, other clubs, ultra-running records and for some, nothing more than the terrain. 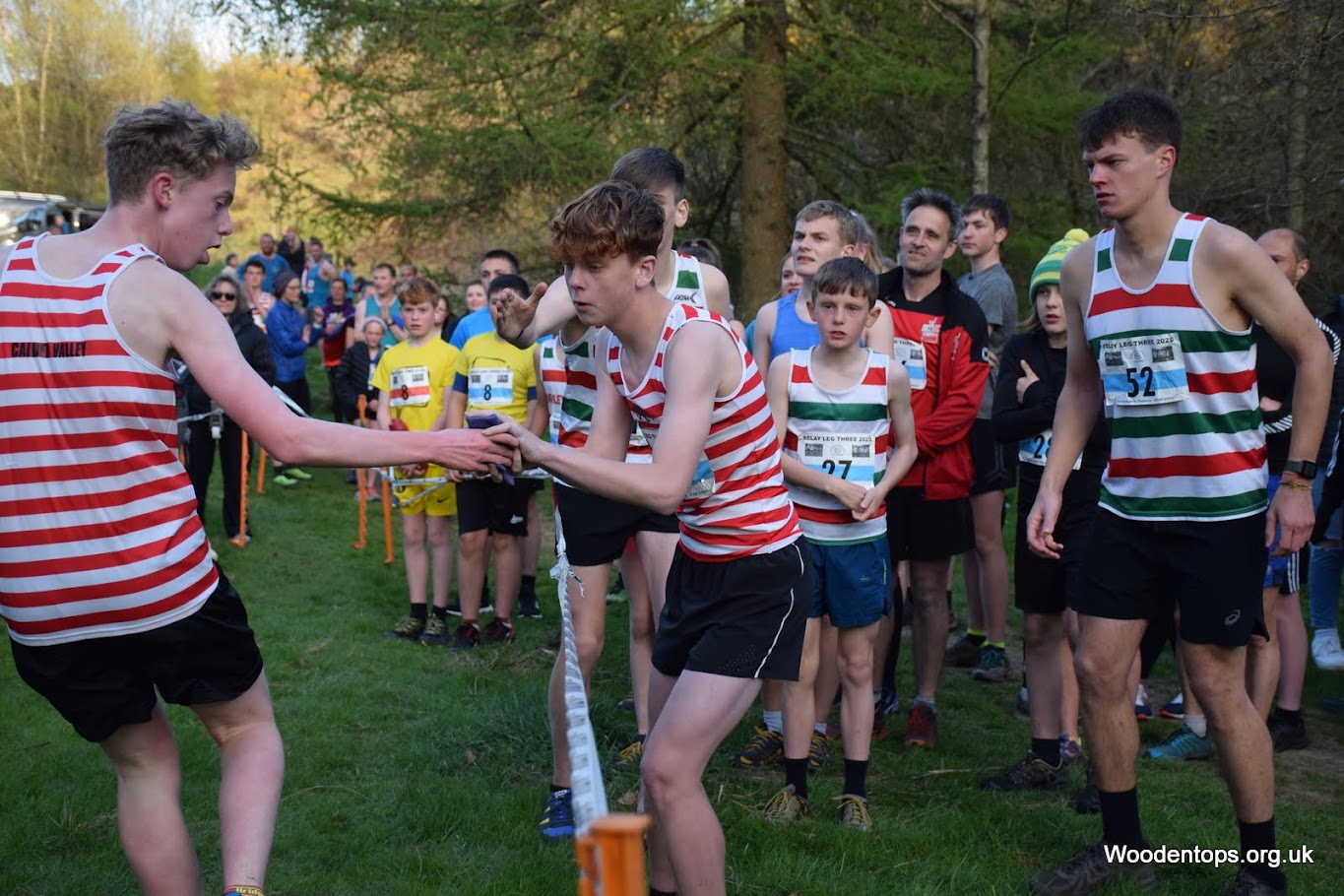 This week started with another of the famous Bunny Run events in the old quarry above Haworth that now makes up the bulk of Penistone Park. Bunny Runs because the map of the event is shaped like an oversized, floppy eared rabbit. The final event in the spring series are the Bunny Run relays – wild groupings of young and older, fast and slow with plenty of fancy dress and a carnival atmosphere about the event. Plenty of CVFR vests on show in and amongst the teams on the evening. 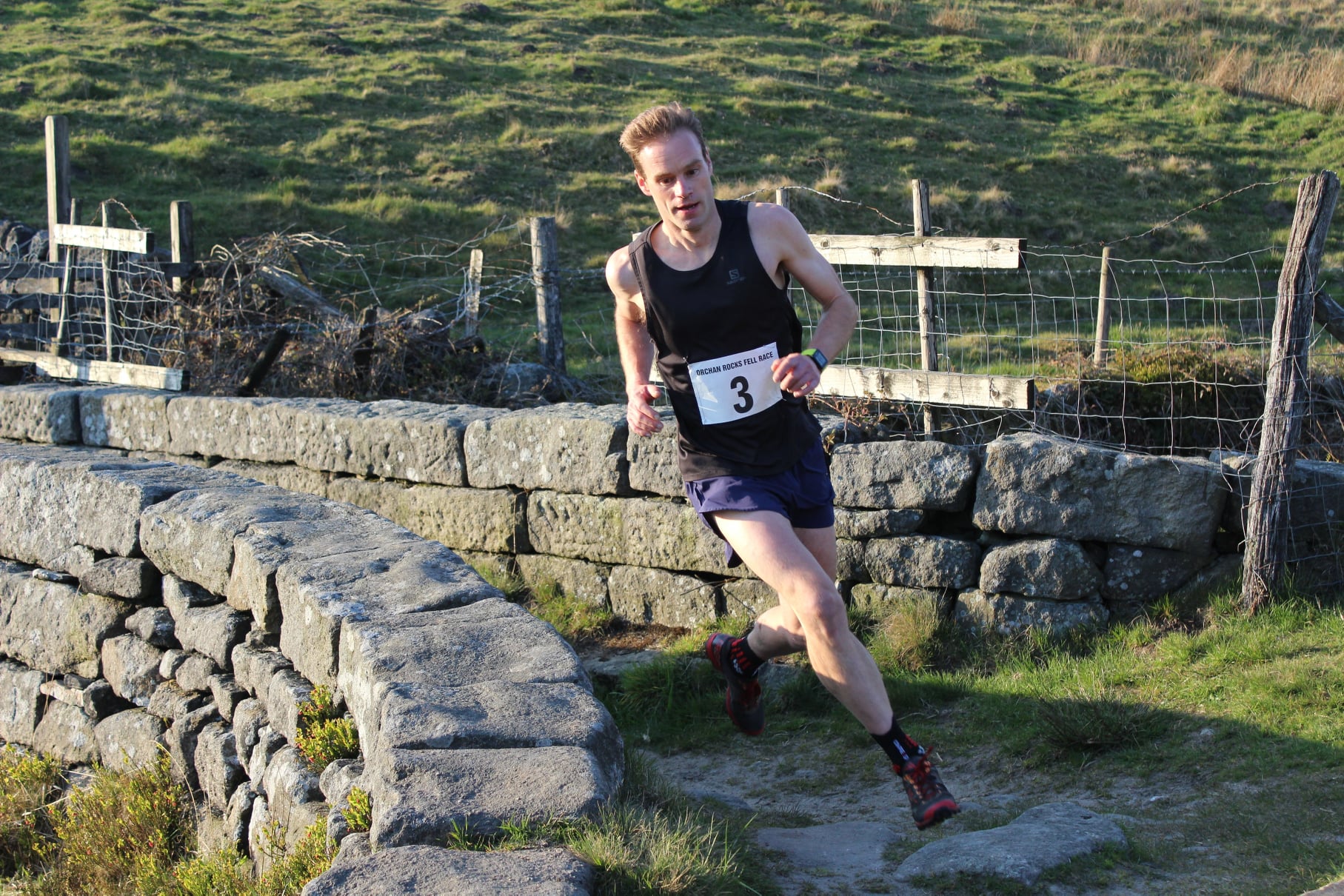 Next up was Orchan Rocks. A 5.4km fast and furious sprint around in the hills above the Staff of Life pub in Cornholme circling the tumble of gritstone that makes up Orchan Rocks. CVFR was well represented with five runners in this event organised by Dan Taylor of Todmorden Harriers.

Alex Whittem (23.19) was the first back for Calder Valley and 2nd overall shortly followed by Jonathan Moon in 4th place in 25.16. CVFR just missed out on the team prize with Andy Davies finishing in 38th position and first MV60 in 31.28. Robert Shirton was hot on his heels in 40th position (31.51) with Calder’s second MV60, Steve Cavell, coming in a respectable 77th in a time of 40.53. The race winner was Doni Clarke of Tod Harriers.

The first English Championship race of 2022 was in the North East at Guisborough Three Tops and attracted a strong contingent of CVFR’s elite athletes with fourteen men and five women representing the club at this incredibly competitive showcase of fell running. 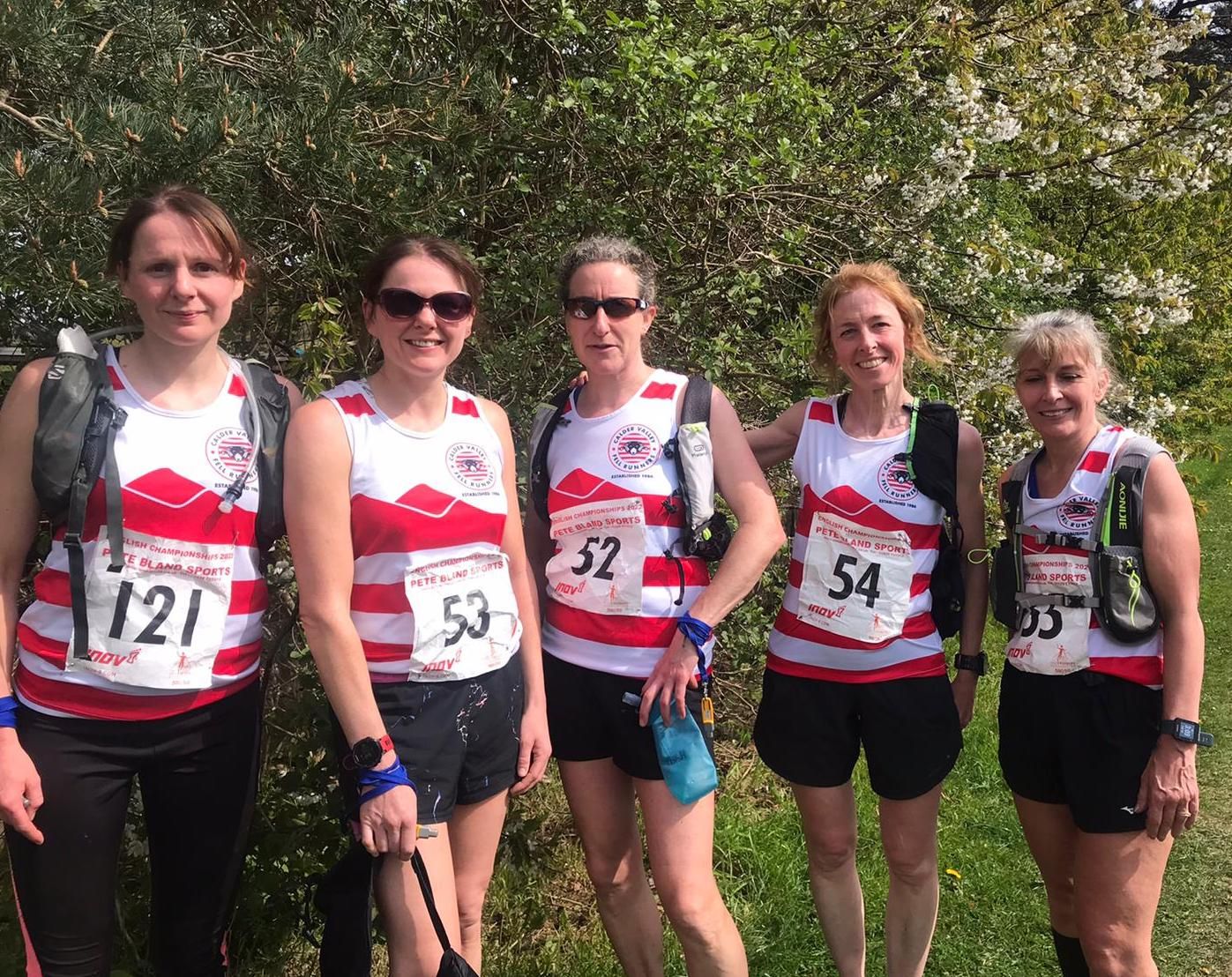 The course is a punishing one and after a short, fast road start, the post-2015 route takes runners on a rollercoaster route through Guisborough Woods before joining the Cleveland Way for a some out and back before some more ups and downs in the woods to the finish. The 15.92km route takes in some tough climbs with 800m of elevation making it an A rated course. Calder Valley’s women put on a great show and despite some real race pain along the way, CVFR took the Women’s v40 team prize. Natasha Butterfield was 3rd W40 with Trudi Entwhistle mirroring her as 3rd W50. 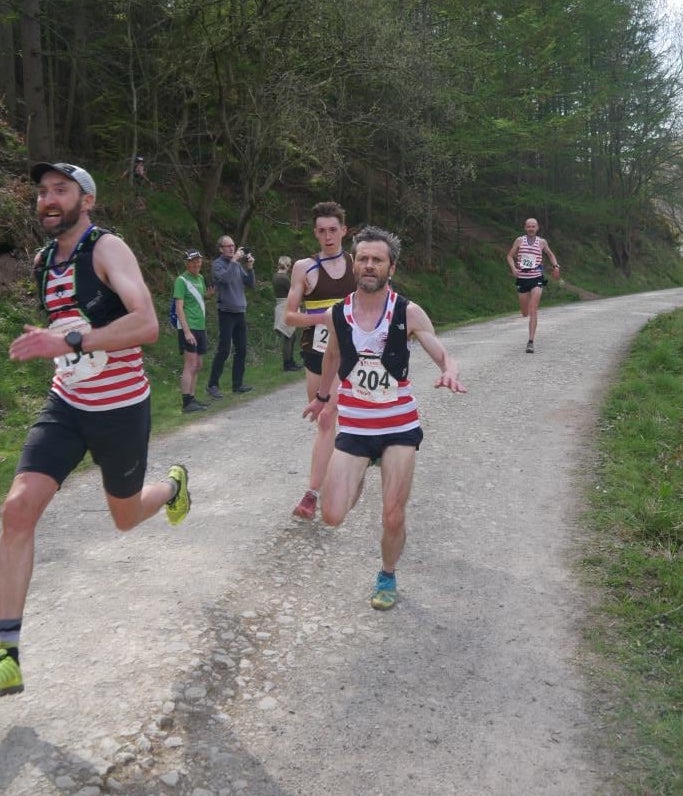 Amongst the men, CVFR made a good start to the championships with Karl Gray (6th overall) and Darren Kay (7th) both in the top ten finishers and both contributing to a clean sweep for Calder Valley in the M50 category with Gav Mulholland making up the numbers in 3rd place for the vets category. Ben Mounsey was 3rd M40 and Adam Osborne took bronze position in the M45 category.

A successful start to the racing season for the club and, while it’s still early in the programme, a real promise of medals across a number of categories for both the men and the women.

With the first English Championship race taking place in the North East, a hardy band of club members took to the three Yorkshire Peaks as their challenge for the Bank Holiday. Yorkshire Three Peaks is a classic Fell Race taking in the three peaks of Ingleborough (722m), Whernside (723m) and Pen-y-ghent (689) across 37.4 km and with 1,608 metres of ascent along the way. It may have felt cool in the breeze for most of us on Saturday but when you are challenging yourself for the entire length of this race, it will have felt like a hard run in a temperate climate.

On the day, 447 competitors started what was the 67th running of the event since its inception in 1954. This is an epic race and for most of the CVFR runners, their first attempt at the ‘marathon with mountains’. All five Calder Valley runners completed the course with Jonny Croston, well placed in 78th squeezing under the four-hour mark in 3.59.14 and the club’s only women competitor, WV50 Louise Williamson, finishing in 5.13.35. Congratulations to all the CVFR runners who took up the challenge with Darren Earnshaw (4.28.16), Dominic Camponi (4.49.32) and Oliver Beaumont (5.16.42) carrying the flag for the club. 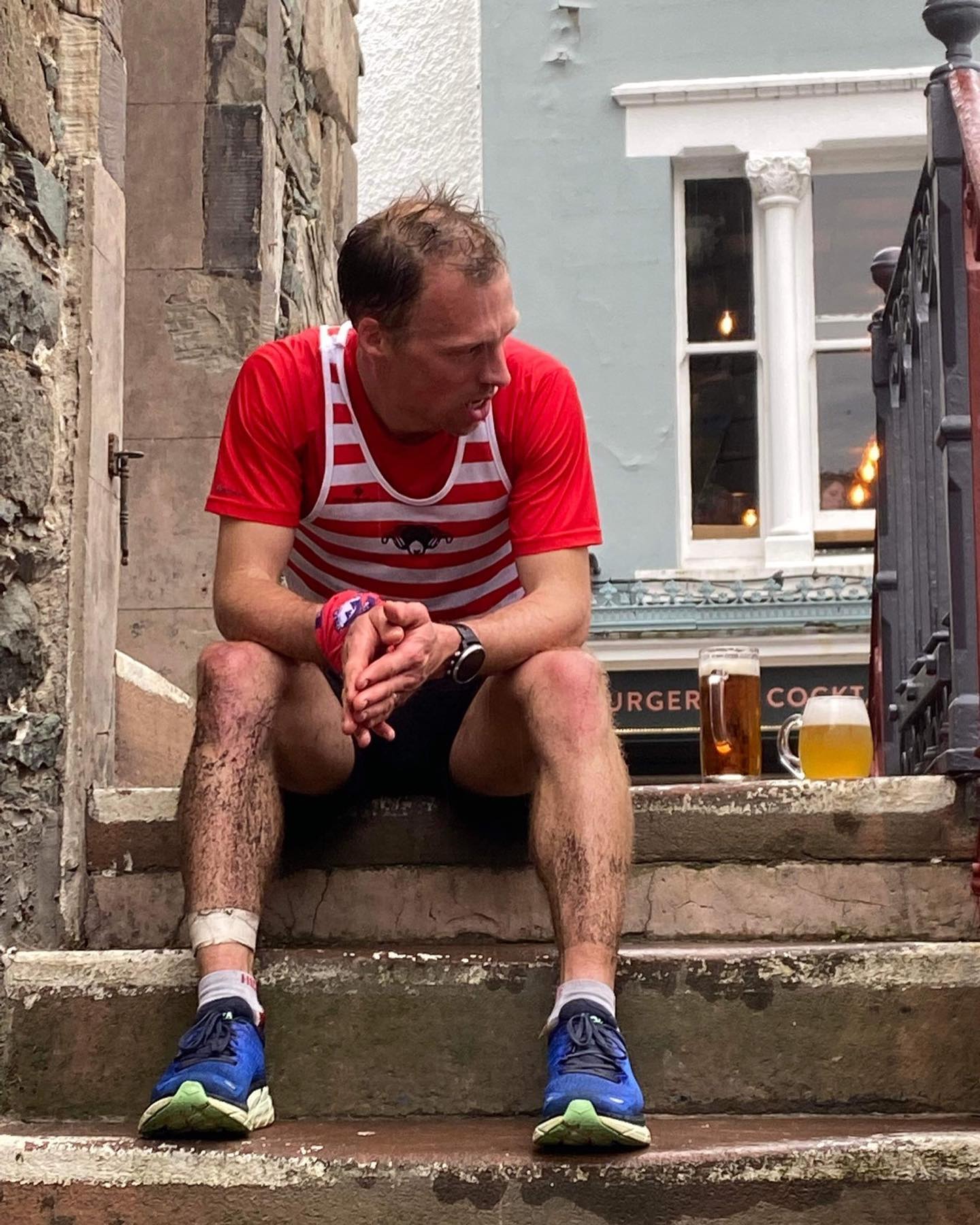 Whilst all this was going on, Ed Hyland, supported by a host of experienced club runners was taking a shot at his first Bob Graham Round – the 66 mile endurance challenge that takes in 42 of the highest peaks in the Lake District. The Bob Graham takes in 27,000 feet of elevation and the aim is to complete the challenge within 24 hours. Ed finished the BGR in an incredible 18 hours and 28 minutes – the second fastest time in club history and so close to the record.

The 58th Fellsman was finally held following a covid induced 2-year hiatus.  This is a 62 mile 13,000ft jaunt through the high and low lands of Yorkshire, starting at Ingleton and finishing at Threshfield.  The route takes the entrants up Ingleborough, down to the Hill Inn and up Whernside ). Other climbs include Gragareth, Great Coumb, Blea Moor, Great Knoutberry, Snaizeholme, Dodd Fell with Great Whernside the final climb of the expedition. 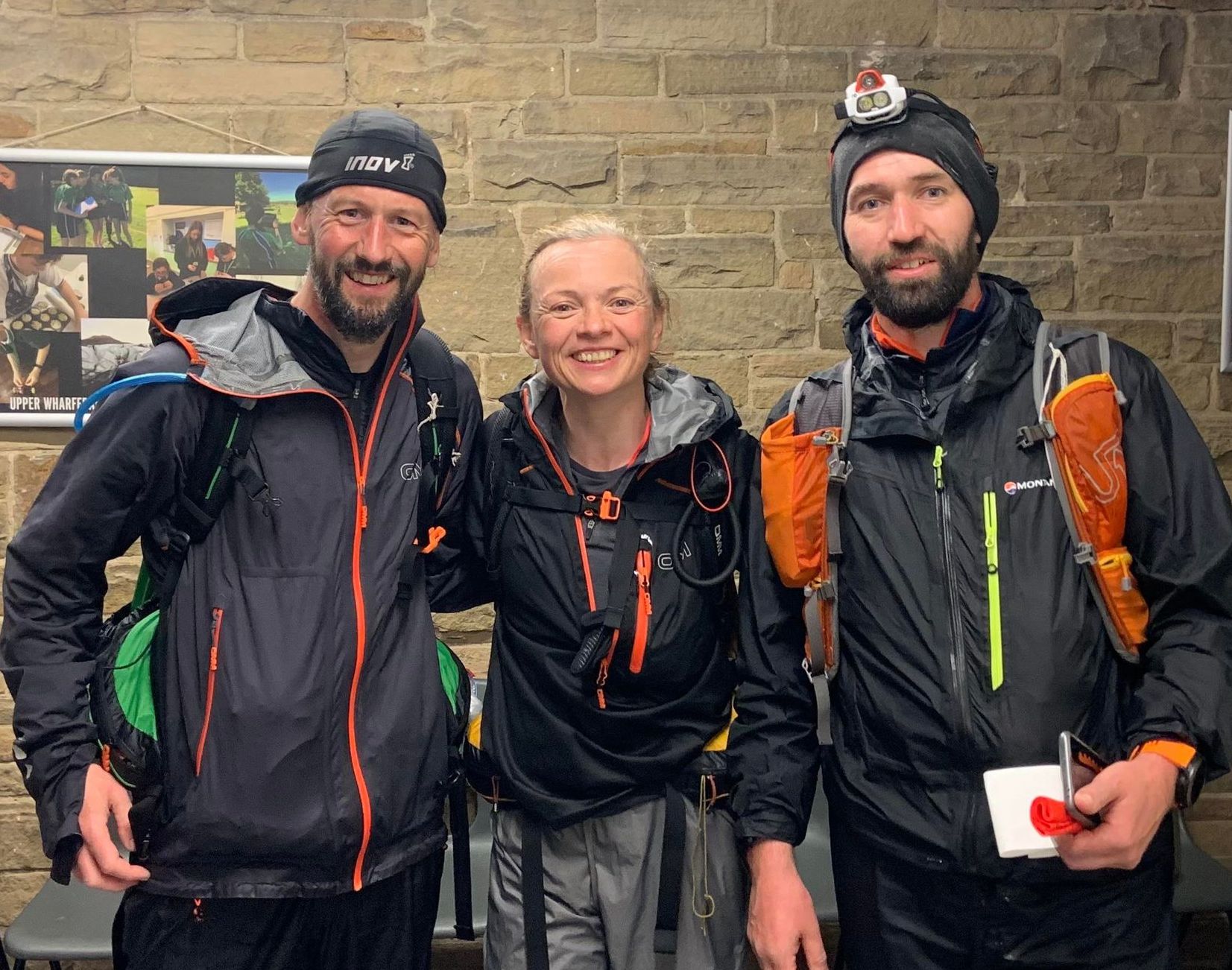 Fiona with her running mates at the Fellsman

This was CVFR member, Fiona Lynch’s third time at the event and each time has been different with weather conditions playing a large part in how progress can be made.  The day started warm clear and dry with good going underfoot due to the dry weeks we have had recently. All was good going until the sun went down over Middle Tounge.  Temperatures plummeted and fog descended limiting visibility to a few meters making navigation over boggy terrain very difficult and slow.  The final push over Great Whernside was not as bad as expected and Fiona crossed the finishing line as 8th lady in a time of 19hrs 57mins.

Whilst club member were challenging themselves on short races, endurance events and mountain marathons, a growing number of club members take to the lakes for the Great Lakeland 3 Day event. This was the first time the event has been on since 2019 and the enthusiasm for multi-day endurance events seems to have grown in that time. The event takes place over three days with competitors choosing their route each day from a ‘short’ café route (20+ km) up to an expert route (40km) and camping overnight camp for all competitors.