It was a blustery evening in Haworth for the return of the Bunny Runs on Tuesday the 5th April, having last been run in 2019.  Famous for it’s bountiful of chocolate prizes 163 Juniors and Seniors set off on the 2.7 mile circuit around Penistone Hill.  It was the first in a series of 4 races held over the same course on consecutive weeks around Easter.

Overall winner of the night was Jack Cummings of Ilkley Harriers in a time of 15.52, with Rebecca Flaherty of Bingley going on to claim the overall ladies title in a time of 17.28 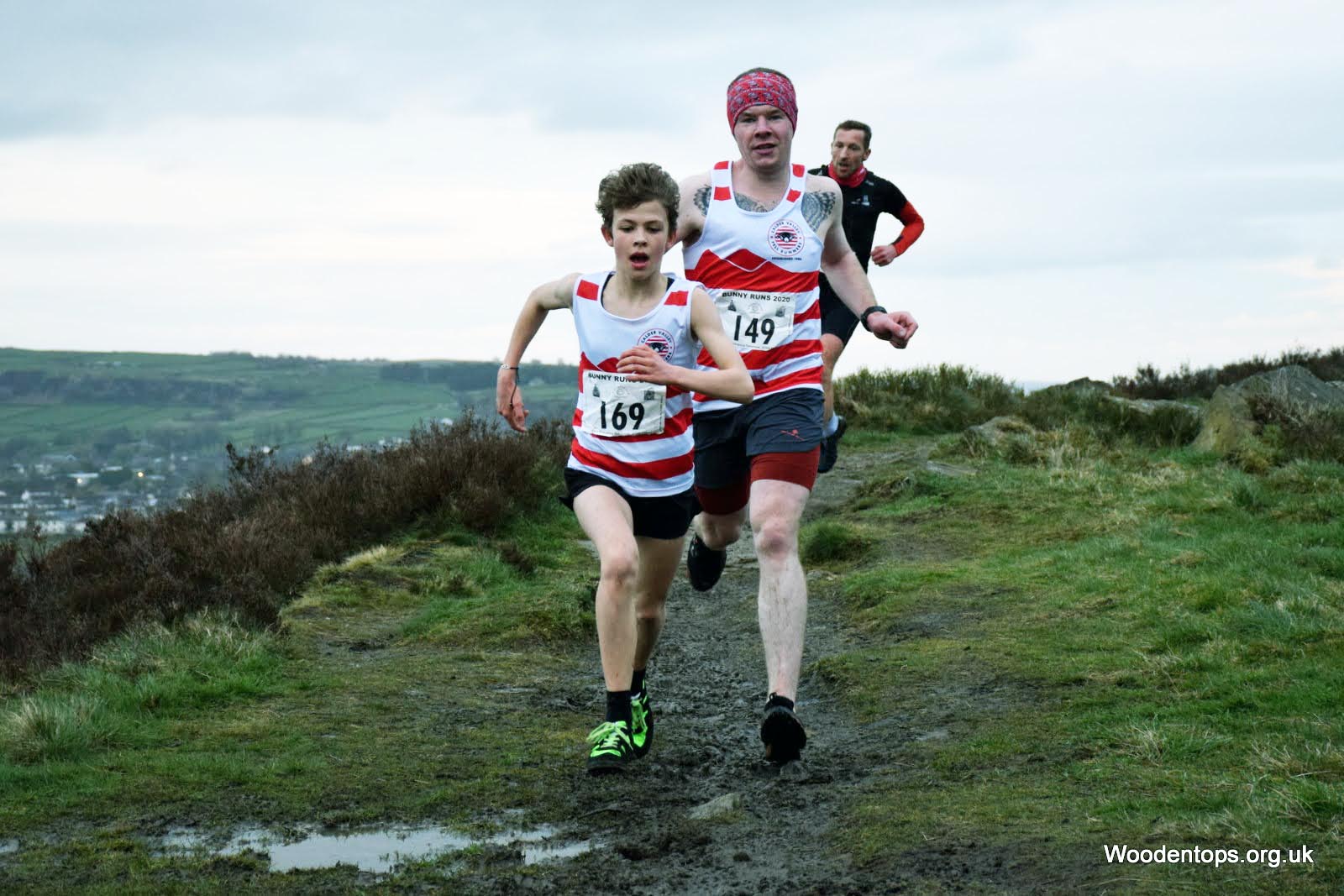 Calder Valley Fell Runners’ juniors trounced the seniors on the night.  Despite only turning 12 on 1st April, Calder Valley’s Clara McKee is no April fool. She was 3rd lady behind Rebecca Flaherty and under 17 Amelie Lane of Wharfedale. There’s no under 13 classification at the Bunny Run so she was in the under 15s. It makes her run absolutely amazing. Her brother Thomas had a fabulous run coming 3rd under 15 and only a few seconds behind Elijah Peers Webb who is an under 19. Wynn Standish said he had his best race result ever. 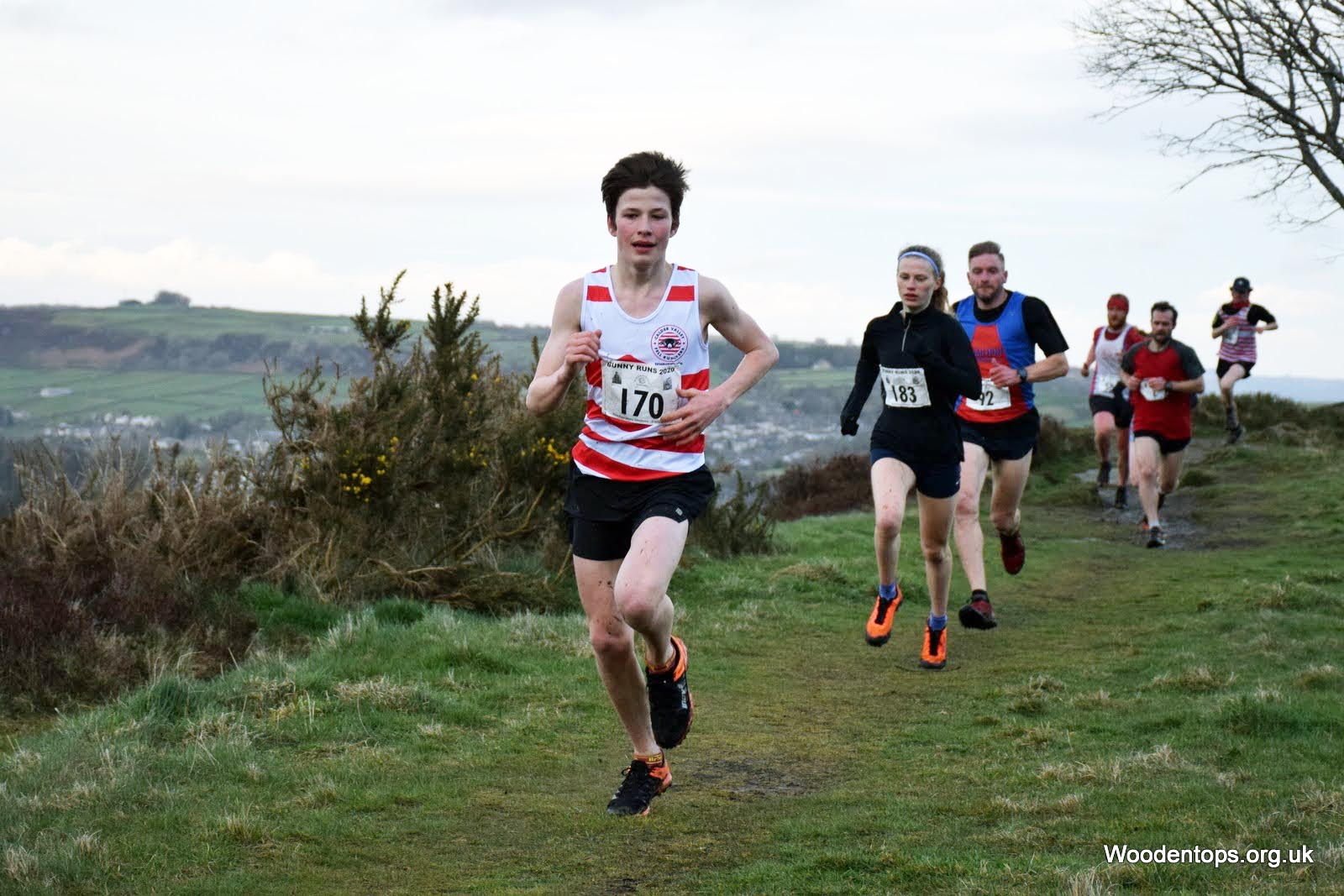 Thomas running hard to the end

Must have been the mash potatoes that Trudi (Clara and Thomas’s mum) cooked before the race.  This family surely must be in contention for the fastest family prize at the Bunny Run Relay on the 26th April. 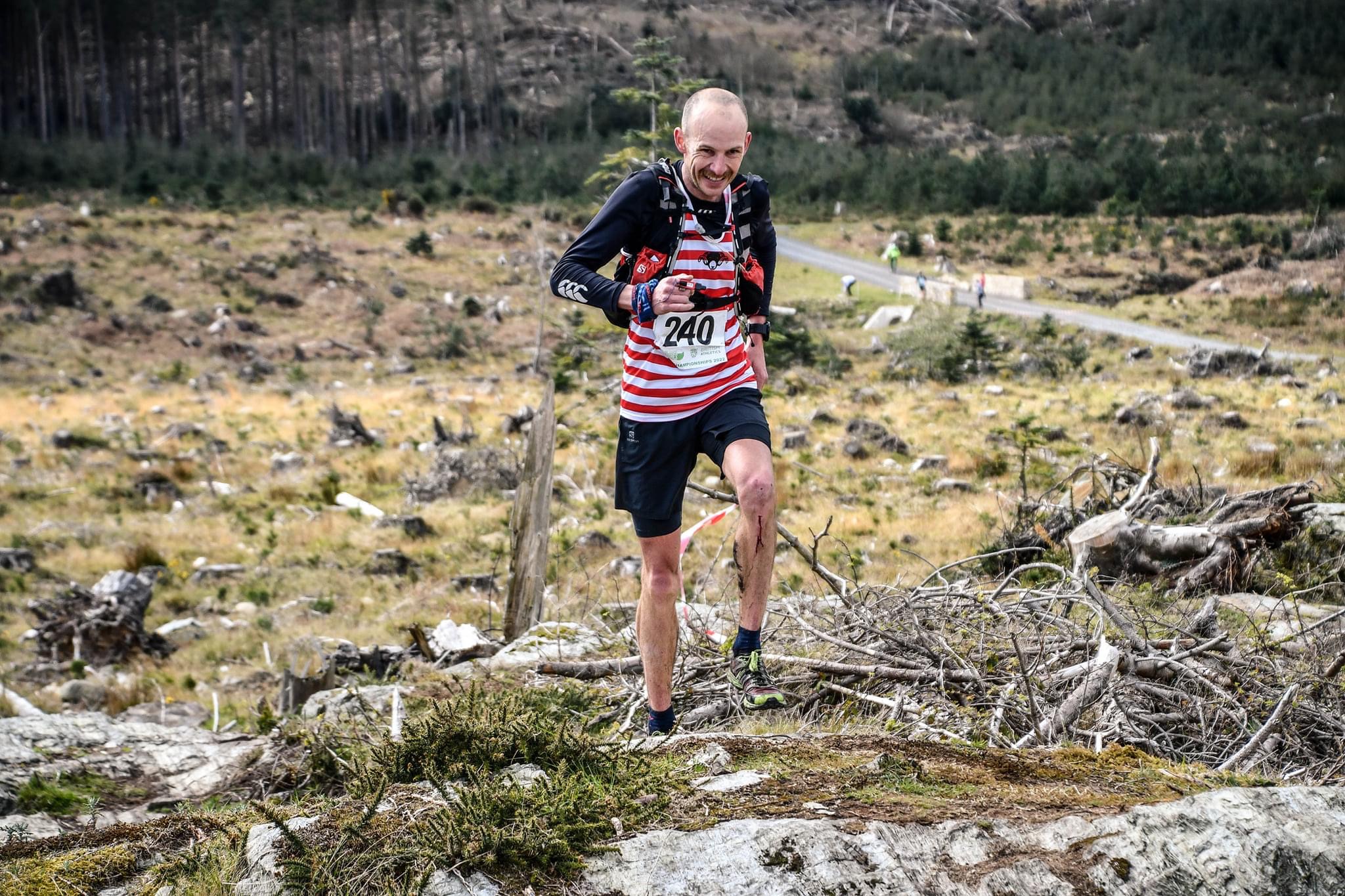 The first race in this year’s British Fell Running Championship was held in Northern Island last Saturday, the Mourne Severn Severns.  It is a classic long race getting its name because it takes in the seven highest peaks over 700m in the Mourne Mountain range.  The 19 mile long route opens up the delights of this granite mountain range; from the monolithic rocks on the Binnian plateau, to Slieve Bearnagh’s angular rocky tors guarded by steep faces, to the more mellow grassy slopes of Commedagh.

Calder Valley’s Gavin Roberts had a superb run, working solidly through the race to finish in 4th place overall in a time on 3 hours 46 minutes and 26 seconds.  U23 Charlie Parkinson was the only other CVFR to run but unfortunately had to retire two thirds of the way through the race.

Last Saturday was the Wardle Skyline fell race, a 7 mile run around the moors tops above Watergrove Reservoir. With most of the 1,250ft of climbing in the first half of the route together with most of the mud this race could be described as a race of two halves. Starting at Wardle Main Square you run up a cobbled street and then it’s a short path round the reservoir before you hit the moor and start the long climb to the top of the moor. If you have the opportunity there are some stunning views especially on a sunny day like Saturday was.  At the top of the moor you run on a gravel track alongside the windmills to the halfway checkpoint where you hand in your token to a marshal and begin the long descent back to Wardle. The long descent is mainly trail and you can get a fast pace going here. The race ends near where it started opposite the main square.

Calder Valley Fell Runners had 7 men and 2 women in the race. Andy Worster finished a fine 2nd place in one of his first races back since injury. Not far behind was Andy Ford in 5th and 1st V40 with James Logue picking up 1st V50. Calder Valley men took the team prize. Other results are…to be confirmed… with 183 runners completing. A good day out for everyone and a good race run and organised by Rochdale Harriers. 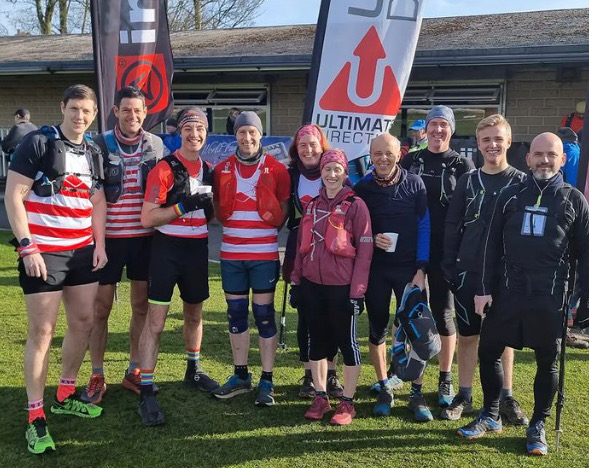 Some of the Calderdale Hike runners at the start

A counter in Calder Valley Fell Runners Ultra championships, the Calderdale Hike is an epic 37-mile tour around the local moors, hills and valleys, starting at Sowerby Crickey Club.  There are actually three distances to choose from, a new ‘very short’ route with 16 miles and 2805ft climb, a medium route of 26 miles with 3195ft of climb and the long route of 37 miles with a beastly 6234ft of climb.  It’s a very well organised event, arranged by St. Pauls Scouts of Sowerby Bridge and is also part of the national Ultra Running Championship, Runfurther.

Gill Dickson entered the long 37 mile route and said “I can’t run that sort of distance on my own and the only other Calder Valley lady up for the challenge was club captain, Carolyn Shimwell, so we made a pact to run together. Neither of us had done much long distance training and we were both relying on residual mileage in our legs from longer runs last year. We were blessed with great weather although we did have a bit of unexpected sleet and frozen fingers half way round.

We made good progress and had covered half the route in 4 and ¼ hours. Then we made the error of assuming we would do a similar time for the second half!  Not to be. We got stuck in a time warp. Not in the Bermuda Triangle of the moors above Watergrove reservoir where the wind farm is, but on the section from Littleborough to White House. The only bit we hadn’t reccied.  We floundered a bit there and it took us a while to pick up the route again by which time we’d lost loads of time. But the brew at the White House made it all okay and we were able to push on. Despite Carolyn suffering back pain, we persevered and finally made it back to the cricket club 9.43 hours later. Tired but happy and elated that we’d managed to finish. It certainly was a grand day out!” 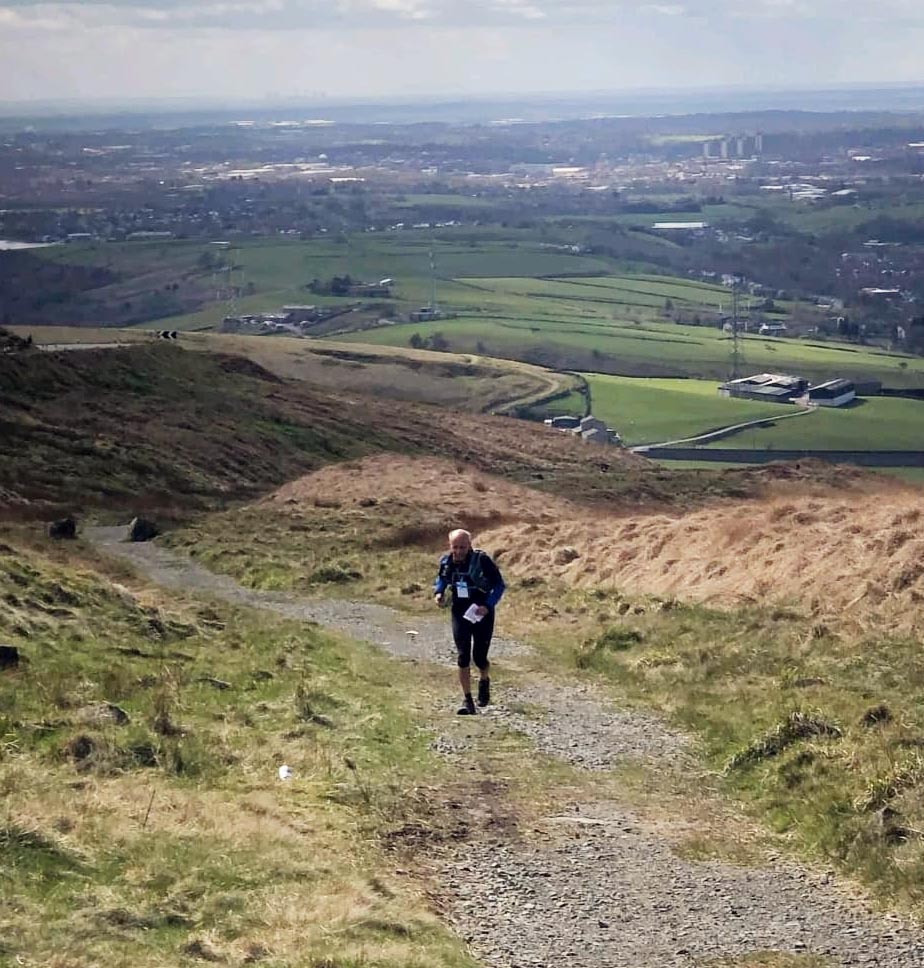 Bill running strongly towards the Whitehouse

In the long route Kev Hoult took first place and in his own words ‘It was a surprising win but I felt strong throughout and I was actually pleased when it started hailing as I was getting too warm!’ A fantastic 6th place for Luke Meleschko, Paul Haigh 8th and Bill Johnson 10th rouned off a very competitive start to clubs ultra championships.

It was Garry Bradwell’s first run out for CVFR. He was made to feel very welcome and remarked that it was great to see an excellent turnout from the club members. He ran the 26-mile route and ended up coming second overall so was very pleased to play his part in the club’s success across the board.

Gary described his race “I’d recced the route and identified a few areas I could run some different lines, one of which certainly paid off, where I went into checkpoint 3 at Lumbutts Church in 4th place and following a direct line up to Warland Reservoir, I hit the reservoir just ahead of the lead runner and enjoyed leading the race for all of 30 seconds before he came past me. I went in checkpoint 4 at the Whitehouse joint 2nd in a pack of 3 but ran a strongly up past the Blackstone Edge trig point and beyond over to Windy Hill (checkpoint 5). I’d put about 5 minutes between the two chasing me at this point. The race leader crossed me on his return over the m62.

I had a pretty comfortable and enjoyable descent down to Ryburn Reservoir and along the river until the cheeky climb out of Ripponden but once I’d managed to escape the sloped bog below Bank Hall Farm and hurdle the 3 road closed fences on the descent from the final checkpoint I knew the end was nigh….but there was a final sting in the tail….For all those who ran the 26 /36 mile route, there is a cheeky the final half mile or so was up the steps and cobbles back up to the cricket club at Sowerby.

I literally scratched my way up the walls and dragged myself up the rail whist looking over my shoulder hoping nobody wanted to challenge me to the top and steal 2nd place off me.  I was genuinely empty after this but was greeted at the finish by the superbly enthusiastic and helpful Cub Scout offering me all the food I could wish for.”