It has been an unusually quiet fell racing week for the club but there has been plenty of action on the trails along with cross country racing by the club’s junior athletes.

A golden double for Clara 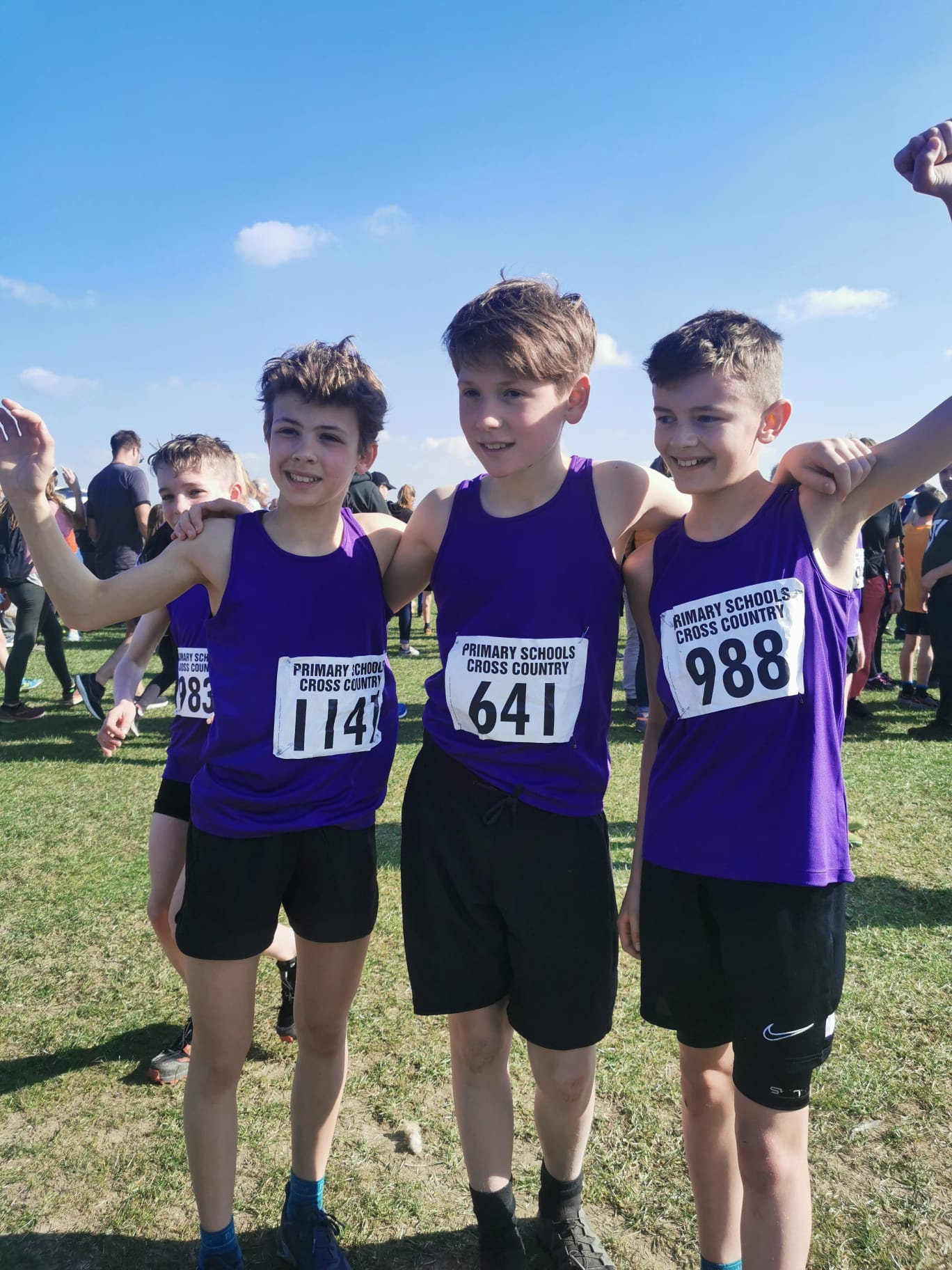 Calder Valley juniors had three runners that made it through three rounds of qualifications –  schools, district and county – to represent Team West Yorkshire at the 2022 English National Schools Cross Country Championships. The event was held at the Market Harborough show ground in Leicestershire on a surprisingly warm Saturday afternoon. The course was flat and dry and made for a very fast and competitive race against some of the best runners in the country and with a very strong line up in each race.

First to run (2.7km) was Year 6 Boy, Harry Cliff, who ran faster than at his local park run and averaged 6 minute miles, representing Riverside School and team West Yorkshire. He finished a strong 65th out of 138 with an excellent time of 10min 5secs. As the 8th placed ‘counter’, Harry helped West Yorkshire pick up the boys’ team gold. 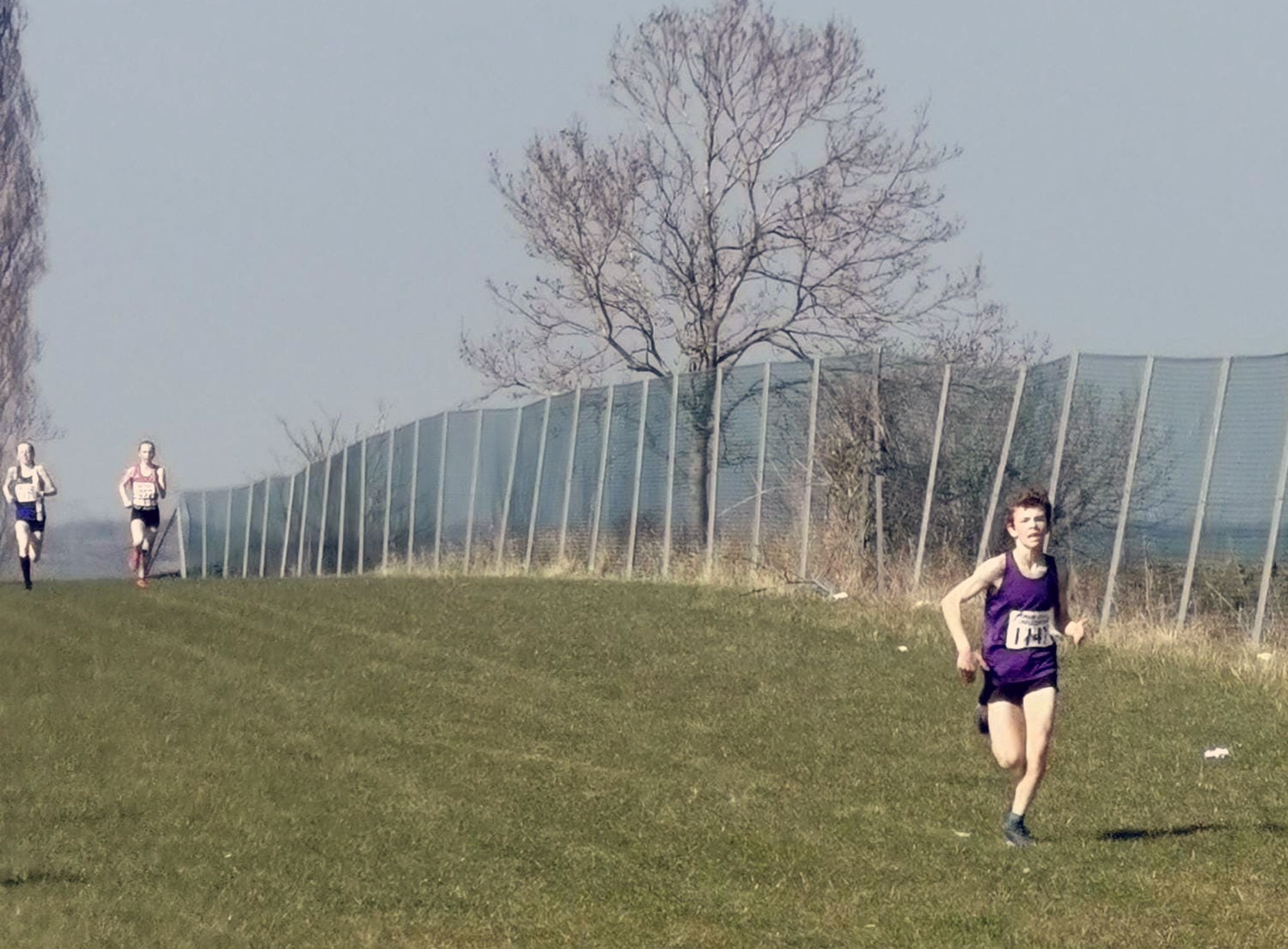 Clara well in the lead to take gold

Second to run (3km) was Clara McKee, Year 7 Girl representing Calder High School and Team West Yorkshire. Clara finished very comfortably in first place to win gold with an amazing time of 10min 40sec. She also added to her individual gold medal by picking up girls’ team gold for West Yorkshire. Earlier in the week it was doubtful that Clara would be running at all as a sore knee nearly kept her out of the competition.

Last but not least to run (3km) was Joseph Stone, Year 7 Boy representing Ryburn Valley High School and Team West Yorkshire, finishing a strong 28th out of 115 with an excellent time of 10mins 49secs. Joseph was 3rd counter in his race for the West Yorkshire Team who later, after some confusion with the results, had secured Team Silver.

It was a privilege and an emotional time for all the parents watching their children run so well for their county. They are still on a high by all accounts and one of the parents said it was one of the best days racing they’d watched. 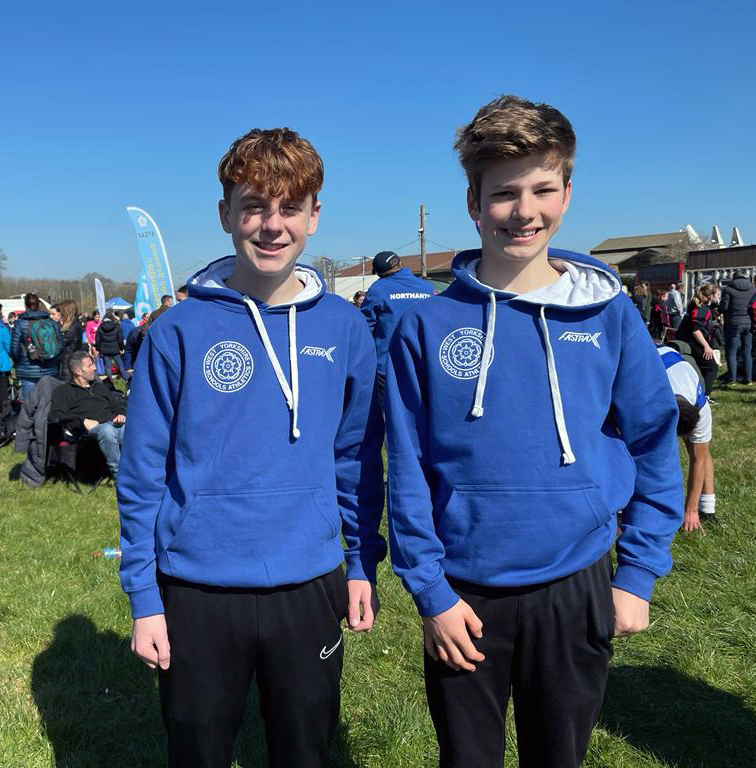 The weekend before had been the turn of the secondary schools with two of CVFR juniors representing West Yorkshire. It was a lovely sunny day with not a cloud in the sky nor a hill in sight. The race was held way down south in Kent on a very flat fast course. Euan Logue, Year 10/11, ran well representing Todmorden High School. He covered the 5.75km in a time of 23mins 29secs. Thomas McKee, representing Calder High in year 8/9, showed amazing determination as he unfortunately had the back of his fell shoe clipped by spikes at the start and had to run with his shoe half off for the whole race which resulted in them falling off twice. Despite the challenge it was a great experience, with Thomas finishing midfield covering the 4.34km in 15mins 16secs. Both lads really enjoyed representing their county. 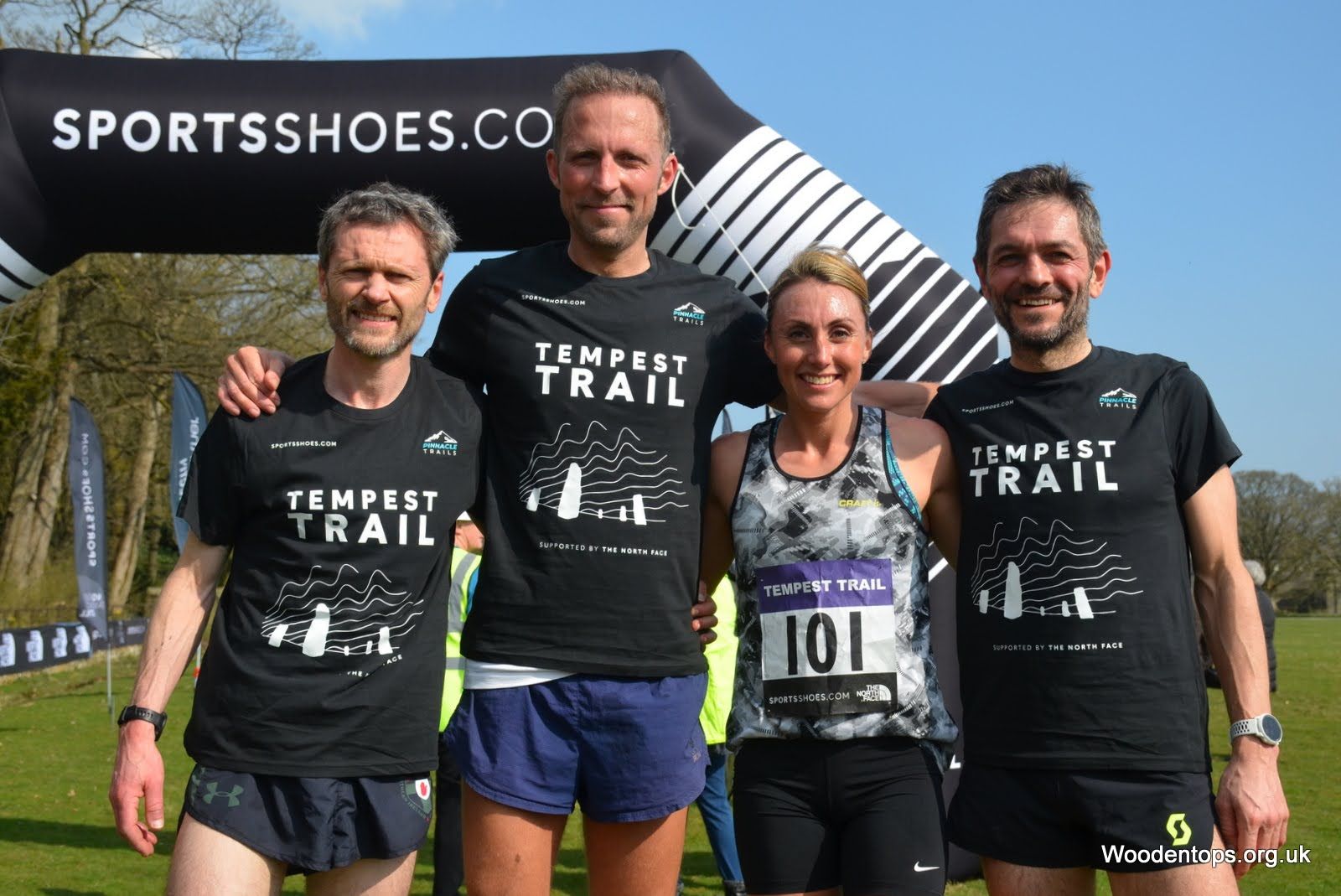 The winning line up of Gav, Tom, Helen and Karl

This is a short, competitive trail race organised by club veteran Ben Mounsey aimed at attracting some of the top fell and cross-country athletes for a 5-mile romp through the woodlands and trails of Broughton Hall, near Skipton.

The weather, atmosphere and course were, in the words of Calder Valley’s Gav Mulholland ‘super, smashing, nice’! The race itself was run at a fast pace and led by Ribble Valley’s Tom Corrigan from the start with the field spreading out quite quickly within the first mile. 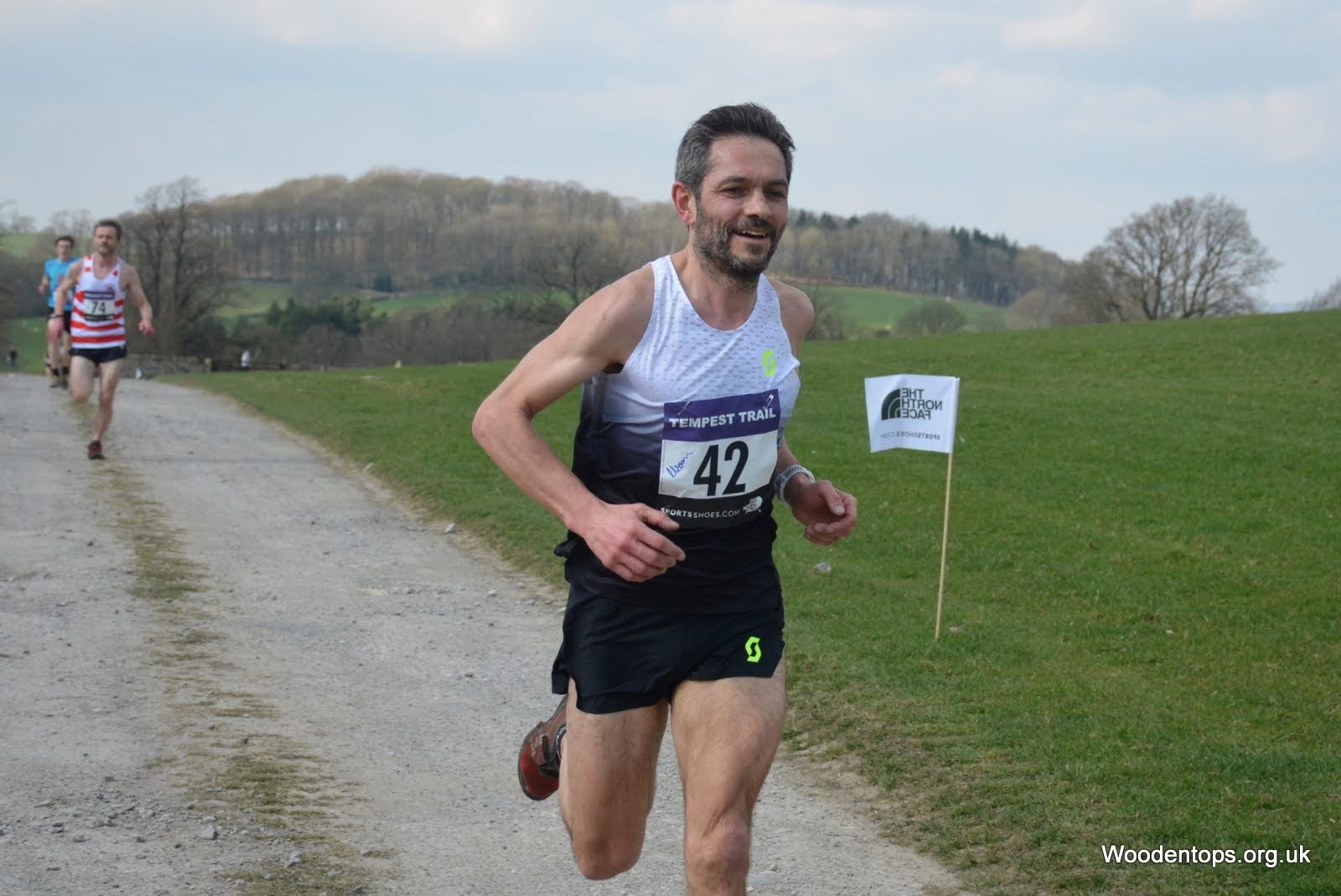 CVFR club mate Karl Gray described the course as flat and fast and more suited to road runners than fell specialists but he put in a pretty good shift all the same. Having tried unsuccessfully to stay with eventual winner Tom for the first half of the race, he spent the second half making sure Gav Mulholland didn’t catch him.

Karl and Gav settled into second and third spots and despite sore legs from the previous week’s Heptonstall Fell Race, Gray did manage to hold off Mulholland to claim 2nd overall and 1st v50 with Mulholland coming in 3rd and 2nd v50 to claim two podium places for the club. 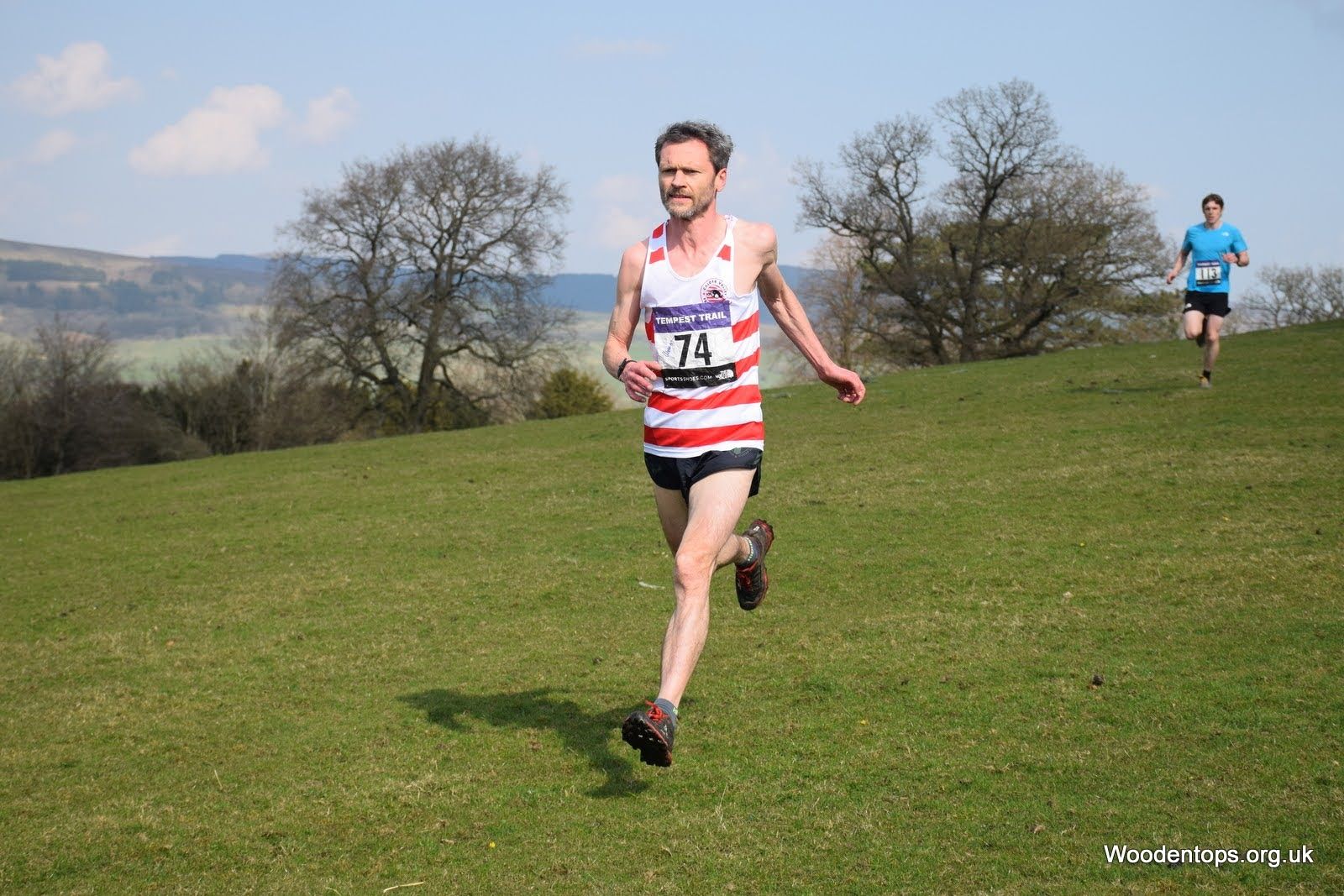 Gav in fine form on his way to the finish

This was a good meandering 5-miler and, in Gav Mulholland’s words ‘a great race, recommended for anyone who wants a gentle transition to cross-country or trail’.

With many of fellow club members taking advantage of the good weather to chase the trails or recce race routes for later in the season, Bill Johnson was notable for getting out there and getting racing, albeit in the gentle surroundings of south Cheshire. Mow Cop hill race is 6.5 miles with 1250′ ascent. It’s a good route with two climbs., dry conditions underfoot and very well marked and marshalled. The race was dominated by two lead two runners who set a fierce pace and quickly distanced themselves from the rest of the pack. A chasing group developed and Bill worked his way to the front of that group. With no chance of catching the leading two, the chasing pack splintered, leaving Bill to run much of the race very much on his own to claim third place, and first MV50, in a time of 52mins 35secs.

This is a race that has been going for 10 years but with few Calder Valley runners venturing so far south it isn’t on many club member’s race radar. Watch out, Mow Cop could be a strong contender for next year’s club championships.