The last week of the school holidays has been a busy one for some of our red & white hoops, who have been in fine racing form. Showing us all that age really is just a number, veteran runner Darren Kay not only won his V50 age category in the Shipman Knotts race in Kentmere on Tuesday 24th August, but also took first place outright. This was the first time Kay had competed in this 3.7-mile/6-km race, with its 1312-feet/400m of climb, so he was understandably ‘delighted’ with the result. He also saw this A/S category race as ‘a good workout’ for the main event of the week: the 4.5-mile/7.2-km Black Combe Dash fell race on Saturday 28th. 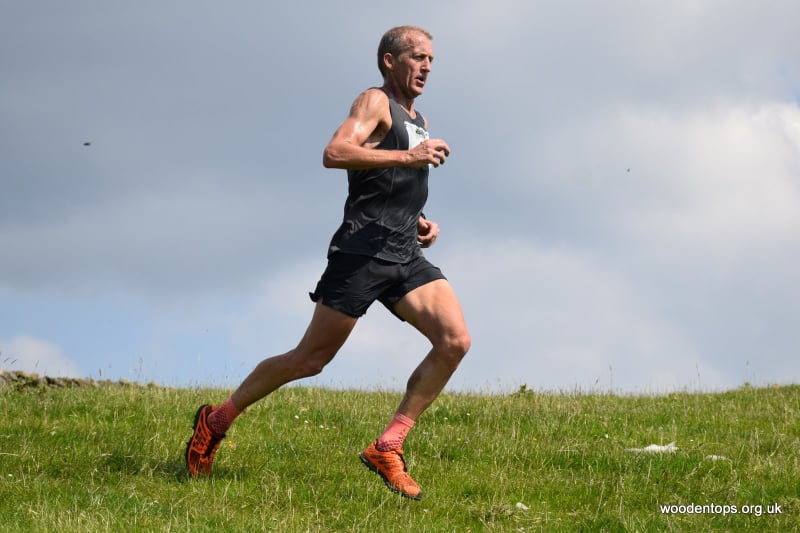 As the penultimate race in this year’s English champs, the 2021 Black Combe fell race was made even more interesting by the absence of certain key runners, meaning more of the top spots up for grabs. The course maybe relatively short, but it still packs a punch, with an energy-sapping 600 metres (1968ff) of ascent over spongy ground in the first 3.5km and the last 4km a quick dash on trails and track to the finish.

Getting ‘somewhat carried away’, Kay led this hotly contested race out the blocks, setting off maybe a little too swiftly. He then settled in for the long climb to the summit, which he rounded in 9th place, before giving it ‘everything’ on the descent to finish in 41:47 seconds. This amazing feat saw Kay take first place in not only the MV50 & MV45 races but also second in MV40 category, only beaten to the line by fell running legend Robert Jebb.

Overall, in the open (non-veteran) men’s race, Kay finished seventh – an important result, given that this was a critical race for the CVFR men’s team. Going into the event, champs’ favourites, Keswick, led the team competition, with only Blackcombe & one further race left. To close the gap, Calder needed a win. But, as expected, Keswick did not make this task anything like a walk (or race) in the park.

The CVFR men battled hard, with Andrew Worster’s finish first for the valley, in fifth place overall in 41:41. With Kay just pipped to the line for 6th by Keswick’s Mark Lamb, the remaining two spots of the four for the team result were filled by an outstanding performance from Calder Valley’s Adam Osborne and another solid run by Martin Howard. Osborne, running this route for the first time in five years, rues taking a slightly different line than Kay down from the top, but still crossed the finish line in 42:38 to take a very respectable 12th place. A staggering performance from Howard on the descent saw him win back several places to finish 17th overall in 43:19, & an impressive third in the under-23 race.

Nonetheless, this sterling performance was not quite enough to beat an incredibly strong Keswick team, who took the race team win by a mere two points, scoring 39 to CVFR’s 41. With five runners to count though for championships points CVFR took full points to pull them closer to Keswick.

With only one race left, the men need to win in the last race in the series to level with Keswick, & only taking the first nine places outright in the final race of the championships would prevent Keswick from taking either the gold or the joint gold medal. All eyes are now on this final race at South Mynd in two weeks’ time.

The vets’ competitions, however, is a different story. Here, the red & white hoops easily took the Black Combe win in all three veteran categories. In the MV40, Kay’s second place & Osbourne’s 3rd were completed by Matthew Roberts’ & Karl Gray – whose race to the line meant only 8 seconds separated them, as 5th & 6th in MV40 vets’ race, in 43:35 and 43:43 respectively. In the MV45 & MV50, Gavin Mulholland (44:53) completed the set to make it first, second & third for Calder Valley Fell Runners, who pull even further away from the rest of the pack. 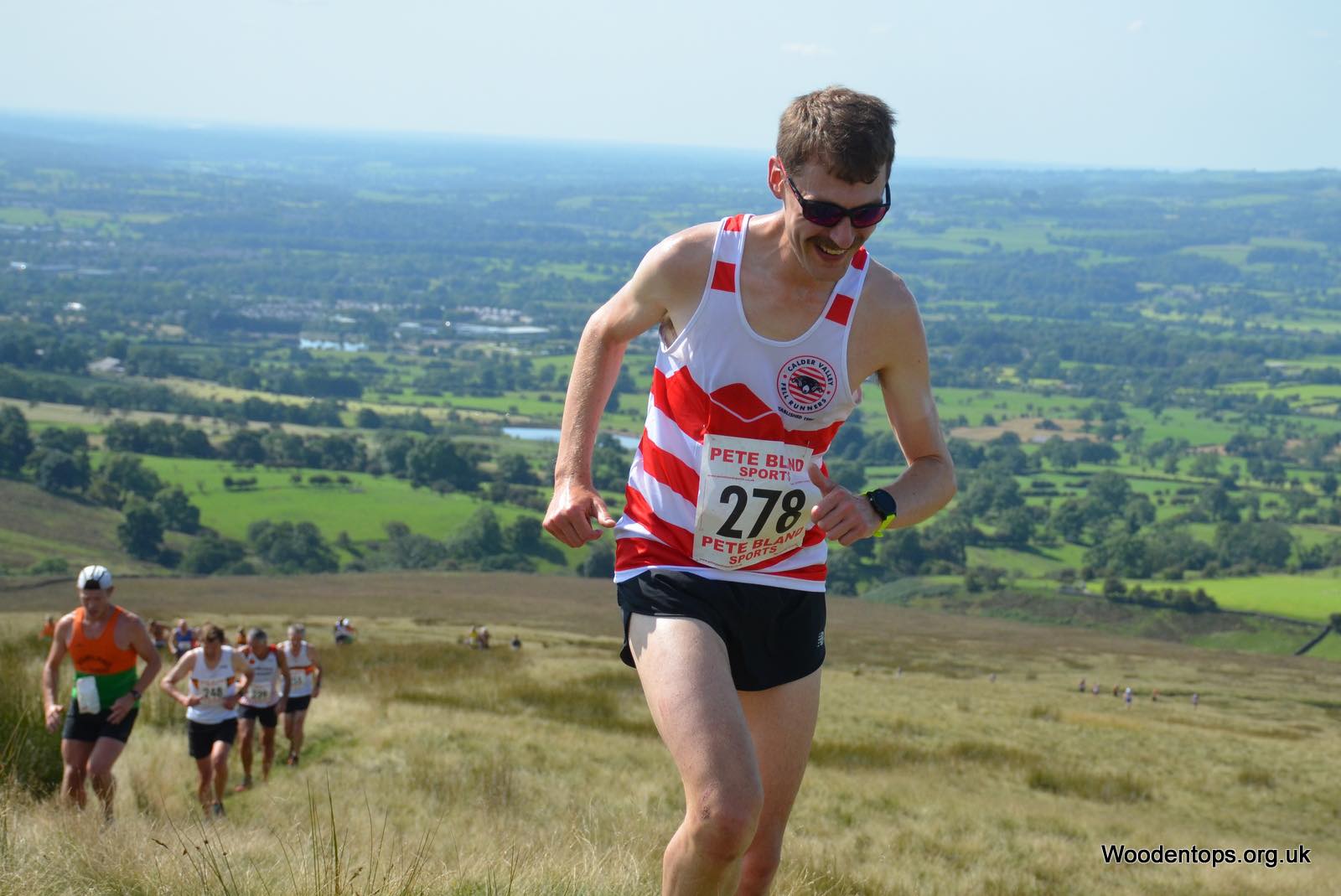 With so many runners involved in the English championships, it was relatively quiet elsewhere over the weekend. So much so, that newer club member George Kettlewell found himself flying the flag solo for CVFR at Clayton Le Moor’s Pendleton fell race on Saturday 28th. This five-mile category A race which packs a punch with its 1499 feet of climb – was also part of the Fell Running Association’s 50 at 50 celebrations (carried over due to COVID).

Kettlewell commented on what a lovely spot & day it was for a race. As his first ever category A race, he was delighted with his performance in the ascent over rough & tussocky terrain. Nonetheless, as yet, he recognizes he lacks the skill (or maybe ‘the bottle’) of more experienced runners on the descent (losing 10 places). Kettlewell, who still finished a very credible 28th overall, in a shave over 50 minutes, was quick to highlight how much he is ‘loving trying new things & being part of a club’. He’s keen to get out & improve on his downhill before his next race. 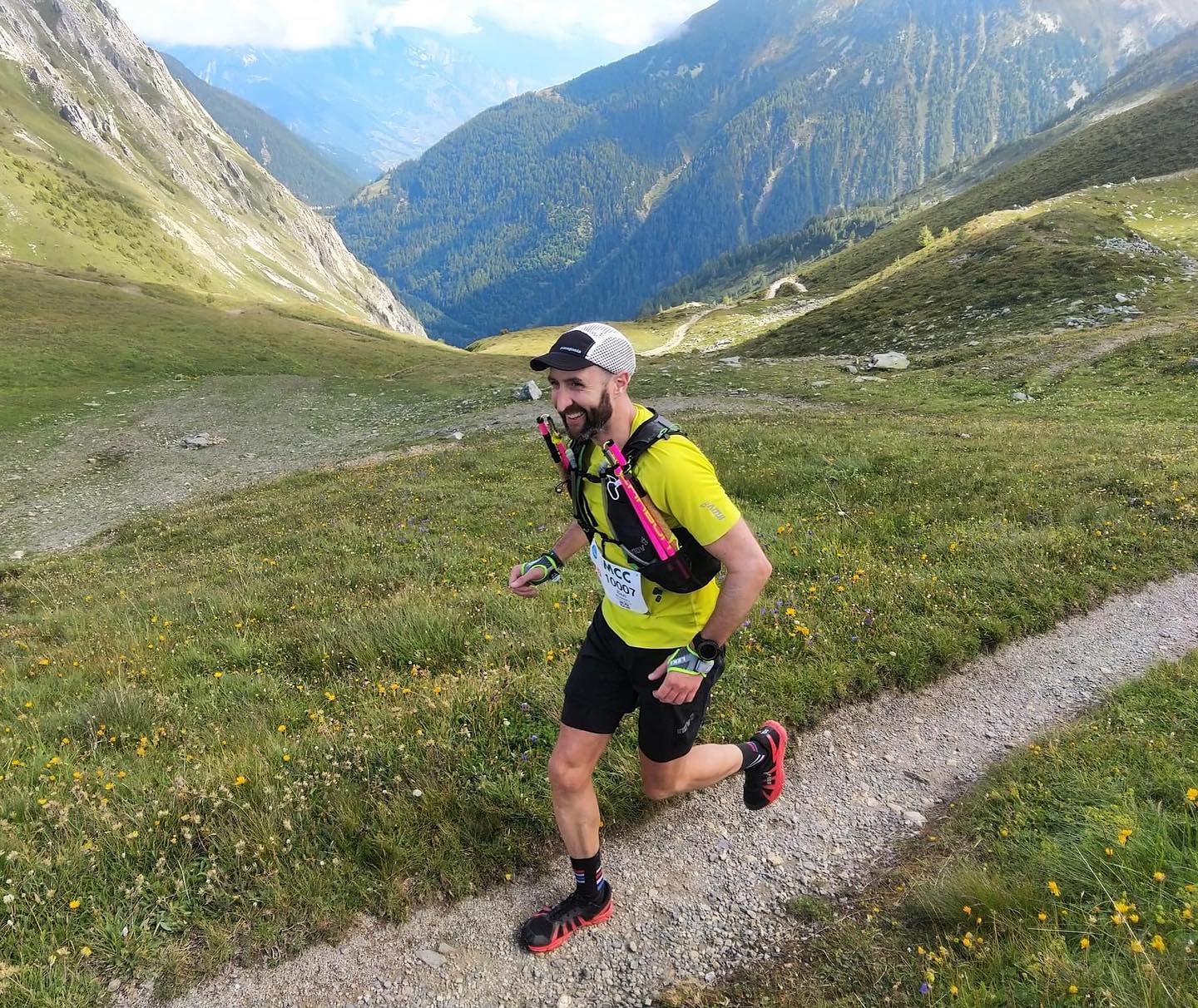 Further afield, Calder Valley’s Ben Mounsey celebrated his 40th in style, by competing at the 40km (2500 meters of ascent) Martigne-Combe (MCC) race in Chamonix, France (part of the Ultra Trail du Mont Blanc – UTMB series) on Monday 23rd August. This was, in Mounsey’s own words, ‘a big step up’ for the international runner – not only in distance, but also in climb.

Mounsey admits he found the added distance & ascent ‘tough going’, describing the final 10km as ‘an absolute sufferfest’. However, the view of Mont Blanc as the team descended into Col de Balm more than made up for the sweat & tears!  Overall, Mounsey found it ‘a fabulous race and experience’ & was pleased, as a relative novice to racing such distances with all the necessary kit (including running poles), to finish 19th overall (& 3rd vet).