Duncan Thompson, of Calder Valley Fell Runners, passed away unexpectedly last autumn. He was proud to be a member of the Club. Some may remember him as the organiser of the original Boulsworth Fell Race, with its challenging finish! Below, two founding members of CVFR, and close friends, share their memories. 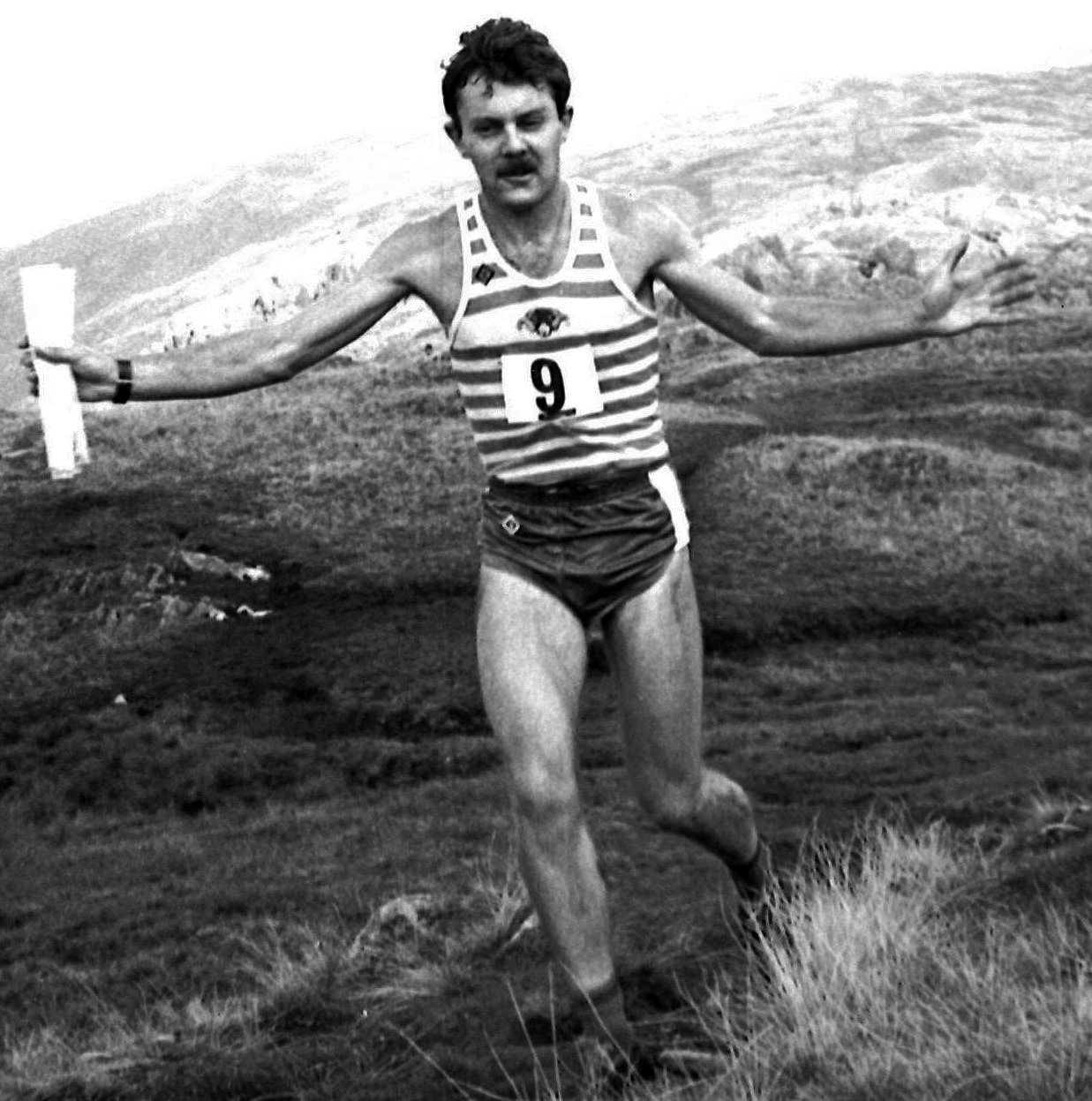 The Best Man by Gary Webb.

My first memory of Duncan Thompson was meeting him in the Cross Inn in Heptonstall in 1987. I cannot even remember why I was in the pub but I remember spotting an obvious runner wearing a Red Rose T-shirt and he spotted me wearing a Chew Valley Skyline T-shirt. Being a proud Yorkshire man I suggested that he join a real club from the right side and told him about our newly formed club, Calder Valley Fell Runners. The rest, as they say, is history and Duncan began to come down to training sessions on a Tuesday evenings at Mytholmroyd Community Centre.

It was obvious from the beginning that Duncan had real class as a runner. He was not a good timekeeper however and the journey over from Nelson often resulted in him chasing round the Calder Valley trying to find where the Fell Runners had gone! It was not unusual to completely miss Duncan until the Shoulder of Mutton pub after training. To be fair, if he couldn’t find us he would train on his own before meeting us for a pint. He liked a pint!

Over the course of the next few Years Duncan became a part of everything that was good about Calder Valley Fell Runners. He was committed to improving his own running as well as bringing on other members of the club with his ideas and thoughts on training methods. He was also a prolific racer who often raced at least once a week throughout the year. In terms of natural ability Duncan could probably have been even better if he had trained more wisely and raced a bit less but, just like drinking beer, Duncan liked a race! 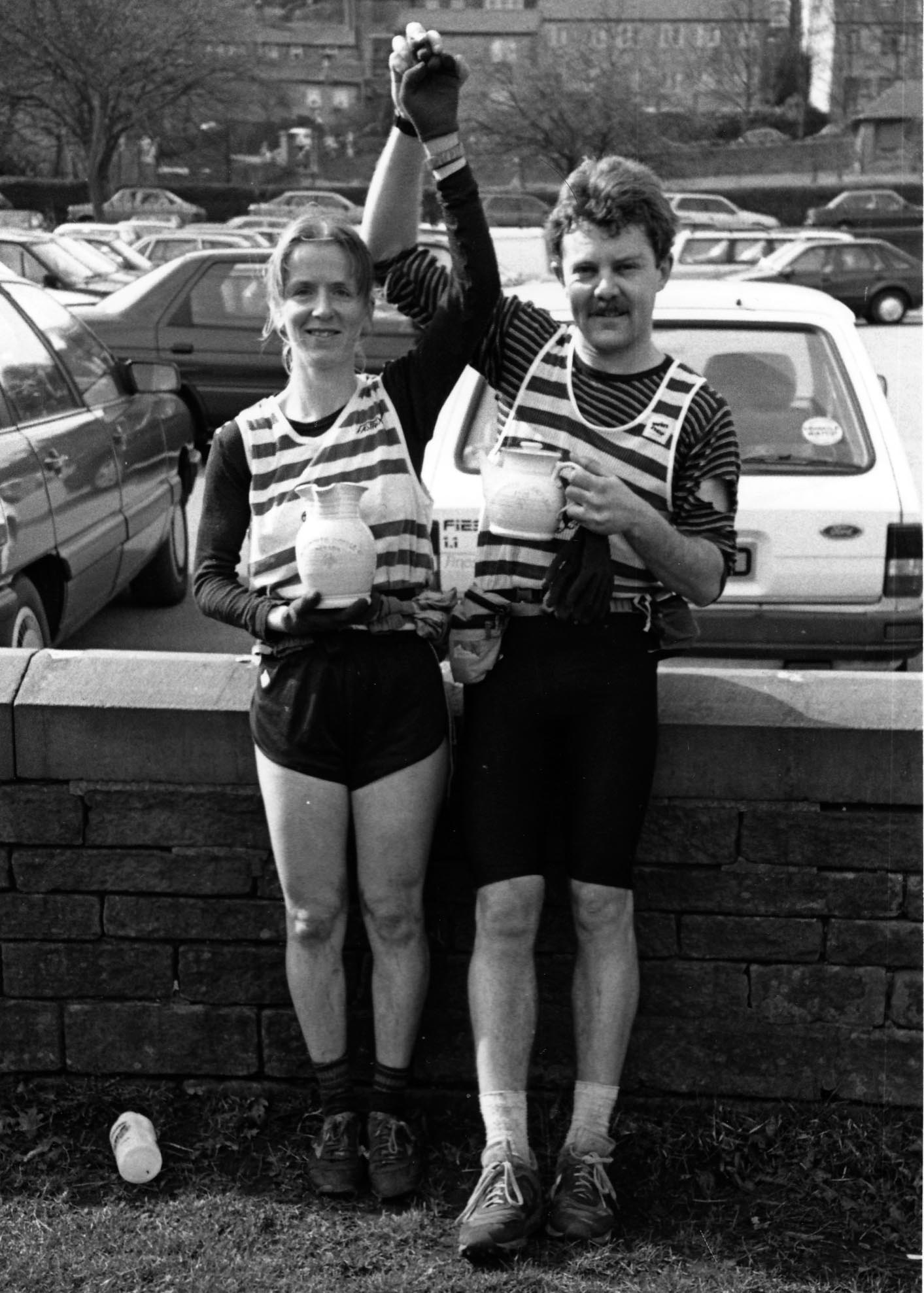 Training sessions were fun but tough as we had a group of runners who would push each other. The camaraderie was superb and we began to turn up to races with a good chance of winning the team prize. I distinctly remember the Great Shunner Fell race where we were 1st, 2nd and 4th. On the descent of this race Duncan came past me at a great rate of knots. I asked him what he was doing and he said he was trying to get a lead on me before the last climb!

On one occasion, at the Old County Tops Fell race, I was paired up with Duncan. We had been up to the Lake District to look at the route in detail over a period of time and soon realised that the hardest part, navigationally, would be off Scafell Pike down Little Narrow Beck Cove to Cockley Beck. In mist this would be difficult. At Scafell Pike on race day we had a lead of over five minutes. At Cockley Beck we were behind by over five minutes! This impacted on me more than Duncan. I was ready to stop; my body didn’t want to continue my mind was playing tricks on me; in short I was pissed off and ready to throw in the towel. Duncan never missed a beat. He never gave up on anything and simply set himself the new target of catching Paul Cleary and Steve Skelton who were now the leaders. I still don’t know how he got me back on track but by the time we were on the Coniston range of fells, we were chasing and motivated. Although we didn’t catch them, we closed the gap and finished second overall.

In 1992, as a club, we attempted to beat the long relay version of The Pennine Way. It was held by Clayton in a time of 41 hours and 29 minutes. In wet and windy conditions we had failed in 1988 so we were keen to have another bash.

As it turned out, it was one of the best, most memorable events that we ever did as a club together with everyone breaking their own course record as well as smashing the Clayton record with a time of 38hrs-09 minutes. The record still stands today.

Duncan was an integral part of the team. He, along with Andy Wimpenny, did the long section from Hardraw in the Yorkshire Dales to Middleton in Teasdale. As this section went into the night they ran hard up Great Shunner Fell at the start of the leg to try and make the most of daylight conditions. They made a small error at Pasture End towards Deepdale Beck but got back on track and beat the current record with a time of 5hours-16minutes.

Duncan was best man at my first wedding; he was my training partner for a number of years after Jeff Winder moved over to Scarborough to be with his family. We travelled to many many races together, trained on Pendle Fell or in the Lake District or Boulsworth hill. He was a great bloke to be around, always upbeat, optimistic competitive but generous with his time for anyone and everyone. Duncan was a one off who suffered bad luck and a variety of serious health problems over the years. Once he was told he could not run any more, he simply re-set his mind to becoming a better cyclist and set new challenges both on a Mountain Bike and on a Road Bike. He never gave up, just like the Chumbawamba song lyrics,

‘He crawled through the mud but he never gave up’

Duncan will be missed by all that knew him. Everyone at Calder Valley Fell Runners now, needs to know that the success of the club is very much down to people like Duncan who really helped to raise the standards. I cannot begin to contemplate how much Duncan is missed by his Mother, his Daughters, his Grandchildren, his brother and his wife Ruth with whom he had such a close and loving bond. Everyone that spent time with Duncan soon realised how special he was.

I know how much he missed running and like to think that he is now back on the Fells, probably with Keith Munton a former friend and training partner, and Greg Houghton, fellow CVFR. The spirit of Duncan will live on, especially whenever there is an event on Pendle Hill which he knew like the back of his hand.

I have many great memories of Duncan – I did the Old Counties Tops with Duncan twice – spent many a happy hour both racing and training with him.  My fondest memory and one which speak volumes of Duncan the man dedicated  to his sport. A  quiet, unselfish modest man. The 1991 Tour of Pendle was held in good weather, this was Duncan’s local race and one he loved. He had the previous year decided to try and win the race . In typical style Duncan told no one of his intentions.  Duncan had set himself  a very difficult  target  which displays the strength of his will. He quietly got on with his training spending many a hour on Pendle sorting out the best line and built up his endurance work but never told anyone his intentions. The day came and Duncan lined up with his own game plan firmly rooted. 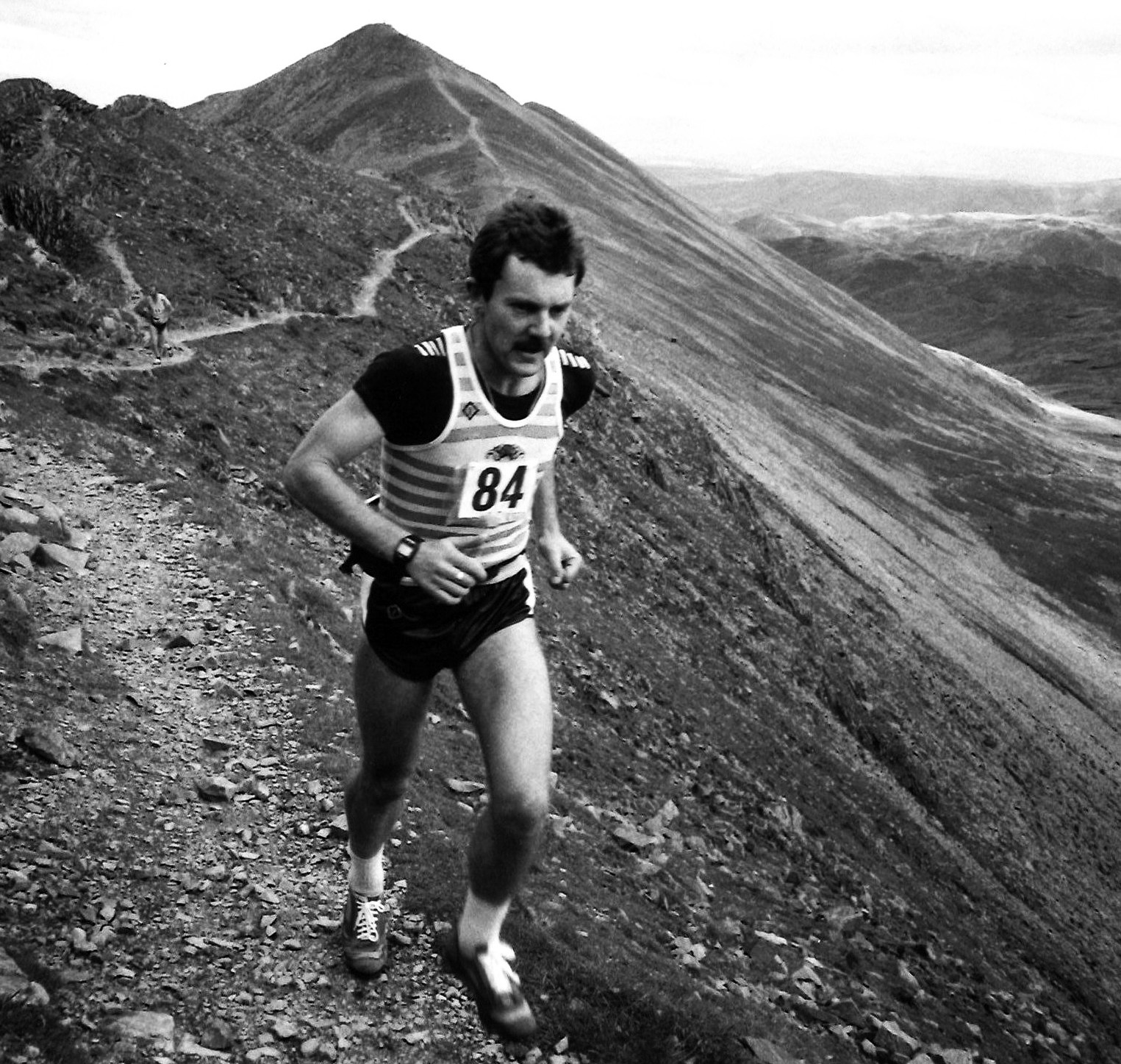 Off we went Duncan to everyone’s surprise shot off like a scalded rabbit quickly gaining one hundred yards. Following Duncan was Scoffer, Tim Laney and I. What is Duncan doing came the question, don’t worry he is going too fast and he will come back to us said Scoffer.

We arrived at the style at the foot of the first climb Duncan was a few hundred yards up the hill on a line off to the right. In retrospect the work he had put in unknown to us at the time was on early display. He’s going well Tim said Scoffer was still convinced his pace was too quick. The race progressed and Duncan kept his lead slowly extending it between check point 1 – 2 and 3.

Our band of three chasing Duncan was  surprised to see Duncan had extended his lead even further as we dropped down to the stream where the Half Tour turned right our check Point 4.

Scoffer shouted he’s not coming back we’d better start chasing, so the race was on, Scoffer chasing followed by Tim and I. Duncan had his head down  and was displaying his dogged determination pushing on hard. It was not until the last climb up Pendle that Duncan was caught. We all came back together  Scoffer caught Duncan near the top of the climb Tim caught him on the run over the moor from the trig. I chased hard but never caught him. Scoffer won in a time of 2 :21:00, Tim’s  time was 2:22:55Hrs, Duncan  in a time of 2:23:11 and I 2:23;18. Duncan while not happy in not  winning  was quietly pleased knowing he gave it all and did his best on the day. If he could have won that day by adopting a steadier tactic earlier on we will never know . He displayed his true character and belief in himself and just went for it. Great memories of our friend Duncan.