Another good contingent of CVFR juniors braved a rather soggy morning to run in the Weets junior fell race at Barnoldswick.

The final stream crossing in the closing straight to the finish proved somewhat tricky to navigate with a fair number of runners coming a cropper over the course of the morning …..but all our juniors negotiated it well.

In the Under 9’s Harry Cliff finished strongly taking a clear victory ahead of some good local runners. Charlotte Cliff had the option of running in a rare Under 7 race but decided that she wanted to run in the bigger field of the U9’s. A great decision as she notched up her first top three girl’s finish and 14th overall.

Our three runners in the Under 11’s also ran very well , all finishing in the top 10 of 30+ strong field; Joseph Stone (5th), Sam Annison (6th) and Ted Parker (10th) – Ted opting part way through that given the conditions he’d be better off racing whilst holding his glasses. On finishing, Sam commented that despite the conditions he very much enjoyed the race!!! 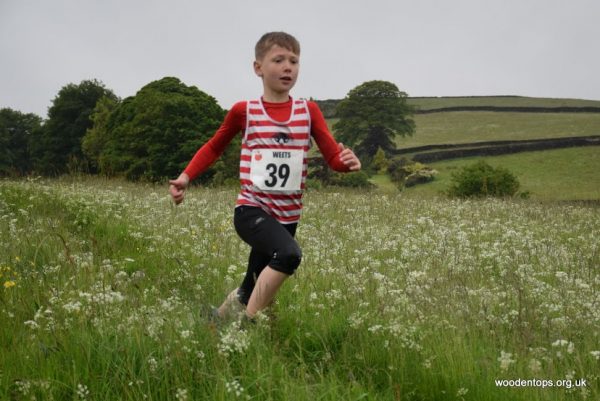 Photo all courtesy of Woddentops

Meanwhile in the Lakes on the Saturday saw four CV gather at the stat line of Lowgill Sports Fell Race as part of the BORFRA series (British Open Fell Runners Association). Unusually, it’s a downhill start then a steep climb through woods before reaching the open moor. A circuit around the moor, then back towards the woods, with then an uphill finish. At only 2.2miles, it’s fast and furious despite the 1000ft of climbing. CV’s Charlie Ing came an impressive 2nd, completing the course in a mere 16:19. Adam Osbourne and James Logue were only a couple of places behind  with Logue securing the MV50 prize.