Saturday 29th September 2018 was a bumper day for Calder Valley Fell Runners, with a number of different races, of various types and lengths, taking place not only locally but also further afield.

Off to a flying start: Red & White hooped runner Mark Burton flew the CVFR flag in Derbyshire at the first Fell & Back race, organised as a fundraiser by Buxton Mountain Rescue Volunteer Team.

This new event comprises 19.6km (12 miles) and a not inconsiderable 730m (just shy of 2400ft) of climb – includes some of the old Goyts Moss route plus some new ground towards Axe Edge and Wildboarclough, It was not only well attended but did extremely in the fund-raising stakes, bringing in approximately £1500 for the local mountain rescue – an organisation heavily dependent on fundraising and donations for its life-saving service.

As well as flying Calder Valley’s flag, Mark Burton also flew round the course – beating all 101 competitors to first in an impressive 1h24:47. After the race, Mark commented that he had enjoyed this ‘a nice race’ in the sun.

Despite being relatively short at only 3 miles (7km), this course packs a punch. Its 1310’ (400m) ascent features, on the way up, boggy fields, a steep climb onto the Moor and a second up to local landmark Stoodley Pike. The way back down is arguably even tougher, with a fast, grassy descent, followed by a short, technical drop, then an additional steep ascent back up to the ruin, then a further grassy drop back down, culminating in a race for the line back in the starting field. 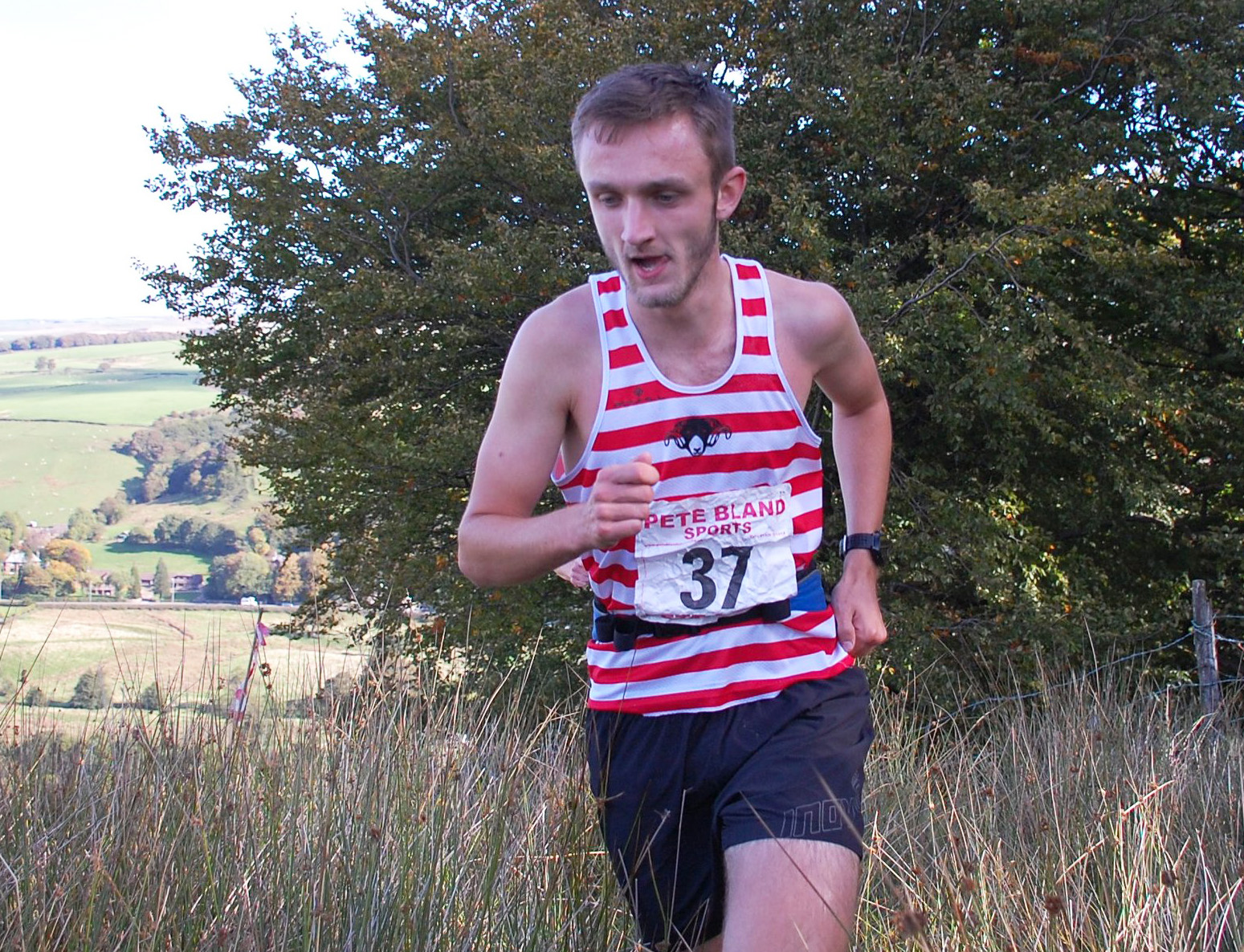 CVFR’s Martin Howard continued his impressive slew of race results, finishing 3rd overall (and first U23 – an amazing 23 places ahead of his nearest U23 competitor) in a fast race, where the winner was only just over a minute shy of the course record set 12 years ago. Howard himself finished in 33 minutes & 14 seconds, less than two minutes behind the winner and only 10 seconds after the 2nd placed runner. Other noteworthy runs from our men’s team included Mike Clayton, who finished 28th overall (13th in the men’s open category) in 39 minutes 24 seconds, and Andy Davies, who finished 60th overall & a fantastic 2nd in the V60 male category.

In the women’s race, strong runs were clocked up by Carole Fryer and Rachel Hyde. Fryer continued her impressive form with another good result, finishing 4th in the female V50 category in 47 :09. New to fell racing this year, CVFR’s Rachel Hyde ran a strong race to finish 3rd in the female V45 category in in 52 minutes and 20 seconds.

Experienced runners only can compete in the Ras Pedol Peris Horseshoe Race in Snowdonia. On Saturday, 29th September, CVFR trio Dougie Zinis, Simon Fisher & John Allan competed in this classic annual fell race, which starts & finishes in Llanberis. Not one the faint-hearted, this course covers approximately 28km (17.5 miles) and includes an eye-watering 2,600m (8,500ft) of climb.

97 runners raced in a mixture of full and half versions of the course this year. Whilst the full race was won by Mercia’s Huw Davies in a staggering 3h46 :34, Calder Valley pair John Allan & Dougie Zinnis also more than held their own. Although Zinnis led earlier in the race, in the scramble up Snowdon to the final peak, Moel Cynghorion, Allan caught up with him. The two ran neck & neck, as they battled it out between them all the way to the line. At the last minute, Allan edged out Zinnis, with 2 seconds separating the two team mates, who finished in 5th & 6th place in the men’s open category (22nd & 23rd overall) in 4hrs 24 minutes & 24 seconds & 4h 24 minutes and 26 seconds retrospectively. CVFR’s Simon Fisher also ran well in the men’s V40 category, finishing the race in 5hrs 56 minutes, in 61st place overall.

This CVFR trio were quick to sing the praises of this event. All three emphasised how they had ‘absolutely loved’ this ‘cracking race’, which is now one of their ‘firm favourites for the distance’, and had been all the better for the ‘perfect weather’ and tasty sausage rolls!

Resevoir Dogs – Ultra Marathon: Saturday 29th September saw a further trio of Calder Valley runners competing in the second annual Punk Panther Ultra Marathon Yorkshire. Part of the Punk Panther Series which started last year, this race forms part of six Ultra Marathons, and as important as the prizes awarded for each race, competitors also gain points which not only count towards an annual trophy for men and women but help qualify them for similar events held elsewhere.

Although all Punk Panther Races all start in Otley, West Yorkshire and finish in Pool-in-Wharfedale, West Yorkshire, they take place across a variety of challenging courses in West and North Yorkshire. This last Saturday’s Reservoir Dogs was 43km (27 miles) for the shorter race & 53km (35 miles) for the longer race, and included 750/950 metres (2500/3100ft) ascent. The longer race tours around seven of the reservoirs that serve the Leeds area, starting with Lindley Wood Reservoir in North Yorkshire, before going to Swinsty and Fewston Reservoir and then over to John O’Gaunt, Beaver Dyke, Scargill Reservoirs before returning to West Yorkshire via Stainburn Forest and Almscliffe Crag to Eccup Reservoir before finishing in Pool-in-Wharfedale (the shorter racce does not include Eccup Reservoir).

Results have yet to be published, an incredible run for CVFR athelete Phill Beecroft, saw him finish an impressive joint 3rd in the 27-mile race. Running together in their second ultra, Carolyn Shimwell & Harley Beecroft also ran well, finishing the 27 miles in just over 6hrs.

Quote from Harley: “It was tough adjusting to flat conditions, and these took a toll on our endurance. Carolyn dug deep to complete after a knee niggle early on. In addition, we’re pleased to have completed enough ultras this year to obtain points for the 2020 OCC which is part of the UTMB weekend (a 42-69km race in August 2020 starting & finishing in Chamonix, France, travelling through France, Switzerland & Italy). We just need to get through the ballot process now!’

Completing this weekend’s impressive results:  On Saturday 29th & Sunday 30th September 2018, the ROC Moutain Marathon Long Score took place. This weekend navigation event – held in the Northern fells of the Lake District over two days, has proven a popular choice with mountain marathon competitors. Open to both solo runners and pairs, this race is noteworthy as it requires competitors to carry their overnight kit throughout the two-day competition. For each day, there are 800 possible points to score by finding up to 30 controls in tight time limits (although this last weekend, no-one reached even 3/4s of these on either day).

In a tough field of competitors, Vetran CVFR club member, Jackie Scarf, and former CVFR runner (now racing for Pennine FR since a move to Derbyshire) Linda Murgatroyd, racing as a pair, scored 375 for day 1 (7h time limit), to place a respectable 24th. On day 2, with its tighter 6h timeframe, the ladies pulled out all the stops, finishing within a whisker of the time limit (only incurring a 1-point penalty) to score an impressive 404 points, and so placing 16th place for Day 2 in a tough field of competitors. Thanks to these results over the two-day event, the duo were the highest scoring female pair and took home the first prize for a female team. 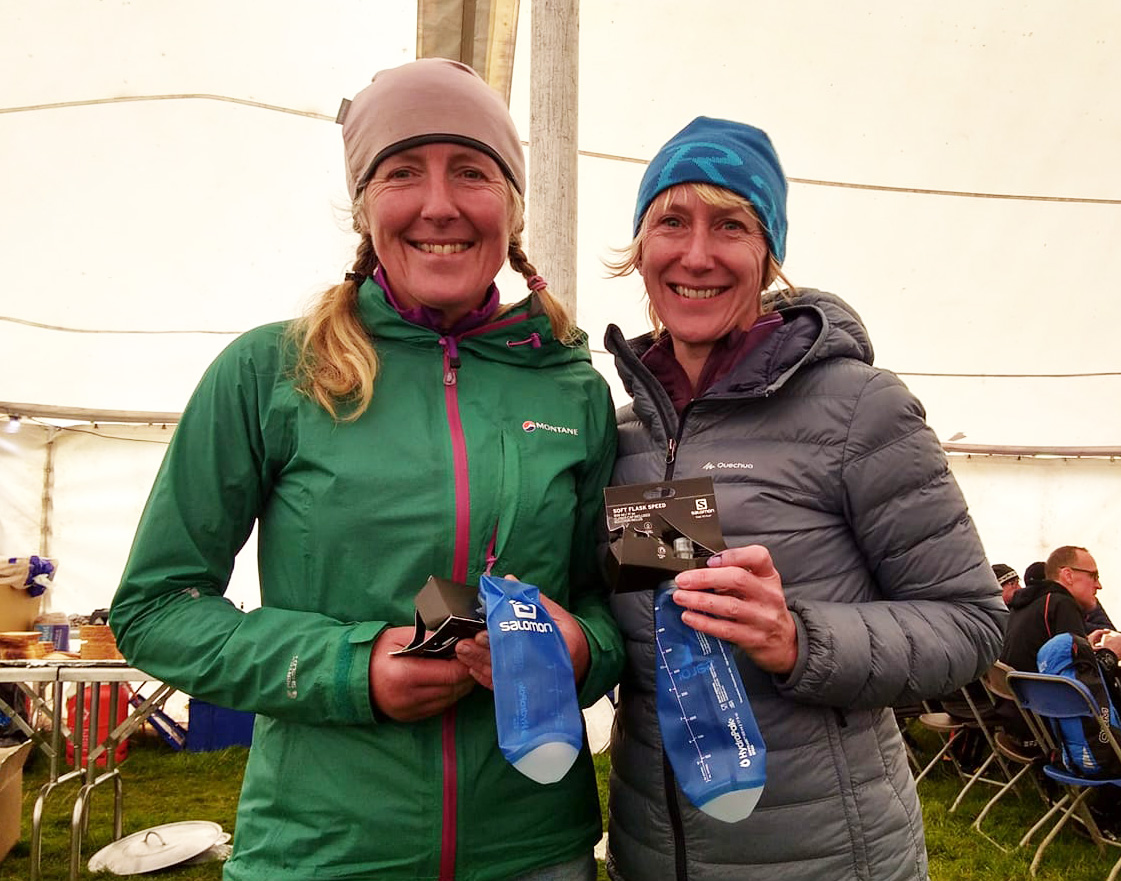 Quote from Jackie: ‘It was tough going – a mixture of runnable grassy hill tops, energy sapping heather and bracken, but with a great views of Skiddaw and Blencathra. We did a lot of climbing! However, there was also good weather and great overnight camp in the Mosedale valley’.