On the morning of Sunday 17th December, CVFR members, Phil & Jackie Scarf held the annual Winter Score. Despite the inclement conditions, this year’s event boasted 47 entries – mostly consisting of individuals & teams of friends & family members from Calder Valley Fell Runners & neighboring club Todmorden Harriers. Competitors were provided with a map & up to two hours to find as many of the 26 controls strategically placed around the local countryside as possible. With strict time penalties incurred per minute for late return to Saint John the Baptist in the Wilderness church at Cragg Vale which kindly provided a base for the event, the Winter Score is as much about planning & tactics as skill as a fell runner. This year’s event was additionally challenging, as aside the seasonal cold & rainy conditions, snow on the ground made finding controls extra tricky and an abundance of ice saw runners struggling to stay on their feet at times, as they slid between controls, trying to score maximum points. 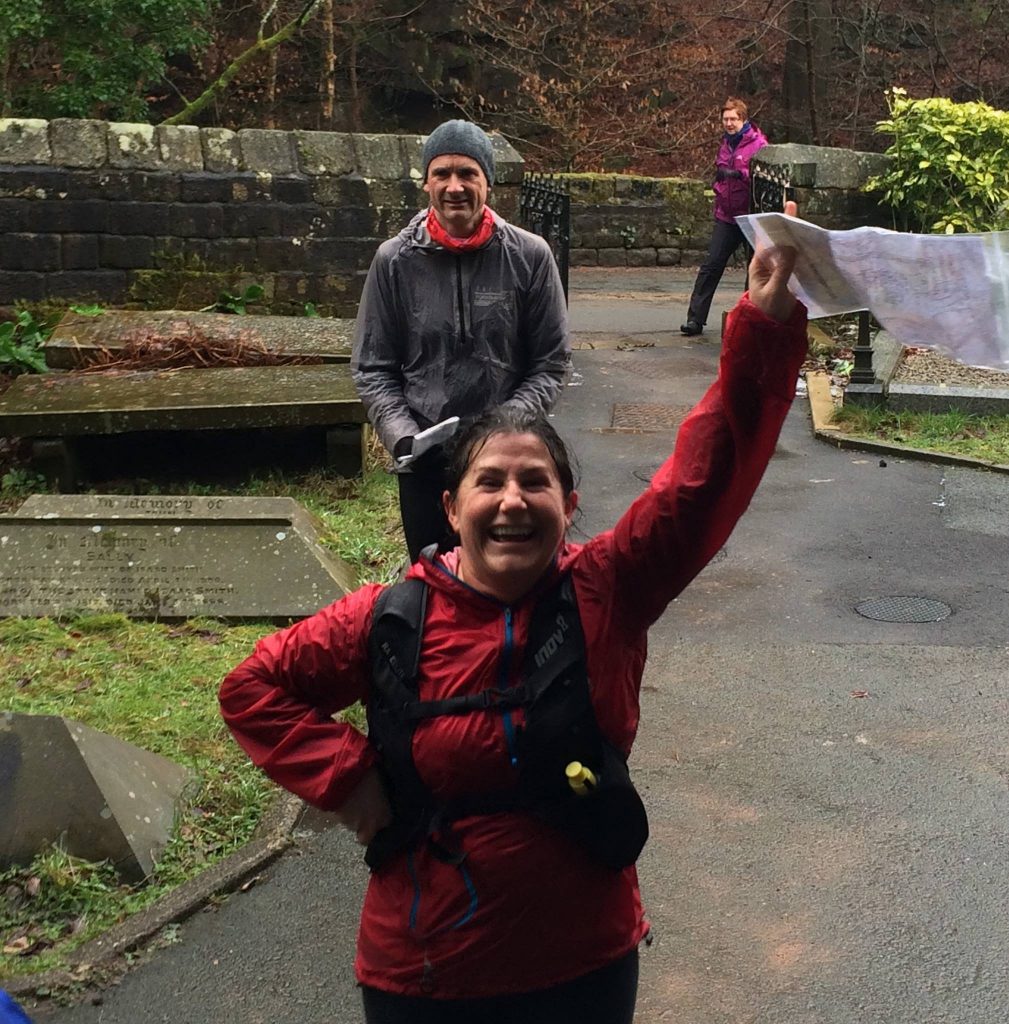 Local writer & fell-running legend, Chris Goddard (Todmordern Harriers) clinched this event in 1h54 with 52 points. He was closely followed by CVFR’s Tim Brooks, who won the Men’s V40 category, coming in just three minutes after the 2h mark: the resulting 3-point penalty, leaving him with a score of 51. A few runners from both clubs clocked up a scores of 41, including Phil Hodgson from Todmorden Harriers (winner of the men’s vet 60 category) and mixed V40 pair Richard Sunderland & Catherine Holden.

Other impressive performances included the father-son team of Ian Powell & his son Eric (CVFR), who came in five minutes short of the 2h mark with an impressive 36 points to take the family prize and John Crummett (Todmordern Harriers) who won the men’s V70 with 30 points. The competition for first individual ladies was an extremely tightly fought race, with three of Todmordern Harriers female runners scoring 34 points, although Kath Briely narrowly edged out fellow V50, Mandy Goth, due to returning to base just four minutes before her team mate, to win both first individual female and first female V50 by a whisker.

A big thank you to Phil & Jackie Scarf for organising what was agreed all round to be a challenging event and a fun thing to get everyone out of the house on a misty, grey and damp December day. Thanks must also go to the church and the volunteers who provided much needed cups of tea, butties and cakes following the event and an equally warm welcome.

In the Bleak-Mid Winter – CVFR Juniors Show The Way:

Sunday also saw several CVFR runners compete in the 8km race ‘The Stoop’. Whilst the elite athletes were mostly taking a well-earnt rest & many of the Calder Valley fell runners who might have raced otherwise opting for the winter score event over a race famous for its Santa hats & bogs in equal measure, the weather did not stay away.

For the 180 runners who squared up to the elements, it really was a bleak mid-winter: with swirling fog, pouring rain & the grounds of Stanbury Quary & the surrounding Bronte Moors as hard as iron and peppered with knee-deep ice-filled bogs. Given this context, the race was shortened for the first time since 2010, but despite all this, there was plenty of good cheer amongst the runners – decked out in their obligatory Santa hats, and some even braving full fancy dress, in the hope of winning the coveted chocolate-filled stocking prizes. 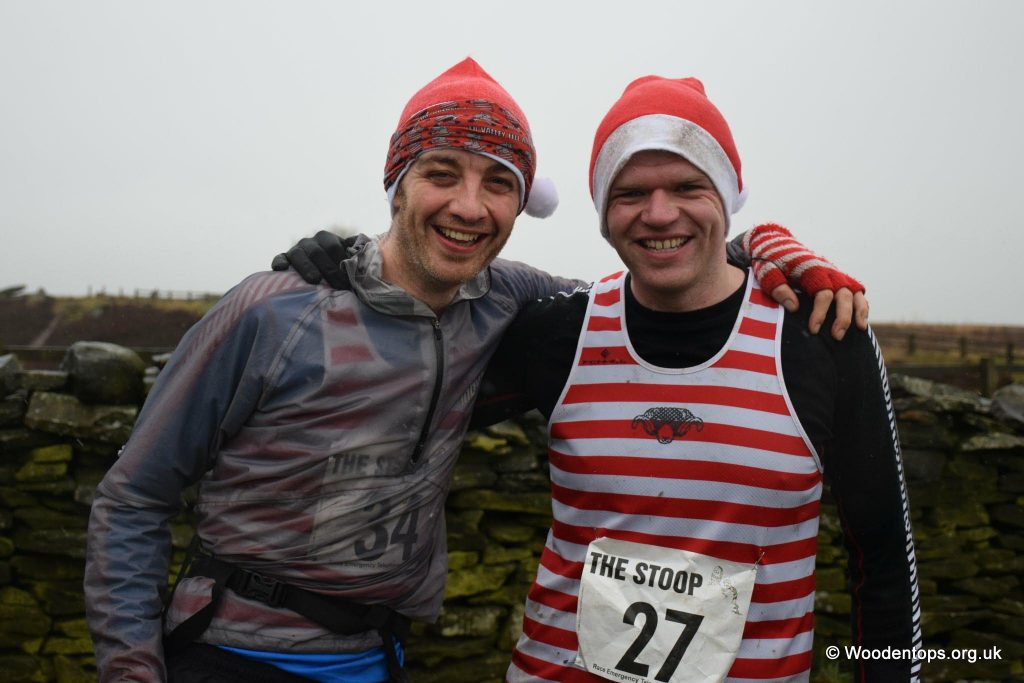 CVFR female V40, Jo Buckley, ran another particularly impressive race, finishing first lady for Calder Valley Fell Runners and 5th in her category, with a time of 40 minutes & 26 seconds. For most of the other CVFR racers, this year’s Stoop became more about personal rivalries than podium finishes. Calder’s Paul Haigh & Stephen Smithies went head to head up the hill, although on the way back down, Stephen Smithies battled on to take the lead over his team mate, who – in his own words ‘demonstrated how Bambi may have performed if given the chance’. Smithies finished 45th in 38 :55 and Haigh came in overall 55th with 40 :09.

Further down the course Lindsey Oldfield once again out performed Calvin Ferguson. The former’s uphill prowess enough proved enough to see off her rival, with Oldfield finishing 6th female in the open category in 41 :08. Meanwhile, Ferguson came overall 80th with a time of 41 :49 – the gap between the two continues to narrow.

It was down to CVFR’s juniors to show the seniors how it should be done, and the red & white junior hoops were all over the podiums (plus extremely happy with their chocolate haul of prizes).

It was 1st, 2nd & 3rd for Calder Valley in the boys U13 category, with William Hall storming home again to finish first (and fourth overall) at 6 :44, team mate Alex Duffield coming in second U13 at 6 :59 and James Duffy taking 3rd U13 at 7 :11. In the U9 age category, Sam Annison took first, in his last race before going up an age group, at 2 :46, and absolutely loved the race. There were also strong performances from Lucas Greenwood & Edvinas Adomavioius who finished 2nd & 3rd in the older age category. Other noteworthy performances included Harry Cliff, Edward Chrisanthou, and Ted Parker who finished 4th, 5th & 6th in the boys U9s and Finley Canning who placed in the top 15 in the U11 boys category. 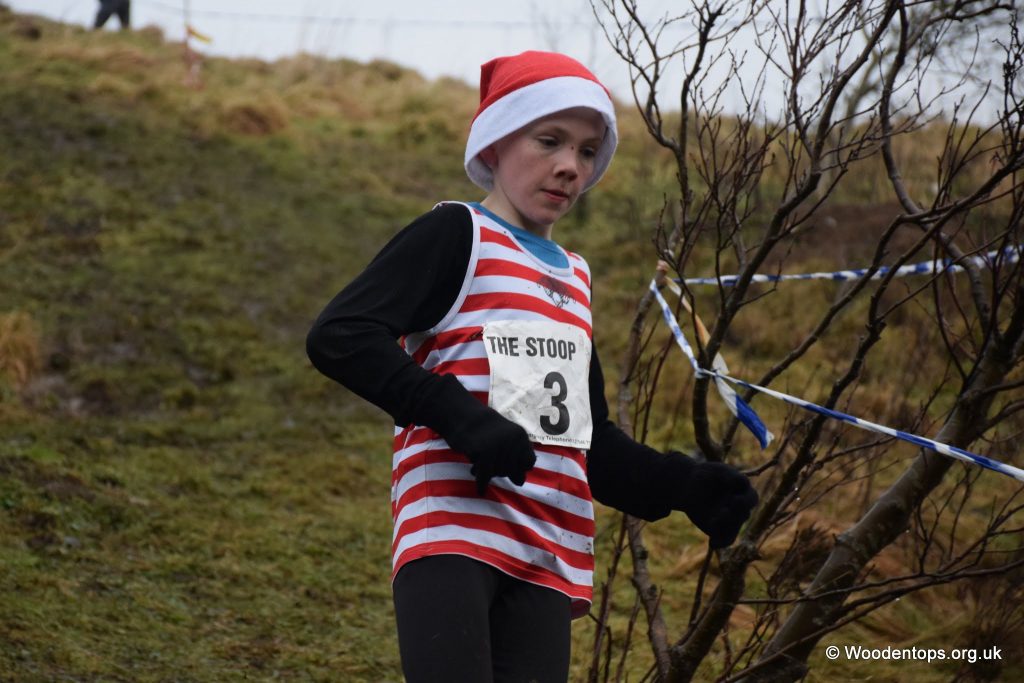 This weekend as the shortest Saturday in the year, also marked the annual classic winter mountain run, the Tour de Helvellyn. Four CVFR runners set off to compete in this 38-mile ultra-marathon, including approximately 2,000 metres of ascent & descent, around Lake District trails, bridleways & mountain pathways. Calder Valley’s John Allann who came in 31st overall in an impressive time of 7h  37 minutes & 47 seconds, described the race as:

“A beautiful day with good visibility, deep snow over the tops, lots of ice elsewhere and constant sub zero temperatures”. 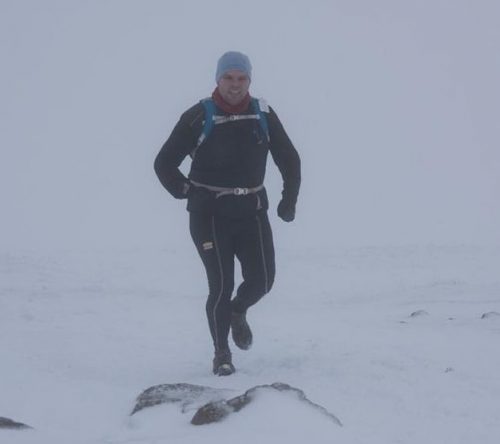 This week also marked CVFR runner Paul Haigh successfully completing the amazing challenge he set himself to run 1000 miles – including 138k of ascent (& winning the Calder Valley Handicap Champion – measure of improvement v 2016 Handicap). Paul & colleagues from Lloyds Banking Group have raised the fantastic sum of £10K for Mental Health Uk -a network of four charities – Rethink Mental Illness (in England), Hafal (in Wales), Mindwise (in Northern Ireland) and Support in Mind Scotland. These four currently fund 148 local charities who are supporting individuals to improve their mental health and move on with their lives.

When asked about the c/£5K Paul has raised from his running alone, he was quick to highlight how :

« One in four people are affected by poor mental health and, of these, around four million will also struggle with their financial wellbeing. Even more frighteningly suicide is the most common cause of death for men aged 20-49 in the UK. And anyone who has suffered with Mental Health issues knows just how hard it is to find support even in this day and age.
I was lucky in that i could afford to pay for professional help. Millions others cant.

If you are interested in finding out more about this challenge or donating to this cause, please visit :
https://www.justgiving.com/fundraising/fpannualfundraising 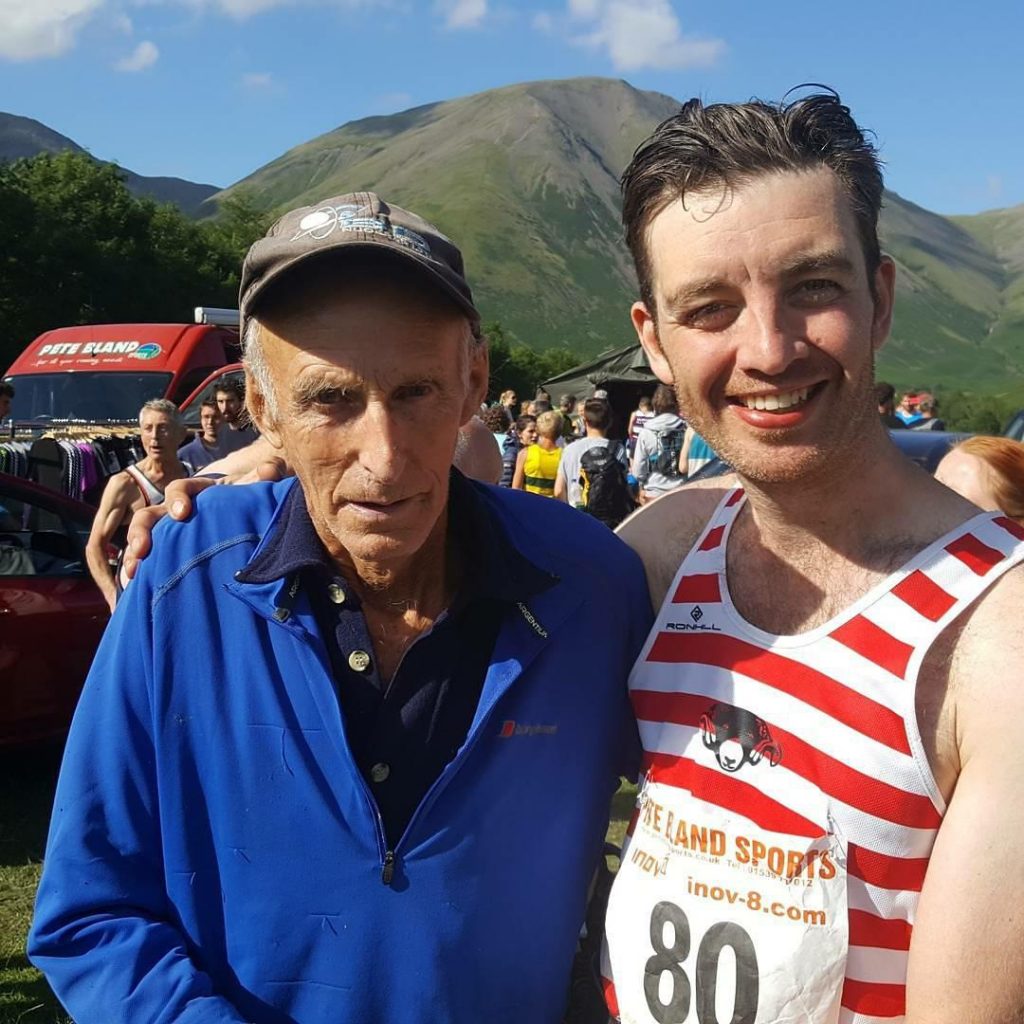 Paul during his challenge, with the one and only legend Joss Naylor – credit Mick Fryer