Calder Valleys mini beasts, Karl Gray and Gavin Mulholland were on parade at the weekend, smeared in matching red and white Butlin’s red coats, to collect their National awards for jointly winning the English Championships vet 40 title, with Mulholland winning the vet 45 trophy and the Earl finishing 2nd. 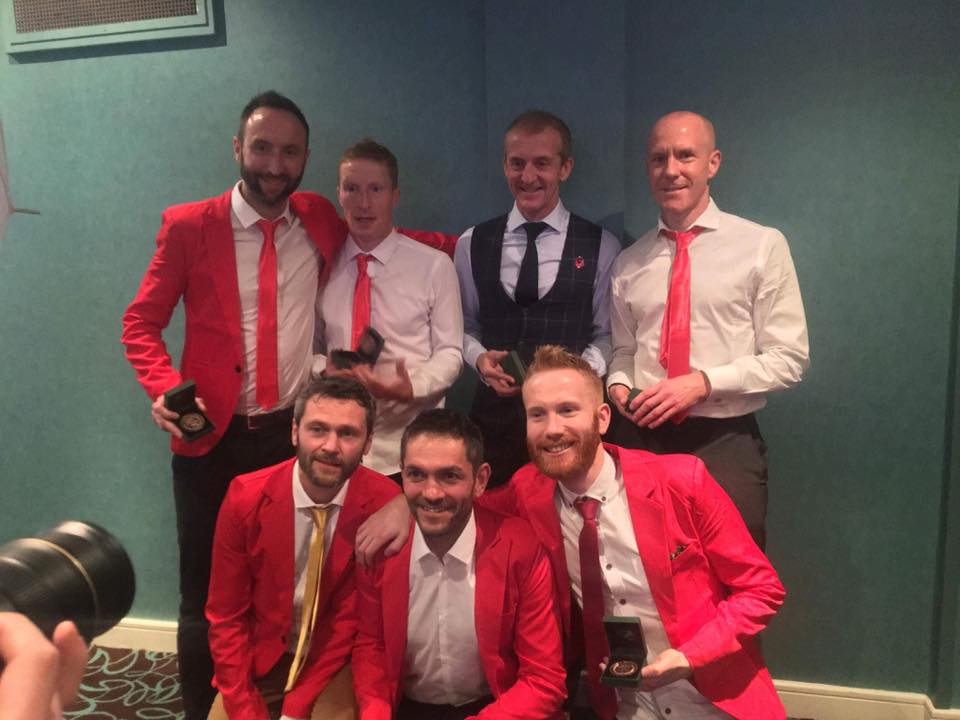 Aged 48 and 46, both were still able to compete at the sharp end all season with Karl coming 2nd in the brutal long race at Wasdale. Their form extended to the international scene with Karl representing GB for the 2nd year in a row, and Gavin leading the Northern Ireland squad in an attempt to feel like an international as well. The lads were also accompanied by the rest of the team to collect their team awards also. The vets team on the night included Mark Taylor (bofra v45 champ), Darren Kay and Endurance specialist Stephen Edwards , who were there to collect their medals for finishing first vet team in the English champs, and 2nd in the British champs. The open team who came 3rd in the English were also represented by yorkshires finest, Ben Mounsey and Andy Swift.

Karl the legend summed up the evening saying “it gets harder every year considering my age and the standards of competition at each race. We had many an epic battle and I will be training hard over the Winter to be ready for the 2018 season. There is a lot of talent in the valley considering our team as well as Tod Harriers vets, with their success in the Brits also”.

Both clubs partied hard into the early hours. Mulholland was seen leaving the hotel watching excerpts from the six  million dollar man, to psyche himself up for next year.

In other news Richard, I like long runs, Pattinson decided to show how good a super vet he is at the tour of Pendle, coming first in his age category, v50. Other runners included Darren Earnshaw completing the course for once, Calvin Ferguson, John Allan, Simon Bourne, Ian Symington, and Helen Buchan for the ladies.