Despite the cold, windy conditions and greasy, boggy Pennine mud, the runners were not deterred. The fact that Vocation Brewery (Cragg Vale) sponsored the event and provided a can of ‘Heart and Soul’ to each runner may have had something to do with the high turnout though… Calder Valley Fell Runners took over the race this year from Halifax Harriers and ensured that is was a massive success all round – including top prizes for their own runners!

The tough 6 mile race starts at the base of Red Acre wood and tours the terrain on and around Midgley moor – calling past Churn Milk Joan, Crow Hill, Luddenden Dean and the Calderdale Way, before dropping steeply again through Red Acre woods to finish. Of the 1,650 ft of the ascent, 1,000ft is in the first mile alone.

On the start line there was some serious talent, with Calder Valley’s Karl Gray being one of the several favourites. In the end, the race was one by Chris Holdsworth of Clayton-Le-Moors in a time of 0:45:54 and first home for Calder Valley was Gray in 0:46:50. 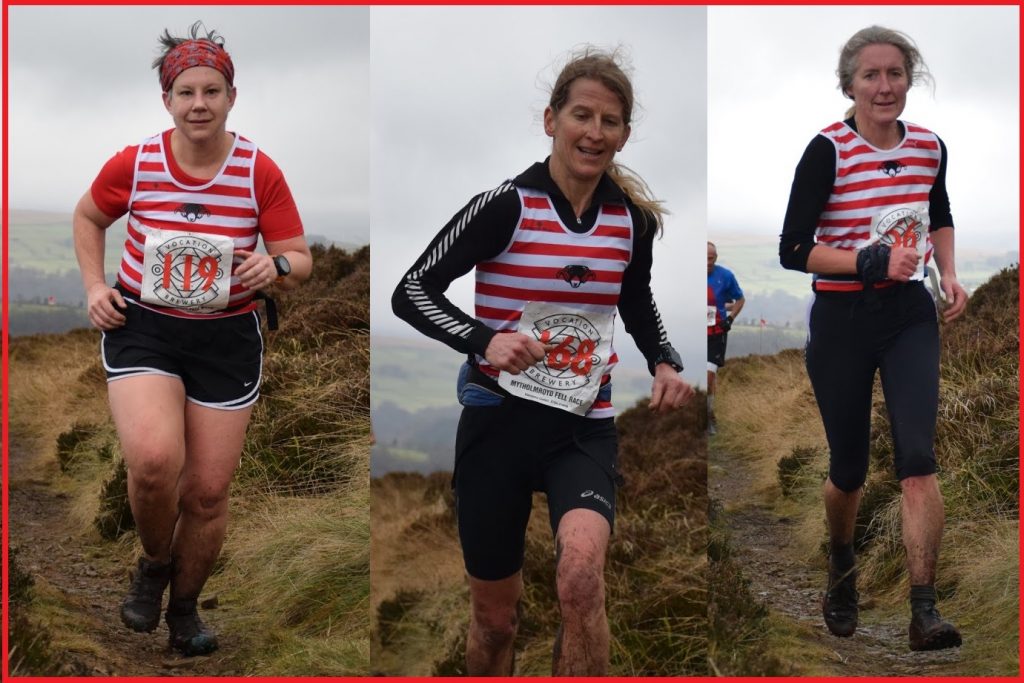 There were a few Calder Valley skirmishes throughout the race, in particular between Bill Johnson and Mark O’Connor and between Stephen Smithies and Paul Gilbert – with Paul catching and passing Stephen along the Calderdale Way before faceplanting the mud on the steep descent to Heights road and losing his stride subsequently. 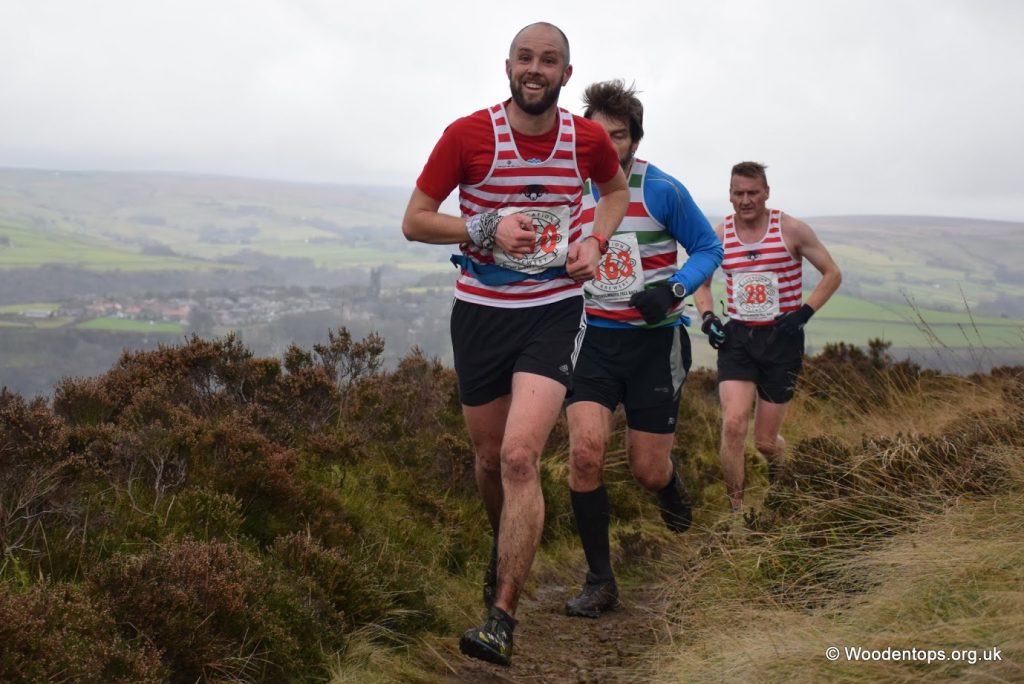 Paul and Smithied battling it out.

Royd local Mark had this to say “Half way up the first ascent, que, part man part machine, Calder valley’s very own mountain man Bill Johnson gliding past me. I started thinking I should run faster but was un-able to, but the pain of Bill going past so early on was eased by the fact that I know he’s an all-round class runner and currently in fine form, so I got it together and kept him in sight.

The first decent from Crow Hill was where I had hoped to gain a place or two but ended up getting held up and lost sight of Bill for the first time in the race. Luckily around the next corner Bill had stopped to tie his lace (school boy error), so I closed the gap, but even luckier he stopped again to tie his other lace, so I comfortably glided past!! To my frustration Bill then glided past me again within a few minutes just before the steep steps back up to Midgley moor by Castle Carr. I dug deep and used the heather and ferns to pull myself up. Coming back over the moors on the return I started to settle into the race and sat on Bill’s heels but he clearly was not about to roll over and started pulling away again along the boggy terrain of Dimmin Dale.

At the top of Wicken Hill I scampered over the rough heather to overtake Bill and the other two runners but lost my footing and somersaulted through the air landing on my back, blocking the path and facing the oncoming runners. Down Wicken Hill was seriously muddy and slippery and I was doing my best to keep up with Bill’s quick feet; it wasn’t until the final track I managed to out stride him to steal the victory by only a few seconds.” 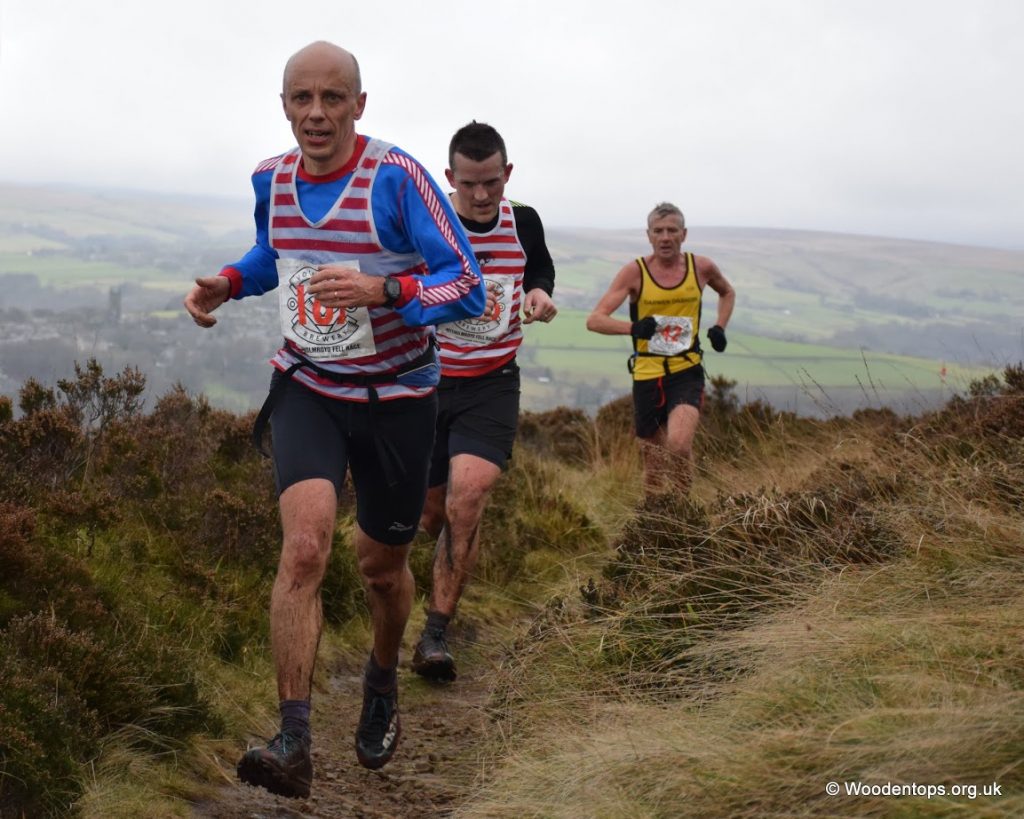 Mark and Bill duel for 6 miles but Bills 1st Vet

Ultra vet runner Dick Spendlove of Norland finally got his hands this week on the English Championship M70 fell running trophy, which he had battled hard for earlier this year. Dick, who runs for Calder Valley on the fells and for Stainland Lions in other disciplines, was away on holiday and missed the presentation in mid-November at the Fell Runners’ Association annual dinner.

The championship was decided over 4 races, with the best 3 results to count. Two wins in his category, at Glossop and Sedbergh, and a second place at Pendle gave him the trophy and the gold medal, beating last year’s champion, Kieran Carr, and fell running legend Jeff Norman into the runners up positions. It has been a successful year for Dick off the fells as well since he turned 70, winning the Yorkshire Vets’ M70 5km title in July, taking 2nd M70 spot in the prestigious Great South Run over 10 miles in October and currently having the fastest M70 time at 5 different Parkrun venues, with a best 5km time of 20m 38s. Well done Dick! 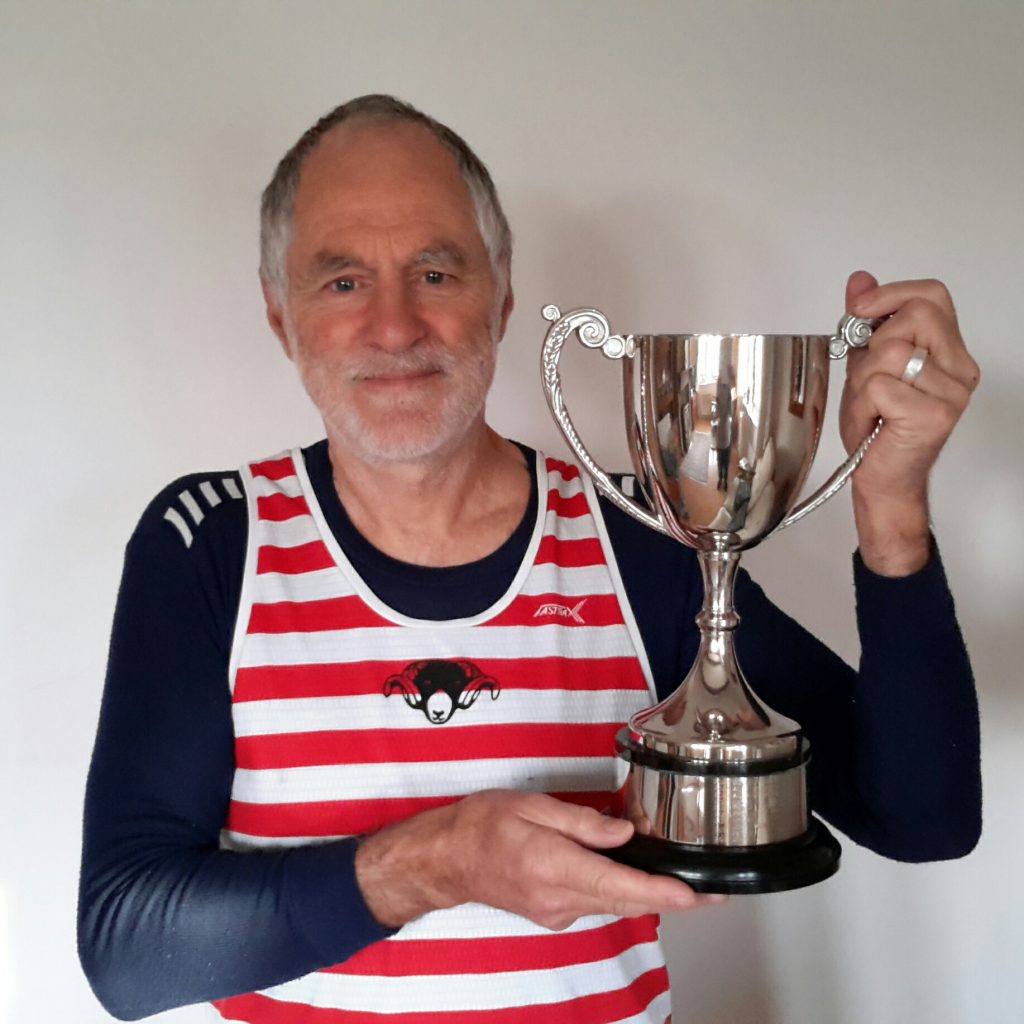