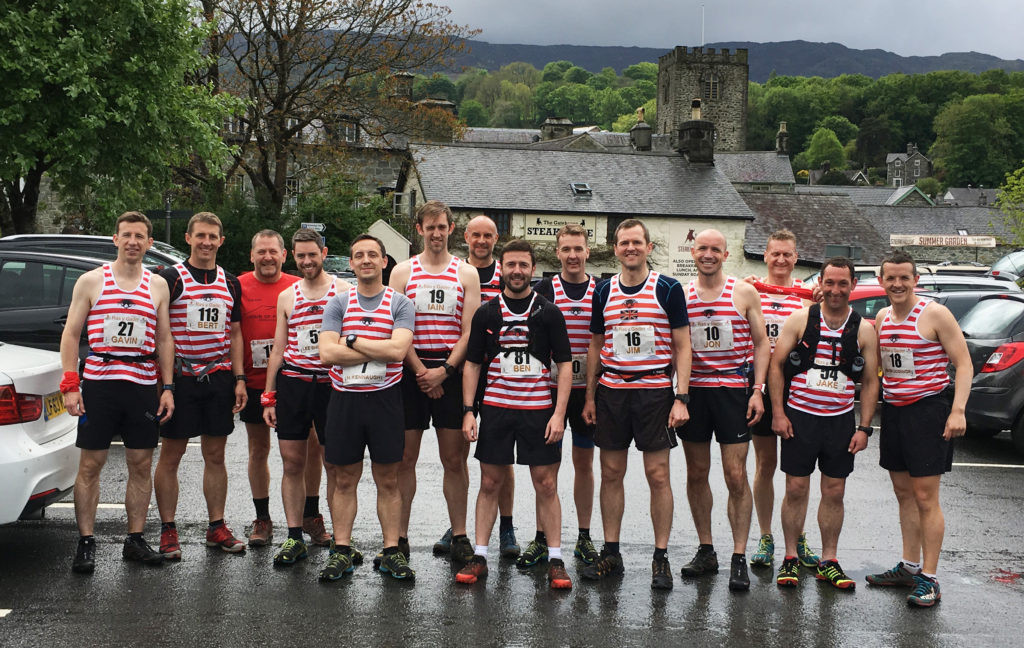 The latest round of Calder Valley Fell Runner’s Club Championship took place last weekend.  The Y Gader (Cader Idris) Mountain Race from Dollgellau is a straight-forward race, up the mountain and back again.  However this does involve 10 miles of runnable paths and over 3000ft of climbing.  The mountain was covered in mist so the views were limited. 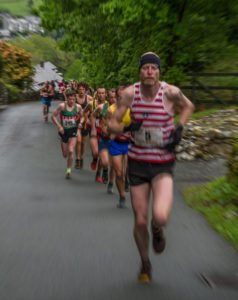 Part time road runner Jason Williams lead the race along the road section out of town but had to relinquish his lead once the going got rough.

Despite this he came home with maximum championship points as the first Calder runner in 1 hour 36 minutes and 9th place (second vet 40).

The race was won by John Bowie of Mercia in 1 hour 26 mins and Nina Skilton of Cannock Stafford won the women’s race in 1 hour 59.

At the head of the overall championships the battle is as close as ever between Mark O’Connor and Jon Smith, having run together at Calderdale Way the week before, they were back to fighting for the odd point to determine the club ranking.  Mark was the victor in this battle, beating Jon by just 38 seconds and three places.

In the ladies competition Nicki Latham had an excellent race as second place vet 50 in a time of 2:23:37.  She has clocked up her second counter of the season and is sitting in joint second place in the women’s championship.

Richard Ingram, Paul Haigh, Gavin Roper and Nathan Kennaugh all had good races and scored well in the championship race. 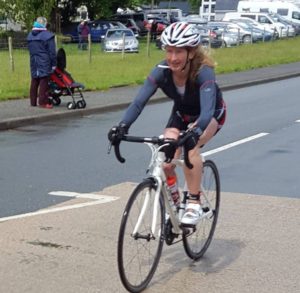 In terrible weather requiring full waterproofs to be worn, Jackie Scarf and Linda Murgatroyd were 1st lady vets and 2nd ladies overall at the Old County Tops race in the Lake District. A brute of a race the route takes in the historic county tops of Helvellyn (Westmoreland), Scafell Pike (Cumberland) Coniston Old Man (Lancashire). The shortest route is some 37 miles with over 10,000ft of climbing. Ian Symington and his partner also has a good run for a great 4th place overall. 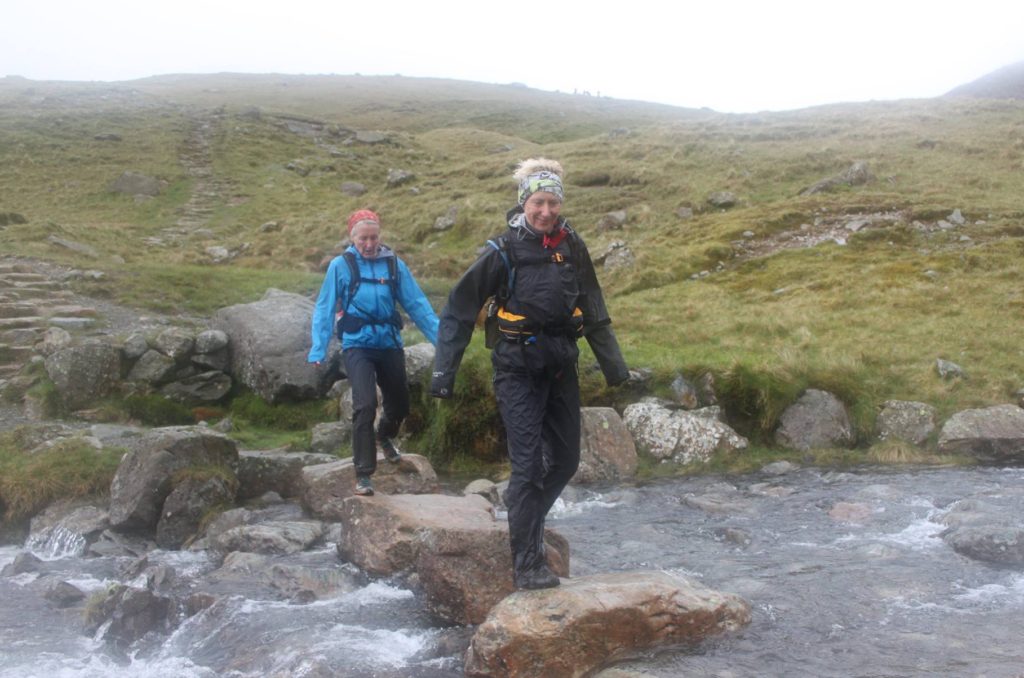 What a weekend for Calder Valley Fell Runners! 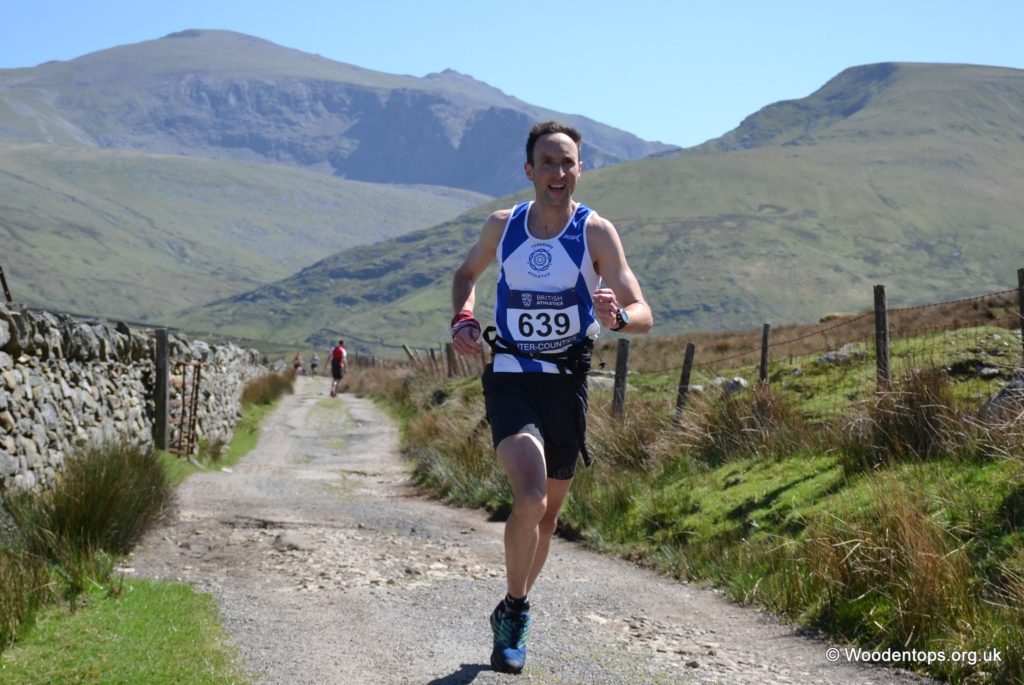 Saturday saw the British inter counties championship take place in North Wales, on a tough 8 mile course with nearly 1,000 metres of climbing. With the five best runners from each county, it pits the cream of road, cross country, fell and mountain running against one another. 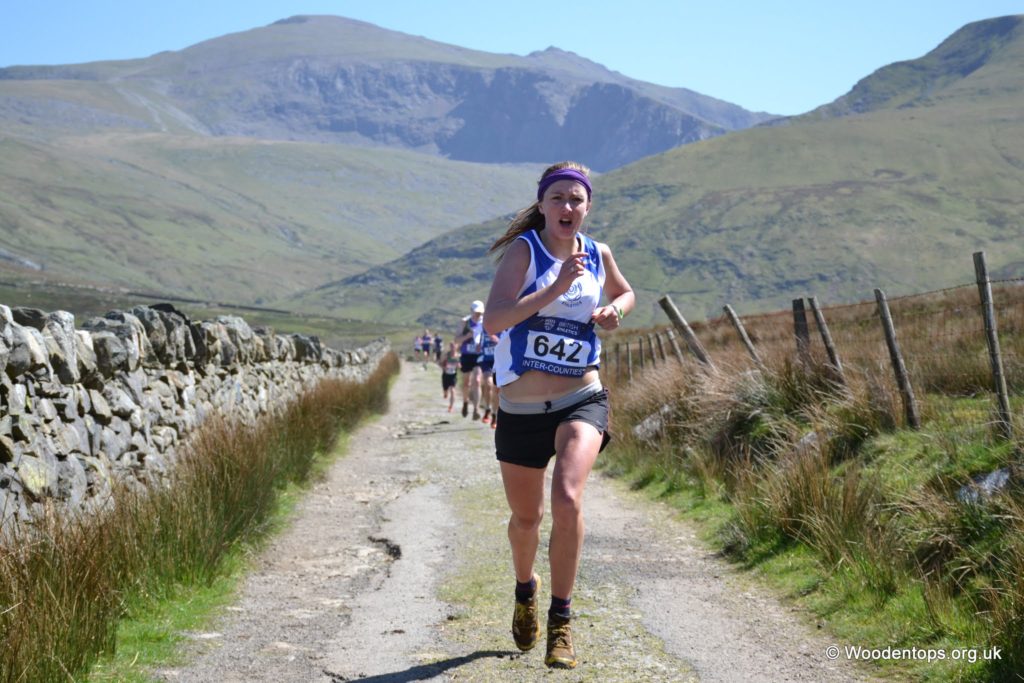 Calder Valley had two runners in the Yorkshire team, Ben Mounsey for the men, Holly Page for the women – and neither disappointed. The in-form Ben beat the very best of Britain’s fell runners to win the race in just over 60 minutes, describing it as “by far the biggest win of his career,” while Holly came an outstanding fifth in the women’s race, finishing in 73 minutes. Both led their teams to great results, with Yorkshire taking first men’s team and second ladies’.

Deciding against his trademark fast start, Ben says “I began the race at a sensible pace and many of the favourites hit the front at an alarming pace. I began to work my way through the field. I felt good and as we approached the summit of the first major climb Moel Eilio I found myself in 5th. At the top of the final extremely steep climb I began to follow the leaders but realised they were taking a poor choice of line and headed down at a different angle. When I hit the last checkpoint I had about 10 to 15 seconds of a lead and all that was left was a fast run in for about 1.5 miles down a rocky mountain path. I gave it everything I had and didn’t look back. I sprinted as fast and hard as I could and it wasn’t until the very last 100m that I knew I’d won.”

“I was so emotional at the end I was nearly in tears – I never believed I’d ever win an intercounties championship but I’ve actually gone and done it. To be crowned the UK’s number one fell runner and to do it whilst wearing the Yorkshire vest is quite literally a dream come true for me.”

The following day was the largest fell race in the UK calendar – the Calderdale Way Relay, expertly organised by the Halifax Harriers. 102 teams, each with 12 runners took part in the relay, which splits the 50 mile footpath into 6 legs, with pairs running each leg.

Calder Valley had an excellent day, fielding 6 teams. Despite a weakened team due to injuries and holidays, the men’s A team took third place, just behind Wharfdale and Barlick, completing the full 50 miles in just over 6 hours. Next in for Calder was the Mixed A, who won the second mixed team, in a little over 7 hours. 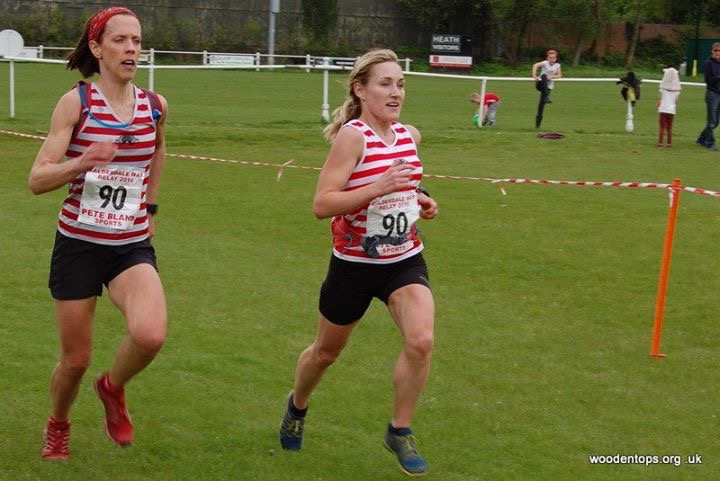 There were some stand out performances from Calder Valley runners. Gayle Sugden and Lucy Collins, in particular, smashed the women’s record on leg 6, taking over 3 minutes off the fastest time to complete the 10 mile leg in just over 1 hour and 16 minutes. Mark O’Connor and Jon Smith, meanwhile, recorded the fastest time of the day on leg 3, a tough climb without any respite, from Todmorden to Blackshaw Head.

With so many teams fielded by Calder Valley, there were some heroic runs from Mark Goldie, Ian Symington and Ian Glendinning, among others, who stepped in at the last minute or partnered with faster runners to ensure the teams could run. And for many runners, this was their first experience of one of the highlights of the fell running calendar. 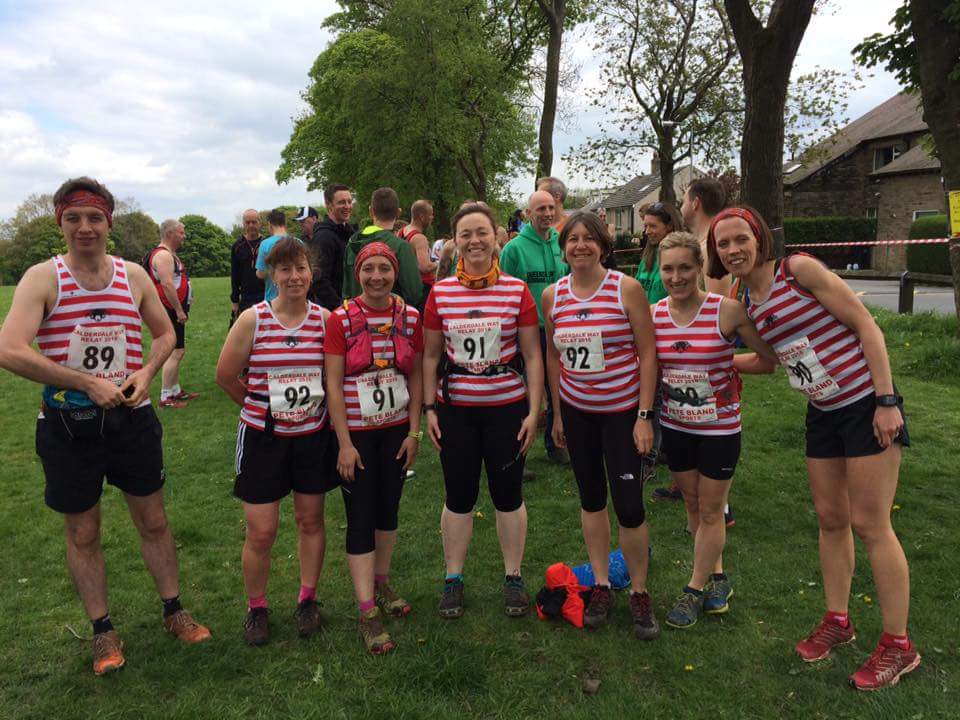 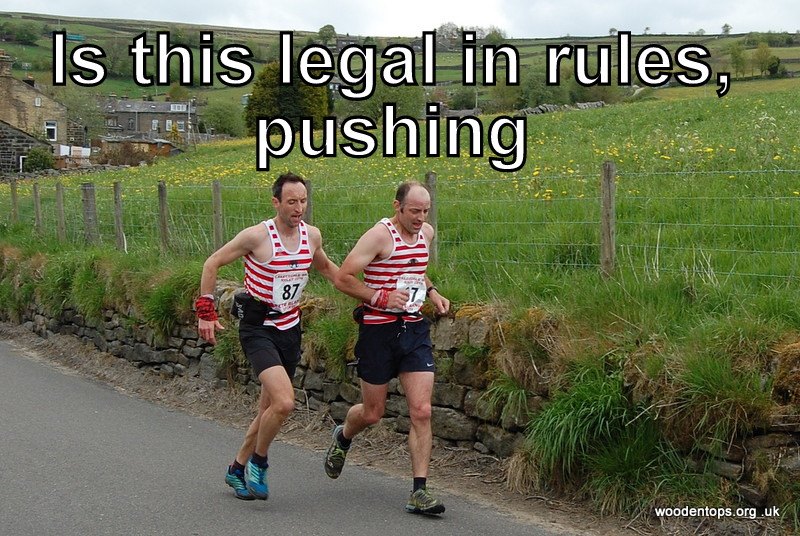 He must have blinking strong arms ….

What a difference a week makes. Just 7 days after many of the country’s best fell runners battled it out over Yorkshire’s wintery 3 Peaks, blanketed in late April snow, lashed by icy blasts of hail, England’s finest found themselves baking in an early May heat wave on the hills of Derbyshire’s Glossop Dale.

The draw of FRA English Championship points ensured many of Calder Valley’s strongest runners made their way to the Peak District to line up in a field of 366, for Saturday’s “Up The Nab” fell race.  The category “A – Short” rated route, the toughest level based on ascent per mile, started at Glossop Rugby Club, with a scrum of elite runners, representing all of England’s major fell running clubs, competing for national honours. The English Championship is made up of 6 races, two long, two medium, two short, chosen each year from the most challenging courses in the fell running calendar. Runners compete based on a points system according to performances in the “counting races”, the runner with most points over their best 4 races is crowned as national champion – the highest honour in the sport – along with further championships across male and female, teams and age categories. Many of Calder’s elite runners have set their sights on seizing titles following strong performances last year. 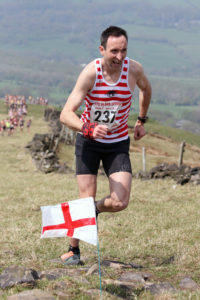 Mounsey Up the Nab

Calder’s Ben Mounsey is the club’s best hope for national glory, and he made his intentions clear, leading the way up the first climb as runners embarked on 3 ascents of Whitely Nab, totalling 1200 feet of climbing packed into a mere 4 miles of grassy hillside. This effort placed huge demands on the in-form Mounsey, whose strategy was to hit the front then work hard to build up an early lead, taking advantage of his devastating pace in attempt to split the field early on in the race. As Ben approached the first summit he had a few metres advantage on the chasing group, but wilting in the heat he began to falter.  He picks up the story, “I tried to put in another effort but something was nt right – it was like I was missing an extra gear. I was beginning to feel the heat already and it was not long before I was overtaken by all three of my main rivals. My tactic then was to try and stay with this elite group” Mounsey had to finish in the top 5 if he was to have any chance of keeping his hopes of winning the championship alive. Feeling dehydrated and desperate for water the Calder Runner battled to stay on the coat tails of the leaders, but was soon overtaken by fell running legend Rob Hope who finished 5th at the previous weekend’s 3 Peaks. This was a worrying situation with 3 quarters of the race left to run as Mounsey had opted out of the 3 Peaks to increase his chances against those he hoped would still be recovering. On the penultimate climb Mounsey put in a massive effort to launch himself to the summit just behind Hope with the 3 leaders a few seconds in front. He then upped the pace to take over Hope on the descent, holding on over the final climb and sprint finish to keep a critical 4th place in 34.41, behind first placed Simon Bailey of Mercia (34.04), Steven Hebblethwaite of Keswick (34.10), and Sam Tosh of Rossendale (34.27). “This was not my finest performance. Although I’m in form I didn’t get my tactics right at the start and I didn’t feel at my best. But I’m not making any excuses, I was beaten by three better athletes on the day and had Rob not raced at the 3 Peaks then I’m sure I would have been 5th. The main thing is I didn’t give up and I fought hard to earn a top place finish so in many ways it’s one of my best results this year. This was a good result and it puts me in a very strong position with 4 races still to go.”

Mounsey’s 4th place means that he is still in first place overall in the English Champions. Calder Valley’s strength in depth was demonstrated as Karl Gray came in 9th (35.27) as first Vet 45, an amazing effort on the back of tired legs after his outstanding 4th place at the 3 Peaks, securing a GB vest for The World Long Distance Running Championships in Slovenia. With Tim Ellis, Darren Kay, and Alex Whittem putting in strong results Calder Valley’s elites can be proud of taking the honour of 3rd placed team ahead of many of the UK’s most formidable clubs, with James Logue and Jason Williams counting to help Valley’s men secure maximum points in the veterans category. One of the runs of the day came from Dick Spendlove who was 1st in the vets over 70 competition. 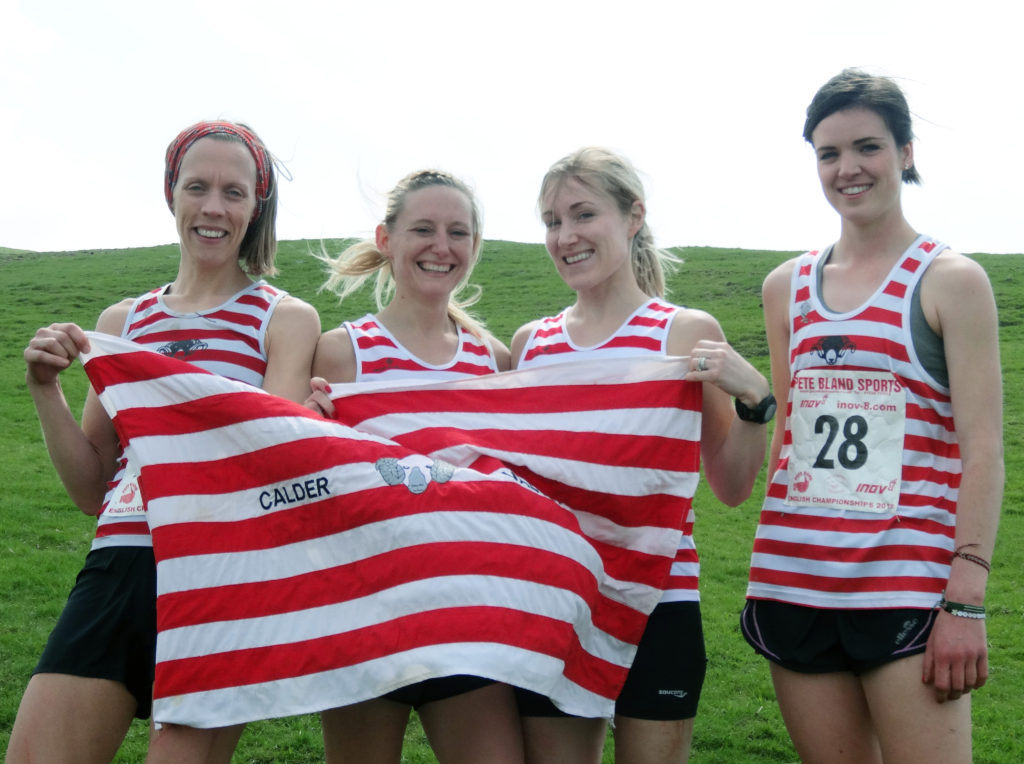 The ladies also had a great race with Lucy Collins, fresh from the London marathon and Gayle Sugden, also tired from the 3 Peaks, pushing and encouraging each other all the way round the race to finish 9th and 10th respectively. Lindsey Oldfield ran one of her best races ever where she raced hard downhill to sneak in front of some other club runners to help to secure 17th place and a great second team place for the ladies. The ladies are still in a strong position after the first two championship races to be in contention for a medal. Rachael Crossland ran a solid race to take 5th place as an under 23 suggesting real potential for the future.