The picturesque village of Betws-Y-Coed in North Wales was the setting for the 31st running of the World Mountain Running Championships.  32 countries took to the start line in the main event on Saturday afternoon with Calder Valley’s Ben Mounsey lining up for the club’s first ever Great Britain cap . The course involved 3 laps of the course covering a total of 13km with three steep climbs. The competition is really is the really is as good as gets in the world as fell running, as the then planet’s hardest, fittest, fastest, and most technically gifted, come together to fight it out on the international stage.

This was the 3rd time in the 31 year history of the competition that it had been held in the UK and the first time in Wales. The route for the senior men was 14km, run over 3 laps, from the centre of Betws-y-coed to Llyn Elsi lake with a total of 2700 feet of climbing. Snowdonia’s mountains basked in warm summer sunshine, perhaps allowing those used to running in Africa, America, and continental Europe to feel more at home. For once the GB guys must have been wishing for some classic clag to help their cause. The senior men had never won a team medal in the history of the competition and this was their best chance, with an extremely strong team with Scotland’s Robbie Simpson leading the charge backed up by Andy Douglas, Chris Smith, Tom Adams, Tom Addison and Valley’s very own Ben Mounsey.

The race started in almighty battle to win an early advantage, Mounsey had to work his way from the back, amidst elbowing and jostling as runners fought to get a good position near the front of the race. Ignoring the setback of picking up a cold the week before the race, Mounsey’s plan was to take the first lap steady, pace himself, and work his way through the field. Settling in to a good rhythm Ben was in the top 40 after lap 1,  before putting the hammer down in lap 2, to show a host of the world’s finest mountain runners a clean pair of Calder Valley heels. Mounsey’s devastating pace on this second ascent saw him climb to a dizzying 26th place by the time he reached Llyn Elsi lake. At this point he had managed to drop current English champion Tom Addison, and nudge in front of Tom Adams into 4th position for the British team. Despite this display of truly world class running, the strength of the field meant that there was no let up as the race entered its third and final lap.

At the front end of the race the Ugandans and Italians were battling out for 1st position with GB superstars Robbie Simpson, Andy Douglas and Chris Smith all in the top 10.  Mounsey was now working his socks off to try and help the team to medal, but sustaining the effort was a tough ask, and he admitted later to struggling through the last climb, tired and exhausted. Nevertheless Mounsey limited the damage, dropping only a few places at the top of the final climb, before getting the wind back in his sail’s to hold his position on the descent and traditional bullet-like sprint to the finish to take a fantastic 31st place,  proving his international credentials on the world stage on his debut performance. This is a remarkable achievement given the fact most competitors are professional sponsored athletes and can run a 10K in 27 minutes or less. 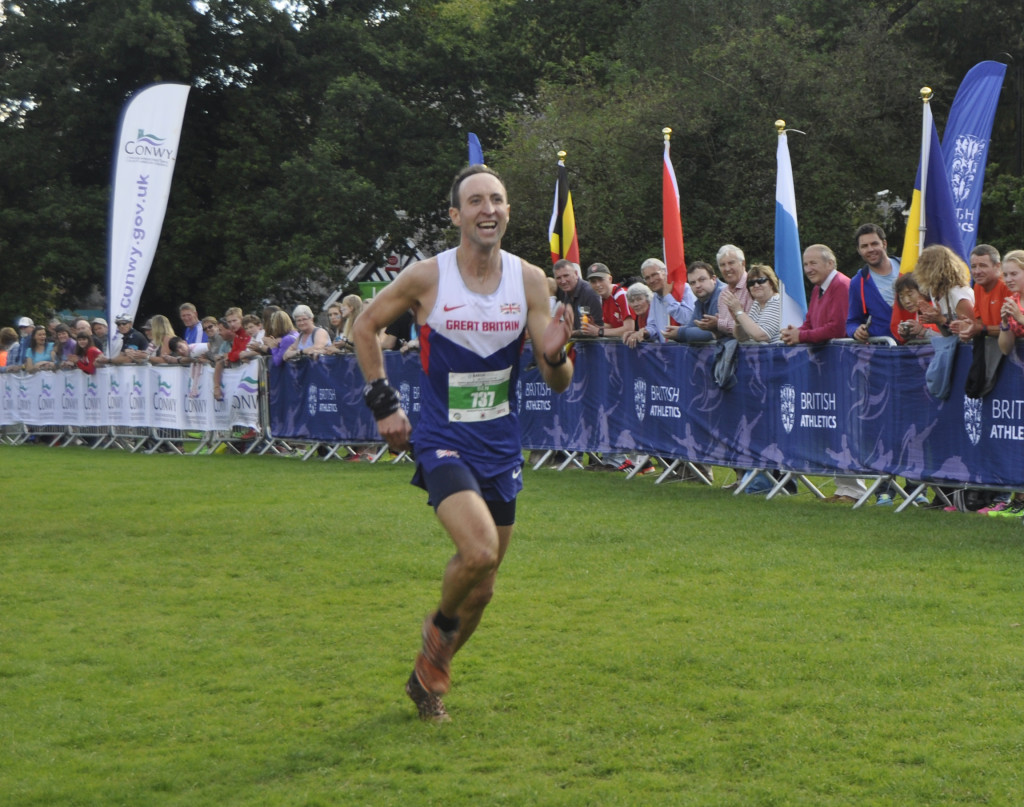 Tom Adams was just 12 secs in front in 27th position and Tom Addison finished 42nd. At the head of the race the Ugandan Fred Musobo took the win for the 2nd year running ahead of Italian Bernard Dematteus. Remarkably GB’s Robbie Simpson (Salomon running pro) based in Germany had managed to hold onto 3rd place and claim the bronze medal ahead of Bernard’s brother Martin. GB’s Andy Douglas was 6th and Chris Smith 10th, which combined with mine and Tom’s result meant we beat USA to team bronze behind Uganda in 2nd and Italy in 1st. The medalling success didn’t stop there with the GB junior girls claiming silver, the junior boys claiming bronze and the GB women proving they are easily the best in the world by winning gold. Debutant Emmie Collinge won the silver medal with Salomon’s GB poster girl Emma Clayton taking the bronze. Sarah Tunstall took 4th place with Vic Wilkinson finishing in 15th. The GB medal haul meant that they were the most successful team in the entire competition and therefore the best in the world. This was a historic moment for team GB. The Betws-Y-Coed event saw them earn the title of the most successful GB mountain running team ever.

A delighted Mounsey said “It’s been an amazing weekend, truly the best experience of my life! Earning selection into the GB squad was a massive achievement and I really wanted to prove to everyone I was good enough to compete on the world stage. Nothing quite prepared me for the standard of competition, like nothing I’ve ever faced. It seriously makes the English Championship races seem pedestrian. I’ve trained extremely hard for the event, clocking 75 miles and over 10,000ft of climbing per week and I knew I would have to be in 100% form for a top 50 finish. Last week however I rested up ready for the big day and 2 days before the event I came down with a cold!!! I couldn’t believe it! I knew I’d have to dig deep in the race and just do my best, top 50 the aim.”

CVFR Joe Washington retained his King of the Mountains crown at the weekend.  He competed in all of Britain’s highest mountains with Snowdon in July, Ben Nevis in September and Scafell just this weekend gone. His cumulative placings for all three races made him the highest placed runner and the crown was his once more. 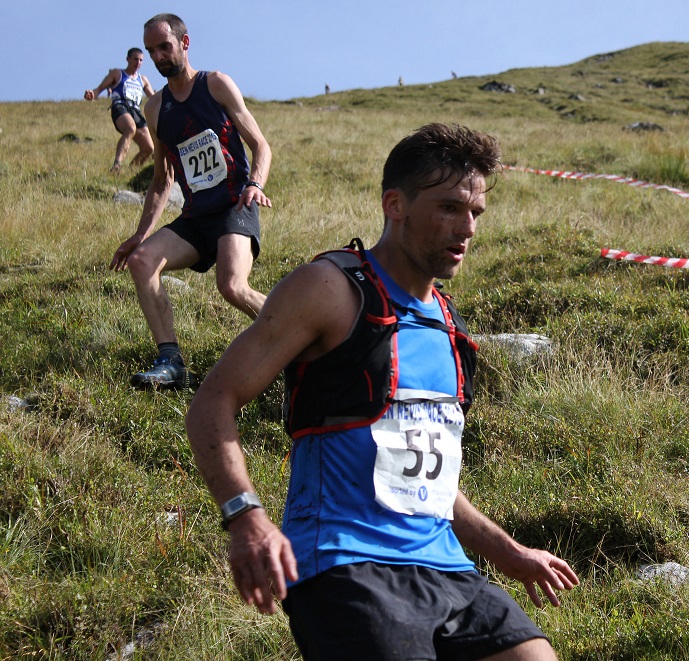 A beautiful day greeted the runners at the start line of the 13 miles Good Shepherd Fell Race. Oliver Barnes who runs unattached was out to defend his win from last year and this he duly did. The race heads up from a Dauber Bridge start to Stoodley Pike then all height gained is lost on the descent to Withens Clough Reservoir. The runners pay a visit to Cloven Stone before traversing their way around rough moor before crossing the Calderdale Way down to a checkpoint near Mankinholes on London Road. It was here that Barnes had the company of Stainlands Ed Hyland and the 2 runners had a commanding lead over the rest of the field. It became obvious that some of the front runners must have taken a longer route to this checkpoint as they approached it from a different longer path than the shorter obvious route hence losing them time including Sophie Horrocks who had been the lead female runner . Another hard climb back to revisit Stoodley Pike the ladies race became a close fought contest with Calder’s Lucy Collins reaching the Pike in 1st place. This lead was to change a few times on the return route via Cragg Road and Robin Hood Rocks with flags being missed and as the girls reached the finish Lucy sneaked to take the win with only 2 seconds to spare in a time of 2 hours * mins 55 seconds from Horrocks. A strong run home from Barnes saw him pull away from Hyland to win by 7 minutes with Stewart Gregory from Hulme Pierre taking the other podium spot. Calder’s Lindsey Oldfield getting back to some good form to take 3rd female on the day in a time of  2hours 14 mins 29 secs. 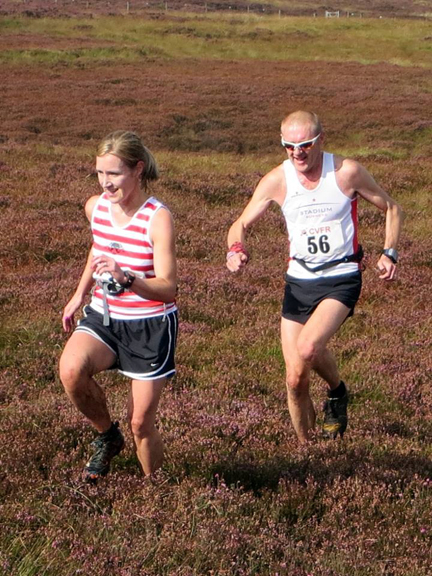