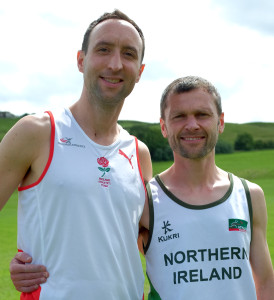 Ben & Gav, best mates and training partners, will race against each other in the Snowdon International Mountain race

Best mates and training partners Ben Mounsey and Gav Mulholland will go head to head for their countries later this month.

Mounsey will run for England and Mulholland for Northern Ireland at the Snowdon International on Saturday, July 18. The 10-mile race, which has 3300ft of climbing, starts in the centre of Llanberis. Runners climb to the top of Wales’s highest mountain via the main tourist path before descending the same way.
It’s the 40th anniversary race and will be televised on the Welsh channel S4C.
Mounsey and Mulholland both run for Calder Valley Fellrunners and Stainland Lions.
Mounsey, who is 33 and from Elland, said: “I’m delighted about my selection. It makes all the hours of training and racing worthwhile. Gav is also in the form of his life and it will be a rare occasion where we’re competing against each other.”
Mounsey, who has taught ICT, art and photography at Brooksbank School, Elland for the last 11 years, has been running for a similar length of time after concentrating on cycling before that. He has won hundreds of races and set lots of records.
“I began running on the roads and quickly switched to cross country and fell running when I realised I had a talent for climbing and descending hills and mountains. I run about 65 to 70 miles a week on average and train six to seven days a week. My best achievements have to be representing Yorkshire four times and competing for England and Great Britain at mountain running.”
It will be Mounsey’s third international appearance, having previously competed at Snowdon and in the Carnic Alps in Italy in 2011. Gaining selection this year is just as exciting as the first time. I’ve had a fantastic season so far and I’m really looking forward to the race.”
Mulholland, 44 and from Stainland, has just finished teaching at a local secondary school. He was also a latecomer to the sport. I joined Stainland Lions in 2005 and dabbled in cross country before joining Calder Valley Fell Runners in 2009, where I started competing seriously in the English and British fell championships. My best results have been top 10 finishes in the UK championship event at Kielder Forest and the brutal Arrochar Alps race in Scotland.”
Mulholland has been running for Northern Ireland since 2011 but said that his proudest achievements had come alongside Mounsey and a third Calder Valley runner, Karl Gray, in winning the Yorkshire championship five times, starting in 2010.
“This will be my fourth time running Snowdon for Northern Ireland and it’s a firm favourite.
“With five miles of continuous climbing the course suits me. I am a renowned climber – as a tiny guy it means I have a high power to weight ratio.
“However, Ben’s free-fall approach to descents is beyond me!”