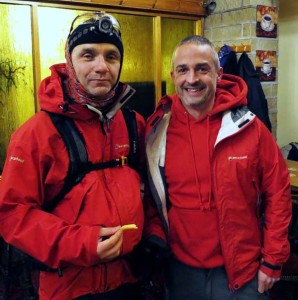 Johnnie (with head torch on) at the Whitehouse eating chips and only 35 miles into his 268 mile race.

Going from Edale and continuing to Kirk Yetholm in the Scottish Borders, the Spine Race started on the 10th January.  A different order of magnitude, this race covers the full 268 miles of the Pennine Way, and is billed as Britain’s most brutal race taking place in the depths of winter. Of course taking place in January, there are only about 8 hours of daylight so most of the race takes place in the dark.

Calder Valley’s Johnnie Watson entered the race and spent the next few days on his feet, only stopping when the weather conditions were so bad that to continue would have risked life and limb. The runners were stopped by the organisers at Hawes for several hours as 110mph winds were forecast.

Most of Johnnies club mates were watching him on their computers as he had a tracking device on and they were all hooked on his progress and in awe of what he was doing. Results are still being calculated due to the enforced stops but it seems that Johnnie came about 14th in 150 hours and 39 minutes an excellent result in an international field of Ultrarunners. The winner for the second year in a row was Pavel Paloncy from the Czeck Republic who did the whole 268 miles in 79 and a half hours.

A few days after finishing Johnnie said “It was very grim at times but there was some real moments of beauty. My feet are surprisingly ok but swollen. Legs a little sore. Still very tired and hungry all the time. (its Friday nearly week after the race and he still can’t stop eating). It will interesting to see what my final place is as I reckon my time on the course was about 5 days 5 hours.” Johnnie moved up to 12th after the recalculations. A truly amazing result with nearly 100 starters and only 46 finishers due to the grueling conditions.