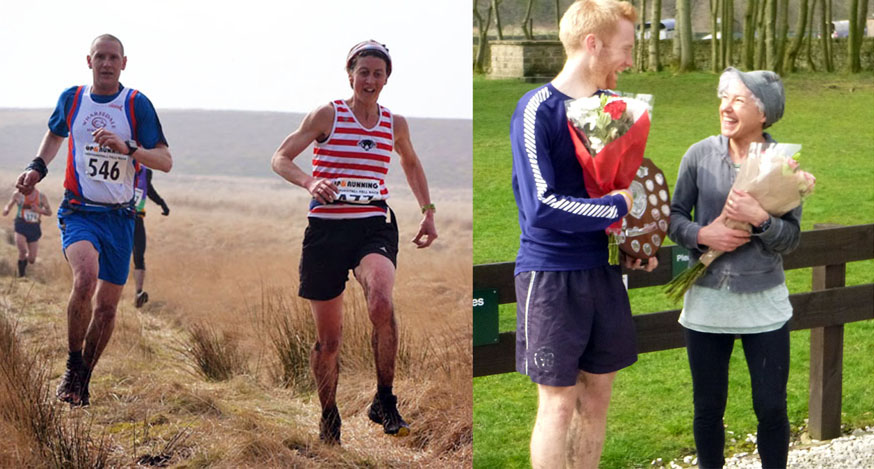 23 Calder Valley Runners were amongst a big field of 210 runners gathering on Heptonstall’s cobbles to take on 15 miles and 3200 feet of ascent over the hills and valleys of Colden Clough, Heptonstall Moor, Hebden Dale, Greave Height, Hardcastle Crags, and Crimsworth Dean.

Now in its 4th year, the race began with runners receiving their traditional start-line blessing from the Rev Howard Pask in what has become a memorable feature of this community organised event.

The race’s growing reputation encouraged an influx of potential race winners from clubs of the calibre of Dark Peak, Pudsey & Bramley,and Borrowdale, joined by a formidable force of men from the much vaunted Horwich RMI running club, intent on stealing the day for Lancashire.

Faced by this classy field of top runners, Valley’s Greame Brown was the only local representative to make the top 10. Heptonstall-based Brown finished ninth behind runaway winner Adam Osborne from Leeds City AC. Osbourne beat-off the Horwich men to take home the Heptonstall trophy for the second year running.

Osborne led all the way to win in a new course record of 1:54:10, whilst thwarting the Horwich duo of Joe Mercer (2.00.27) , and Chris Farrell (2.00.55). The Horwich pair had been hot on Osbourne’s heels until the half-way point, but, as Osbourne pulled away in the last 5 miles, his pursuers lost sight of the leader, as well as the route-flags. Lacking local knowledge, Mercer and Farrel took a wrong turning in Crimsworth Dean, scuppering any hopes of catching the reigning Heptonstall champion. The Horwich men had to be content with the team prize, secured by clubmate David Jackson finishing in 7th place.

The event was organised by runners from Calder Valley and Todmorden Harriers, based in and around Heptonstall, with tremendous support from village residents. Heptonstall Hurriers, as they are otherwise known, came up with the idea of the race as means to showcase the village, support local businesses, and raise funds for local causes.

The event has gone from strength to strength, whilst helping to create a greater sense of community spirit in the village; seventy volunteers helped to marshal, provided free refreshments, and organised parking, while the Cross Inn took over as race HQ to provide registration facilities as well as a keg of ale and bottled beer as prizes. The event raised more than £1000 for St Thomas’s Church, Mytholmroyd Scouts, and Calder Valley Search and Rescue.