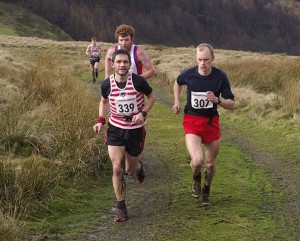 The Flower Scar fell race has long been one of the best races in the Pennines incorporating steep climbs, rough moor and fast paths. So it was welcome news when Todmorden Harriers extended the distance and climb of the race and made it a possible contender for inclusion as a medium counter in the national championships and successor to the defunct Noonstone race. Perhaps it was this that lured six times and current English champion Simon Bailey of Mercia Fell Runners to line up against some of the best local fell runners.

The race was a close contest with the cream of fell running, Bailey, only just beating Calder Valley’s super veteran Karl Gray. Gray continues to be Calderdale’s most enduring endurance athlete and this race proves he’s in great form for the 2014 championships. Another man who seems to get better each year is Wharfedale’s Sam Watson who was only twenty seconds adrift of Gray in third. CVFR’s Alex Whittem had a solid run to finish 4th.

The race climbs to the highest point in Todmorden from which the race takes its name. The Flower Scar summit is less well known than the ubiquitous edifice of Stoodley Pike, with only a loose collection of stones marking its highest point. As well as the thousand metres of undulations the race includes additional challenges of route choice as well as some very boggy sections. Both proved to be the undoing of CVFR’s Graeme Brown who managed to lose his shoe in a bog and his way with an ill-advised route choice. CVFR’s Jim Mosley also found the navigational aspects of the race a rchallenge with a wrong turn near Eagle Crag. No such problems for Race entrepreneur John Lloyd who had a good run out for CVFR to finish in eighth place.

Sally Newman had a cracking run. She was second lady behind the very swift Lindsay Brindle of Horwich, but she was over five minutes ahead of current WV50 national champion Gill Myers of Wharfedale Harriers. As long as Newman can steer clear of injury and if she fancies a tilt at the title, then on this form she’d be hard to beat in the national championships.

Allan Greenwood of Calder Valley Fell Runners organises the Ovenden Fell Race, which was traditionally run in January in previous years. The race starts near Ogden reservoir and follows the side of the golf course up a stoney track for a mile before heading right and across the moor towards the old road to Oxenhope. There are a couple of energy sapping climbs including the drag up Nab Scar, but most of the route is flattish leading to fast running. However, the record rainfall of the past month or so did make for sticky conditions across the peat hags of Thornton Moor.

Winner of the race was Calder Valley’s Gavin Mulholland, with the Northern Irish international able to show a clean pair of heels to lofty Tom Brunt of Dark Peak. Run of the day came from Johny Helliwell, however, who ran the race of his life to finish third with only a second separating him from Brunt. Helliwell was new to fell running last year, but he trains like a seasoned athlete and will surely be one to watch as the year unfolds. It was also good to see Adam Breaks back running for the Calder club again, with fatherhood putting the breaks on his running ambitions over the past year or so.

There was clear blue water between Keighley’s Amy Green and second placed Rachel Pilling of Pudsey and Bramley, but CVFR Women’s captain Helen Buchan has been piling on the training recently and finished in a well deserved third place.

Shaun Godsman was the solo CVFR runner at the Bleasdale Circle and with a small field of only 64 runners the Todmorden based fireman must have felt a win would be in the bag. But his hopes of another race victory were dashed by the presence of elite man Rob Hope who will be making another strong challenge for a national title this year. It was still a good show from the burger-loving fireman, who although second man overall, was also first Veteran.