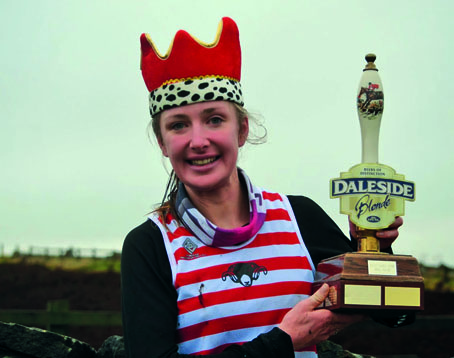 Queen Holly with her ALS trophy. Courtesy of www.woodentops.org.uk

Calder Valley’s aptly named Holly Page took the spoils at the Auld Lang Syne fell race at Howarth on New Year’s Eve. The race is a hugely popular event staged by Dave Woodhead and his Woodentops brigade who continue to shine a torch for local fell running with their unbending enthusiasm for the sport. The 9.6km/300m race is the perfect antidote to the festive excess and tends to have added cachet these days with the attendance of at least one of the brilliant Brownlee brothers. This year it was Olympic Triathlon gold medallist, Alistair, who displayed both his humility and his gratitude for the efforts Dave Woodhead has put in over the years to nurture his fledgling career. I wonder at what other sport you can rub shoulders so freely with an Olympic star, and then get the chance to run with him, as once Alistair had completed the formalities of his role as official starter, he signed some autographs, posed for a few photos, then got on his bike himself and joined the race, about five minutes after everybody else had set off. He cut through the field with the ease and grace of a thoroughbred and many runners took great delight in vainly trying to stay with him as he purred past. Good on you Alistair. Not only is the race graced by Olympic stars, but also by Donald Duck, Mickey Mouse, Iron Man, Batman & Robin, Widow Twankey, James Bond and a host of Jelly Babies to name but a few as the fancy dress New Year spirit was in full swing. But it was local lass Holly page who set an Olympic pace herself with a brilliant run on 50:41 to come in first lady and 39th overall, a scintillating run among a very strong field. Helm Hill AC’s Tom Addison took the men’s prize in 42:09and he and Holly were delighted to lift the prestigious Daleside Brewery Trophies. Craig Stansfield was first Todmorden man home in 47th. For those of you wondering, Alistair Browlee waltzed home in about 30th place. For those still needing a fix of mud and hills, the Giant’s Tooth race at Ogden on New Year’s Day provided release. Joe Crossfield, Calder Valley’s man of the month, came in second behind his close rival James Hall of Wharfedale. The two fought an excellent dual around the short 3 mile course, but for Joe it was a rare disappointment not to win in a year of such highs. Calder Valley took the team prize with Andy Fleet (5th) and hot new signing Tom Collinge (6th) ensuring Wharfedale were pushed back into second place. Caitlin Rice of Glossopdale led home the ladies in 25th place.