On Sunday, one of the marquee events of the fell calendar, the British Fell Running Relay Championships was held at Llanberis, north Wales. The event was staged at the foot of Moel Eilio, one of Snowdon’s less famed peaks, but at 726m high, a formidable foe nonetheless. One hundred and eighty fell clubs from around the UK made the trip and were superbly hosted by the local club Snowdon/Eryri who put on a mightily impressive event, full of variety, intense challenges and creative routes.

Overall, Calder Valley fielded an impressive eight teams, expertly captained and organised by Ben Mounsey, with the group meeting bright and early at 6am in Mytholmroyd. The journey down was enlivened by Rob Paradise’s renowned Yorkshire Ferret Show, which kept young and old amused, but the serious business was to begin in earnest at 10:00am, with the first of the four legs that began with a mass start.

But it was agony and despair for Calder’s Men’s Vet 40 team who missed out on a gold medal by a mere 24 seconds, after nearly four and a half hours of ding dong running. A herculean effort by maestro Karl Gray on the last leg nearly did the trick as he ran the fastest V40 time of the day by over 3 minutes; but alas agonisingly failed to haul in Borrowodale Vets, who grimly hung on for gold. Shuan Godsman had set the tone for the vets with a blistering 6th place on leg one and Irish duo, James Logue and Gav Mulholland had kept the pedal down on leg two. Despite crucial time lost on leg three, the paired navigation leg, the Vets were still in the hunt on the final leg, but it was just too much for King Karl to reel in.

Elsewhere it is difficult to know where to begin as there were umpteen heroic runs throughout the day, not just from the silver medal vets. With the weather ranging from A to B – atrocious to biblical – some of the performances, either as singles or in pairs will live long in the memory. The weather was truly awful at times but mention must go to the following who put in memorable runs. Calder C team, who finished 38th overall, can thank the sheer doggedness of Ben Frechette and Mark O’Connor who upstaged the B team to finish ahead of them on leg 2. Then the navigational brilliance of Ian Glendinning and Lee Beardy Shimwell who made mincemeat of the paired leg 3, waltzing round in 30th place, just two places behind the equally impressive B team comprising ultra fiend Ian Symington and the old pro himself, Bill Johnson.

The ladies were also flooring it in in fifth gear with England stars Jo Buckley and British Champ Helen Fines teaching the men a thing or two with a rapido 68th place on leg 2, which was all the more impressive as the weather by now was akin to being sat in a washing machine. On leg 3, the teak-tough pairing of Barbara Lonsdale and Sally Newman made short work of the map and compass and rubbed shoulders with the men in a fantastic 88th place.

Back to the men and on leg two, captain Ben Mounsey and Alex Whittem (pictured) strained every sinew to stay with the heavyweight names such as Rob Jebb and Ian Holmes and can be mightily pleased with their superb 7th place. But perhaps the pick of the bunch and was on nav leg three where Tim Ellis and Heptonstall’s Graeme Brown embarrassed a raft of big names to come in a quite brilliant 6th. Visibly spent as they both finished, Graeme was to end up in A&E later on with torn ankle ligaments. That, as Roy Castle once said, is dedication.

All in all, a brilliant effort from all in the CVFR squad who made the trip, with the women’s B, the men’s V50 and the men’s All Stars also putting in some amazing runs. Culpan, Whitehead, Davy, Wisbey & Murgatroyd et al. Rather like the Ryder Cup in golf, the event draws the very best out of people, amateur sports men and women at that too. A day to remembered indeed. 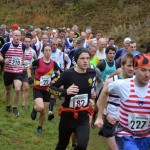 its all go at Withens Skyline
www.woodentops.org.uk

Calder Valley’s Tim Ellis continued his excellent summer of Lakeland fell races with an outstanding third place at Saturday’s Langdale Horseshoe race. This marvellous race is rightly regarded as one of the best in the calendar, taking in 16.5 miles and 1450m climb of arguably England’s finest scenery. A race for novices, it is not.

Decent weather prevailed, albeit quite windy and fresh up on the tops and the clear skies proved a godsend for many runners as low cloud and mist can often play havoc navigationally. Instead, runners were left to wrestle with nothing more than shin splitting descents and thigh burning climbs as they weaved their way up and over most of the main peaks of the Langdale Valley. The race was won by local star Ben Abdelnoor in an impressive 2hrs 7 mins, with Tim helping Calder into second place overall in the men’s team event, James Logue (13th) and rising star Joe Crossfield (18th).

Newly crowned British champ Helen Fines was second overall in the Ladies’ race with a splendid 55th place and Barbara Lonsdale 14th in a super time just over the three hour mark.

At the ever popular Withins Skyline race at Howarth on Sunday many Calder runners made the short trip over Cock Hill for the 7mile/1000ft mud splash across Bronte Country. Cader’s Graeme Brown, still in search of a pair of shorts, finished in a superb 6th place behind winner and new course record holder Tom Adams of Ilkley. Tom broke Olympic Gold medallist Ally Brownlee’s record from 2006, admittedly set when Alistair was a mere slip of a lad. Mark O’Connor, after a blistering start, faded somewhat to be next Calder man home in 34th.

First Calder lady home was Graeme’s other half Kate Mansell in a solid 158th place. The event is another of the Woodentops Fell races laid on by the irrepressible Dave Woodhead, who must be commended for his sheer enthusiasm and passion for the sport. Even more so for his endless prizes that he merrily dishes out afterwards in The Sun Inn where the majority of runners convened to partake in the fun afterwards.

While the LCT website is (hopefully temporarily) out of action, here are the results in the Lakeland Classics Trophy after the final race:

P.S. Shaun/Logie: don’t worry about what happened today, no one really reads my emails anyway so perhaps no one will ever find out ? 😉