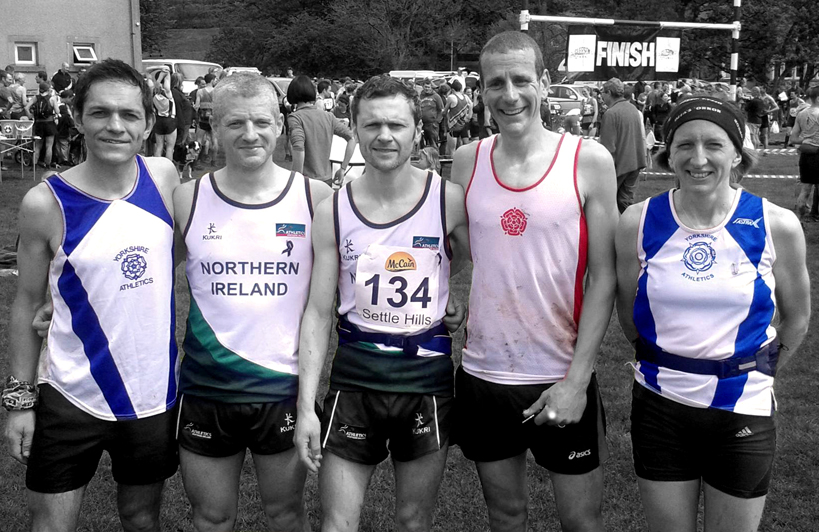 This years’ Settle Hills Fell Race was selected for the Fell Runners Association Inter Counties Championship and attracted some of the best fell runners in Britain.

Max Wharton had the performance of the day winning the under 18 men’s race by just two seconds from Iolo Hughes from North Wales. Max can now look forward to running for England in the Junior World Cup to be held in France. Max’s Yorkshire team mate, James Hall, was third and therefore securing the team prize.

The senior men’s race had three Calder Valley representatives, John Smith (61), Mark Wharton (70) and Graeme Woodward (107). There were a few more CVFRs representing their county though, Gav Mulholland (13 Northern Ireland), Karl Gray (14 Yorkshire), Shaun Godsman (16 Lancashire) & James Logue (17 Northern Ireland). And it must have been a great race as they finished within seconds of each other.

Karl was on the Yorkshire winning team with Tom Adams (3) and Adam Osborne (8) and Shaun got a bronze medal with Rob Hope (4) and Gary Priestley (9) of Lancashire. Just missing out on the medals, finishing in fourth, were the Northern Irish lads along with David McNeilly (44).

Race winner and a future name to look out for was Wegene Tafase an under 23 running for Scotland West.

In the women’s race it was a Yorkshire 123 with from Emma Clayton, Victoria Wilkinson and Katie Walshaw in that order taking the medals and the first team prize. Helen Fines, also running for Yorkshire finished in fifth but just missed out on a team place.

With many of the Club’s best runners competing at Settle the strategy was to enter a strong mixed team of six men and six women over the six legged relay. The relay starts very early at 8am from Halifax and leg 1 ends at Cragg Vale. The leg 2 runners visit Stoodley Pike before handing over at Todmorden. Leg 3 is a shorter leg and permits older juniors to be paired up with a senior enabling them to get a flavour of the event. Next handover is at Blackshaw Head where leg 4 runners set off on possibly the most challenging leg ending at Wainstalls. Leg 5 ends at Shelf before the last leg ends back at race HQ at West Vale.

Calder Valley entered four mixed teams and the tactics paid off with the mixed ‘A’ team retaining the title that they won last year.

In much worse weather than the following day a hardy bunch of CVFR headed to North Wales for the Cader Idris race. Described by one of them as a proper, tough, five mile up ‘n five mile down mountain race with just shy of 3,000 ft of climb, an excellent festival atmosphere in the town and a London marathon style digital clock welcoming you at the finish where better for a Stag do’?

The race was won by local lad Ifan Richards in 1:31:02 with Tod’s Lauren Jeska winning the ladies race (although she was running for Aberyswyth AC?).

A cracking weekend away was had by all on Richard Ingram’s Stag Do and a superb run from Ben Frechette to come in 24th, who having pushed himself so hard required a visit to A&E after suffering from exhaustion, acute de-hydration and a broken finger nail.