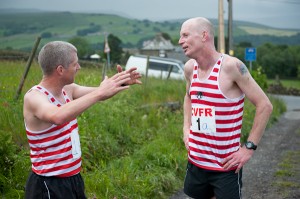 Team mates James & Jason discuss race tactics after 3 days of racing against each other. Photo courtesy of Tom Rattray

Calder Valley Fell Runners hosted their annual “Midsummer Madness” series of fell races, which sees runners compete in three races held over the weekend, either for individual race glory or for the prestigious series title.

The series is former club president Bill Johnson’s mastermind and it all kicked off at Friday night’s short and sharp Wicken Hill Whizz fell race. Amidst a wall of rainfall and high winds and against a backdrop of warning sirens, the madness moniker seemed appropriate as runners made their way up the 1,000 foot climb from Mytholmoyd to the summit on Midgley Moor.  Calder Valley’s Jason Williams, who was making his annual pilgrimage to the series, led the charge to the summit at Sheepstone’s trig point, the halfway point in the race, where runners turn to retrace their steps.

On Saturday, some of those runners returned to race in Saturday’s Reservoir Bogs Fell Race, which sets off from the Hare and Hounds in Chiserely, high above Hebden Bridge.  The rain that had pounded the moor on the previous day made underfoot conditions very taxing.

With runners only finding out the route when they register to run on race day, the event is as much a navigational challenge as it is a fell race.  So it was no surprise to see Calder Valley’s expert orienteering pair of James Logue and Heather Gardner taking their respective wins, the imperious Logue finishing eight minutes in front of second placed Jason Williams.  It was a clean sweep for Calder Valley’s men with Andy Thorpe finishing just two seconds adrift of Williams for third. Dorothy Pelly of Ambleside was second lady, ahead of Calder’s super vet Sally Newman.

The series finished on Sunday with the Tom Tittiman race, which visits the High Brown Knoll trig point.  With Jason Williams and James Logue tying on points and with Joe Crossfield scoring highly in the previous two races it was very much all to play for.  On the day, James Logue had a great run putting a minute between him and second placed Williams, with Crossfield just twenty seconds further back in third.  Andy Thorpe also completed the series, finishing in fifth. Heather Gardner continued with the previous day’s success by finishing as first lady ahead of Wicken Hill winner Kate Mansell.

Logue ran out series winner, just a single point ahead of Williams with Crossfield first u23 series winner and third overall.  Stainland’s Aileen Baldwin was first lady having competed in all three races, not bad for a vet 60!

On Thursday Calder Valley’s Tim Ellis continued with his winning streak to make it a fifth race win this year at Aggie’s Staircase in Darwen.  The race features some fast grassy running and it climbs 1150 feet in in 4 miles. Ellis was a minute clear of junior Dominic Mahoney with Clayton’s Andy Brown in third. In a repeat pattern of the men’s race Calder Valley’s captain Helen Fines was first lady from Blackburn’s young star Beckie Taylor. Steve Smithies also had a good run out to finish in 13th place.

Also on this evening our Lancashire based runner, Tim Ellis, continued his fine form winning Henderson’s End Fell Race from Rivington Barn, Horwich. This is a 6 mile race over Winter Hill with an 800ft climb. Of the 73 runners who completed the course, Tim was the only Calder Valley member.

Over the Jubilee weekend some of our Calder Valley team mates had something to celebrate.

At the European selection race at Sedbergh on Saturday one of our future stars Max Wharton placed a fantastic 3rd place and earned himself a GB vest to run in the under 19s race which takes place on 7th July in Turkey. Awesome result when you consider that Max is only 15!!!!!!

At the local Jubilee race on Sunday from Wadsworth Tim Black took 1st place and with Robert Paradise and Mark Wharton sealed 1st team prize. Not to be outdone the ladies followed suit with Holly Page 1st lady and with her team mates Trudi Entwistle and Kate Mansell also sealed the team prize.

At the tough Helvellyn 24km race in the Lakes Tim Ellis is showing some excellent form taking the win from Paul Cornforth of Borrowdale by nearly 5 minutes. It was also good to see Steve Smithies coming back to racing after injury placing an excellent 12th.

And hot off the press Holly Page and Helen Fines have been selected to run for England at the International Snowdon race in July. It’s all happening.